SellYouLater.com is the best art website to come along in some time. Since starting in early February, it has been rebranded as ArtRank.com, but the old name seems more appropriate. They rank artists as “buy” or “sell” based on a secret mathematical formula (don’t you love that!). They claim to use algorithms to identify “prime emerging artists based on qualitatively weighted metrics, including Web presence (verified social media accounts, inbound links), studio capacity and output, market maker contracts and acquisitions, major collector and museum support, gallery representation, and auction results.”

Come on. This is great stuff. You never did that at home! These guys have used “math” to break every art market taboo and in the process have captured the art world zeitgeist. Sure, people make believe they are looking at the work, they make believe they are interested in art and what it says about the world, but let’s face it, real art-talk sounds archaic in the world of the now, where most conversations quickly circle back to last week’s auction prices. There have never been as many speculators, flippers, scalpers and small-time punters in the market. The hooligans of today far outnumber the old-school collectors.

SellYouLater.com is the epitome of where we are at. It has so many amazing things going for it that I don’t know where to begin. The stock market is full of tip sheets that provide insider advice for long investors, short sellers, yield hogs and junk-bond floggers. It’s about time someone did one for art, especially now that all people really care about are prices.

When SellYouLater.com first came out in early February I thought it was a joke, the best joke I had seen in a long while. The idea of listing artists in columns titled “buy now,” “sell now” and “liquidate” was genius—it was totally inappropriate and broke every rule in “proper” art collecting. To list artists strictly by their market value and the direction in which their prices appeared to be going reduces art to a pure investment. Yes, I know that the markets for Mark Flood, Alex Israel, Sam Falls and Joe Bradley are on the rise, but I never thought of them as “Buy Now <100k.” (P.S. Most of them are already over a hundred on the secondary market.) The real fun of the website is in the “sell now (peaking)” category. Here I found artists that I thought were still going up, and yet SellYouLater.com algorithms were telling me to dump them. These included young but established artists like KAWS and up-and-comers like Walead Beshty.

There were moments when I disagreed. The algorithm for Lucien Smith says his prices have gone too high, and perhaps they have, but might they keep going higher, instead of taking a turn? I dispute the conclusion that Dan Colen and Tauba Auerbach have peaked—I feel their best is yet to come—and I have good reasons to feel that way. Even in the case of Lucien Smith, I suspect his market success will become a self-fulfilling prophecy. Remember the stock trader’s classic rule: The trend is your friend.

No matter, SellYouLater.com is a must-read. Where else can you find a column of artists listed as “liquidate (down)” that includes the poor victims of the 2008 crash, like Anselm Reyle, or read a “diss” about the street artist Banksy? I was surprised to see Nate Lowman, Adam McEwen, Sterling Ruby and Oscar Murillo on the liquidate list. Wasn’t it only months ago that these guys were solid buys? SellYouLater.com’s algorithm says holders (I no longer call them collectors) need to about-face and dump these artists as fast as they can. Which brings me to the only real problem I see with SellYouLater.com: By the time I’m supposed to sell, it’s already too late! Never forget, you can only sell art when others are buying it. The market for a given artist goes cold in a flash: As soon as there are no bids, everyone jumps out as quickly as they jumped in, and the art becomes unsellable. It becomes totally illiquid—a scary feeling and, yes, I’ve been there.

We’re in a pretty scary moment in the cycle. The number of people flipping works of art has never been higher, and they will keep on pumping up prices until the music stops. When it will stop is anyone’s guess, but certainly websites like this one are a telltale sign that we have entered a whole new phase. One can semi-plausibly argue that a Bacon, a great Picasso or a Warhol is a rare and precious thing and that in the 21st century we will always see more buyers (many of them from outside the U.S.) than there are works available. The young stuff is another matter altogether. Artists go on making it every day, and the higher it goes, the more they produce. The market now is rife with speculation and getting hotter by the day. Today, everybody’s a wise guy looking for an angle.

A guy gets offered a picture for a buck and thinks: Why just tell the seller “yes” or “no”? Why not be a player and re-offer it to 10 other guys you know for two bucks? Maybe you can buy it yourself for 85 cents and sell it for $1.50, or better  yet, just flip it without buying it. This is, after all, trading tulips; no one really wants to smell them roses. Collecting is now an anachronism. Some people are still doing it, but they have become the minority. The new generation is in it to win it, and it’s very bold and not risk averse. It will dive into anything that has buzz and hype and feels like it’s going to the moon. What’s ironic and sad is that some artists’ careers now seem to end only months after they began. This means we won’t get to “sell them later,” because there won’t be any “later.”

What if all these “SellYouLater.com” flippers suddenly panicked and tried to SellYouNow? Scary thought. Ah, forget it, I’ll worry about that later. 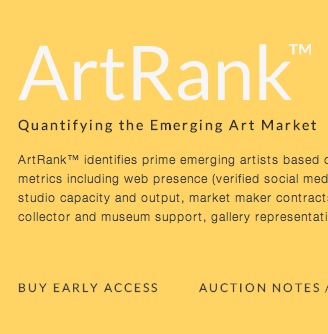