CLIFTON – Getting on 2012 game faces for the May 13th 2014 mayor’s race, leaders of Paterson’s Arab-American community and the Democratic Party crowded into a banquet room in the Valley Regency last night and rammed the candidacy of Council President Andre Sayegh.

“I’m all in on this race, and I’m ready to double down,” said Pascrell, who sat at the front of the room with Currie and Assemblyman Benjie Wimberly (D-35) days after the Arab-American Screening Committee organized by Abdelaziz awarded its endorsement to Sayegh.

“Some of the candidates were great,” beamed emcee Salaheddin Mustafa, reflecting on a seven-hour long candidates’ screening exercise.

“Some of the others – Joey – weren’t,” he cracked, a jibe at Sayegh’s competitor, former Mayor Jose “Joey” Torres, who had his own fundraiser earlier this week with former Mayor Pat Kramer.

“Oooo-ooh, I’m scared,” a Sayegh supporter said when PolitickerNJ alluded to the partnership of the former mayors.

Many in this room see the mayor’s race as a two-man contest, with a wounded incumbent Mayor Jeff Jones giving Sayegh a chance to cut into the African-American community. The presence at last night’s fundraiser of Currie and Wimberly in part spoke to that intent – and to the commitment of the party to Sayegh’s candidacy.

But the council president needs to drive strong numbers out of the 6th Ward, home to the city’s middle-eastern voting bloc.

“The time has come for the Arab-American community’s input to be considered,” said Abdelaziz, co-chair of the Paterson Democratic Party and chief Arab organizer, who with Sayegh manned Pascrell’s 2012 GOTV operation in the 6th.

“If it comes up, it’s something I’d have to consider,” he told PolitickerNJ.

Currie sat at a table occupied, among others, by Pascrell, Wimberly and Clifton Mayoral candidate Lauren Murphy. When he went to the front of the room he said Abdelaziz was like a son.

He took precise aim at the Jones Administration, a criticism that at one point – as recently as two years ago – did not come easy for the chairman, who wanted Jones to succeed; who in the beginning quietly celebrated Jones’s evangelizing intellect.

But Currie’s had enough of Jones at this point. “The last four years have been an absolute disaster,” he said.

He wants Sayegh to win.

“I have seen Andre grow and mature. Farhanna [his wife] and his daughter Sophia have made a big difference. He wants to raise his family in a safe city. We have to make Paterson safe. I see Paterson coming back.”

A Silk City native who no longer resides in the city, Currie emphasized the relationship Sayegh has with Pascrell, and the need to properly distribute resources to Paterson. “I don’t have a vote, but I have plenty of family members with a vote,” he said.

Then the chairman turned and faced the candidate.

“I wish you luck, I wish you success, and I look forward to swearing you in as the next mayor of Paterson,” Currie said.

Then Pascrell went to the front of the room.

“Thank you for what you did,” he said, recalling Paterson’s upsurge of support for his father in 2012. “When the chips were down, the first people who answered the bell were the people in this room.”

“I grew up in Paterson,” Pascrell added. “And you know what I find disturbing? When my father kicked off his candidacy for Congress in front of the house I grew up in, a newspaper reporter pulled me aside and said, ‘He doesn’t really live here, does he?’”

Pascrell let the comment sink in amid some mumbled woe.

“They don’t think a man who is relatively successful, who walks the halls of Washington, lives in the town he grew up in,” said the congressman’s son, who believes Sayegh would help turn around the city.

“This is a good man,” he said of the council president. “A church-going, God-fearing man. When the bell rang this man stood with us and campaigned until the last door was knocked on. I have a commitment to a good human being who’s going to be the next mayor of Paterson.”

Sayegh next gripped the microphone.

His mother was born in Syria, and drove a bus as she raised her two sons.

The candidate alluded to worries about a non-black or non-Latino mayoral candidacy. “There’s been far too much division and not enough vision,” said the council president, who spoke of his record opposing deadbeat bars and clubs, including the Lava Hookah Lounge.

“We shut it down,” Sayegh said.

When he mentioned the place, a groan ensued, and someone sitting at a nearby table explained that some in the room, in fairness, had been happy frequenters of the lounge.

Not everyone in the Arab-American community backs Sayegh, and at least one leader criticized the origins of last night’s event.

Attalah said Democrats pushed out the biggest names in the Arab community.

“Nobody represents the Arabic community,” said the activist. “We don’t have the structure to endorse any candidate. We have always been an independent community. We voted for Chris Christie and we voted for [Democratic Passaic County Sheriff] Richard Berdnik.

“The fact is we need a tough, independent person to be mayor,” Attalah added. “That Crooks Avenue shooting – it’s in the heart of Andre’s district, and he’s talking about promoting tourism. Protect the people first. Paterson needs a tough individual, not a yes man.”

Political insiders – like at-large Paterson Council candidate Maritza Davila – abounded at the Sayegh event, with legs in contests here and around the state.

The talk ran to CD12, for example.

“I think Linda is like Pascrell,” one operative, speaking on condition of anonymity said of 12th Congressional candidate state Sen. Linda Greenstein (D-12), who’s in a rundown right now with Assemblywoman Bonnie Watson Coleman (D-15) for the seat of a retiring U.S. Rep. Rush Holt (D-12).

“Yes, Pascrell won with a huge plurality out of Paterson, which is what Linda will need to have in Middlesex,” the source said. “But Pascrell won because he got 27-28% of the vote in South Bergen. He limited [Steve] Rothman’s ability to secure his base county, which is what I think Linda will do to Bonnie in Mercer. Linda will get around the same percentage of votes out of Mercer that Bill got out of South Bergen; and Bonnie won’t penetrate Middlesex. That’s the race.”

The talk, too, ran to the internal review of Gov. Chris Christie’s role in Bridgegate, which exonerated him. “The governor had a good week,” said an insider, speaking on condition of anonymity.

“The resignation of David Samson changes little about how this scandal unfolded,” the state party chairman said. “After we learned that New Jersey citizens were put in harm’s way — stuck for days of gridlock for no good reason by the Governor’s top aides — we expected Governor Christie to be truthful and contrite. We needed him to demonstrate a genuine desire to make amends, and to cooperate with a real independent investigation. Instead, he chose defiance, diversion and delusion.” 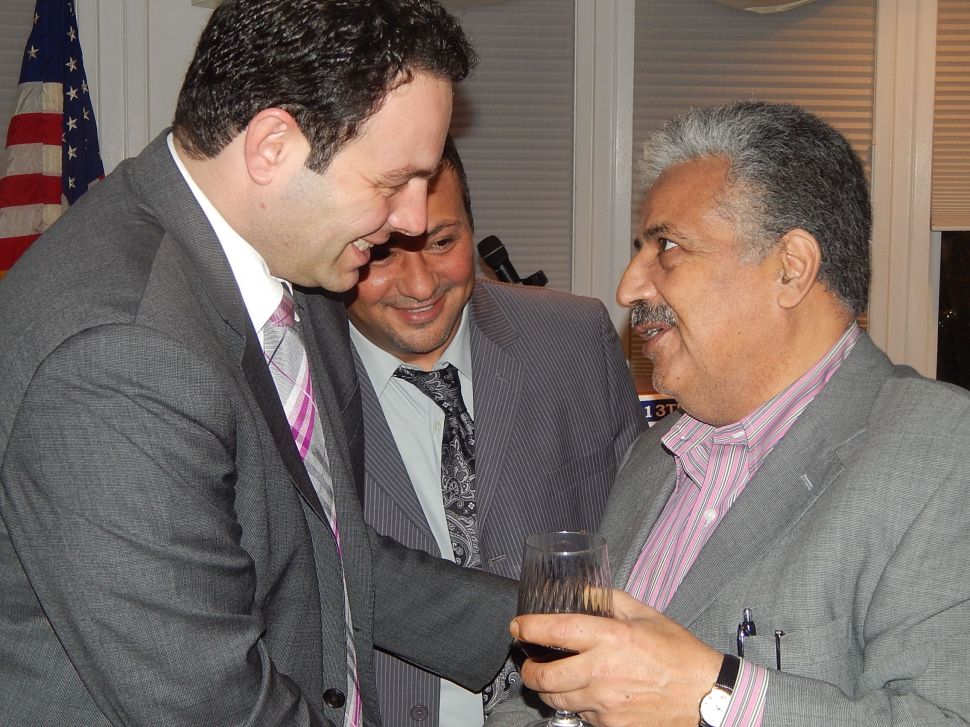