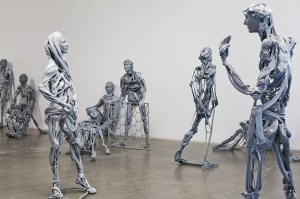 The Polish artist Pawel Althamer has been well known among art audiences for more than a decade—his image of gold-suited Polish tourists graced the cover of Artforum back in early 2011—and now he is getting a solo U.S. museum show, “The Neighbors,” curated by the New Museum’s Massimiliano Gioni. It provides a look at his particular brand of self-serving collaboration.

In the lobby, 50 New York street musicians will perform over the eight-week run of the show. A man was freestyle rapping, monotonously, when I arrived. This sound is piped to the upper-floor galleries. On the first floor of the exhibition are dozens of grim, gray, cast and extruded plastic sculptures. These creepy, skeletal Giacometti-esque men and women, often missing limbs, look like so many zombie movie mannequins. They wear the faces of Venitian citizens Mr. Althamer cast when he made these works for last year’s Venice Biennale, also curated by Mr. Gioni.

In each of the four corners of the gallery, projected videos play. In one, the artist takes LSD: “The conquest of the Earth has begun,” he announces. He is in his 40s, a tall man with close-cropped graying hair. “My ergonomics make me happy,” he tells a friend as they walk around a forest hugging trees and examining dead insects. In the other videos, he does magic mushrooms, smokes hashish and takes a truth serum. He also watches a baby being born. It is a not a terribly interesting set of experiences to watch in a museum.

On the second floor, we encounter Mr. Althamer’s “collaborative” projects, such as his ceramics workshop for people with multiple sclerosis. One sculpture resulting from this workshop, Sylwia, 2010, is a traditional figurative nude of a woman lying on her back. It is constructed in a fragmentary style, as if everyone in a group was assigned to make one body part—a thigh, a right or left breast, etc. The result is an unsettlingly disjointed representation of a woman. Other sculptures include a tiny girl made of hay, hemp, animal intestines and a human skull, and a large ebony figure carved in the style of an African totem. This latter, Black Market, 2007, had what the wall text describes as “unskilled” African immigrants in Poland carving the items—a cell phone, cup and chair among them—out of ebony, working on site in Mr. Althamer’s Berlin gallery during the exhibition. 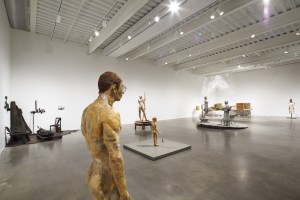 This brings us to the kinds of questions people frequently ask about Mr. Althamer’s work: Is it exploitative to collaborate with individuals—disabled people, illegal immigrants—who have no access to power in the global art system, then use their labor and call it your art? All of the pieces here are examples of Mr. Althamer’s art; he alone gets the glory of having his name on them. The African immigrants—or people with multiple sclerosis—become human ingredients alongside animal intestines, goatskin, ebony or human bones, to create fairly creepy sculptures. The faces are pulled from Venetian locals. The work is deliberately repellant, and such questions and concerns about collaboration and exploitation are built into the sculptures themselves.

On the top floor, there is a public painting room in which visitors can don white coats and paint newsprint, posting the results up on the walls. It’s Relational Aesthetics 101—pure audience participation. The notion of everyone making their own paintings sounds democratic, but the process makes anyone who participates look like a child in an after-school program, and once again, the work itself is, ultimately, Mr. Althamer’s own.

Some writers, like Claire Bishop, argue that Mr. Althamer, who grew up under communism, is using institutions to harness resources for marginalized communities. I’m not so sure. “The Neighbors” looked like an ambitious man obsessed with his own subjectivity who, by harnessing the labor of others, was accruing cultural capital in a global art market—for whom, as he said of his own LSD trip, “the conquest of the Earth” had begun. The strategy he employs will be familiar to anyone who grew up with Facebook—we supply the content, and even our own images, and someone else puts a name on it and sells it.