The NYPD is getting a handle on subway crime, which should make panhandlers very nervous.

Arrests for peddling and panhandling in the New York City subway system have tripled so far this year, according to Transit Bureau statistics. More than 270 people have been handcuffed as of Sunday, compared with just 90 in the same period in 2013.

The NYPD began the initiative after increased grumbling from straphangers. This was the first big push in Commissioner Bill Bratton’s campaign to address quality-of-life issues, and it is working: arrests and complaints on the subway have decreased since the initiative began.

Commuters have championed the plan, as panhandling has become more prevalent in recent years. “I’ve been on the train when two guys asking for money were in the same car, and they got in a fight over whose car it was,” hairstylist Leticia Diaz told the Wall Street Journal. “That’s when it’s too much.”

Mr. Bratton is a proponent of the “broken windows theory” of policing, which targets minor crimes as a deterrent for more serious offenses.  He has even hired George Kelling, the man who developed the philosophy, as a consultant; the two will go on late night subway rides to assess the problem further.

The NYPD data further shows that stop-and-frisk arrests in the transit system have dropped 96 percent so far this year, from 5,983 to 353. Also, fare evasion summonses have  increased, while arrests for the same offense have decreased. Fare evaders are now only arrested if they have prior offenses.

So take heart, commuters: that guitar-playing hobo who gets underfoot will soon be under arrest. 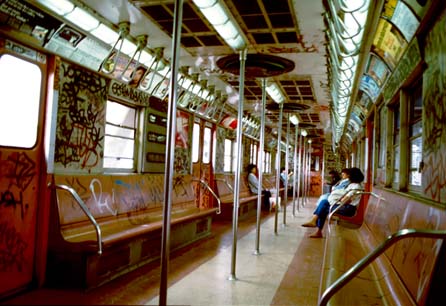