City politicians want to give plastic bags the sack.

City Council members relaunched efforts this morning to reduce plastic and paper bag use, introducing new legislation that would place a 10-cent fee on every non-reusable bag distributed at grocery stores.

The bill, sponsored by council members Margaret Chin and Brad Lander, is not the first effort to attempt to cut back on the bag. Mr. Lander proposed similar legislation last August, but it never made it to a vote.

Speaking from the City Hall steps this morning, Mr. Lander stressed the difference between the new bill and previous failed efforts. “It’s not a tax; the retailer will keep that charge. They’re selling you a product just like any other product they sell,” he said. “Retailers will charge a 10-cent charge per paper or plastic bag.”

Mr. Lander’s fellow backers emphasized the bill’s positive implications for the city’s environment and finances. Ms. Chin called plastic bag litter “one of the most pervasive environmental problems facing our city today,” claiming New Yorkers use 5.2 billion plastic bags per year: a mass that requires an annual $10 million in city funds to transport to landfills.The bill aims to reduce the number of bags used by up to 90 percent.

But not all council members are on board with the bill. Councilman Rory Lancman of Queens opposes the bill, citing the possible burden on low- and middle-income families.

“I don’t think we should make policy based on inflicting pain in order to change behavior,” Mr. Lancman told the Observer in an interview. According to his calculations, the proposed fee could cost families as much as $150 a year–“serious money” for for those with little to spare.

“People of higher incomes can afford to keep using [plastic bags],” Mr. Lancman said. “If plastic bags are so hazardous, we shouldn’t establish a system that allows people with the means to continue using them.”

The new bag bill would include provisions for low-income families, with people who receive SNAP or WIC benefits exempt from the fee, Mr. Lander said. But Mr. Lancman said that wasn’t enough, arguing that, “most working poor are not receiving food stamps.”

The bill, which still must go through required hearings, is so far co-sponsored by 19 council members, according to council records–just a handful shy of a passing vote. Speaker Melissa Mark-Viverito is reviewing the legislation, according to her spokesman. Speaking yesterday, Mr. de Blasio indicated he supported at least the bill’s aims. 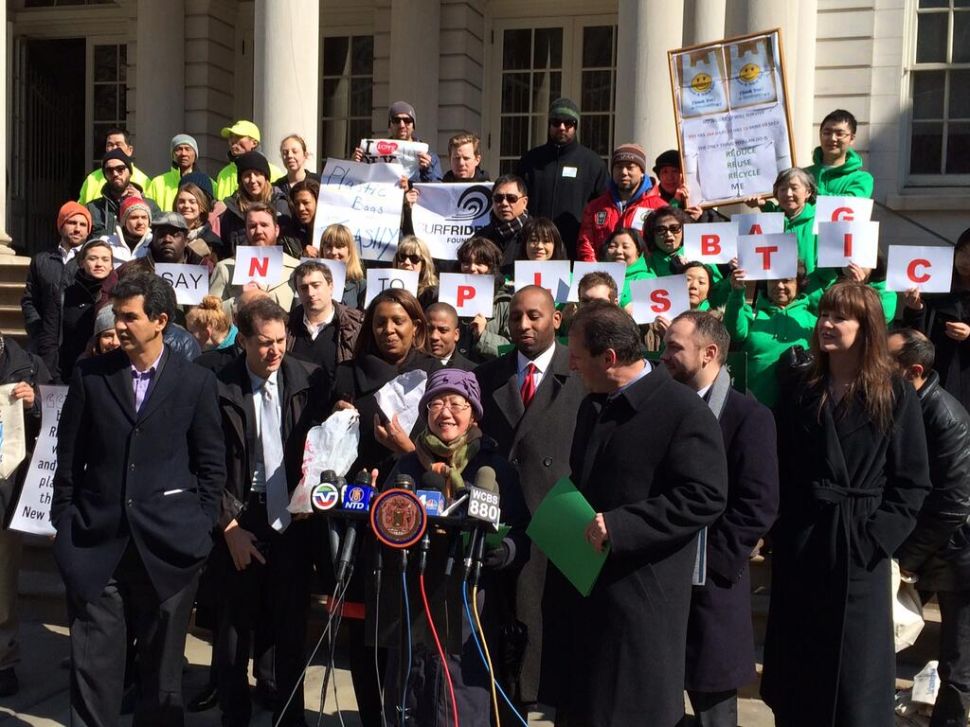