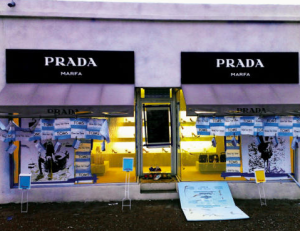 Marfa Public Radio reports that the Michael Elmgreen and Ingar Dragset sculpture Prada Marfa, located on a strip of U.S. 90 about 26 miles outside the eponymous town since 2005, has been vandalized with spray paint, platitudes and the logo for the shoe company TOMS.

The perpetrators left fliers at the store-shaped sculpture that, in a manifesto of sorts, decried TOMS for recent partnerships with high-end retailers, the kind that might also sell Prada. (TOMS, always a for-profit company, donates one pair of shoes to a person in need for each pair purchased—wait, could this be viral marketing?)

The levels of irony are tough to parse here because, far from being an actual Prada store, the sculpture is itself a (fairly clear!) critique of the pervasiveness of luxury culture. As such, it was always supposed to be vandalized. Here’s Yvonne Force Villareal, co-founder of the New York-based Art Production Fund, which installed the sculpture for $80,000:

“We loved this proposal for many reasons,” Ms. Villareal said. “We loved the idea of the piece being born on Oct. 1 and that it will never again be maintained. If someone spray-paints graffiti or a cowboy decides to use it as target practice or maybe a mouse or a muskrat makes a home in it, 50 years from now it will be a ruin that is a reflection of the time it was made.”

So all this is according to plan. In fact, the piece has been vandalized once before, when shortly after its debut someone stole the shoes that Miuccia Prada had donated for the interior. (Ms Prada had also condoned the use of her name on the sculpture.)

Perhaps because of Ms. Prada’s minor collaboration, people are frequently confused about the sculpture’s origins. Neither Marfa Public Radio nor the Associated Press list the names of the artists in their stories about the latest act of vandalism.

Late last year, the Texas Department of Transportation deemed the sculpture an “illegal outdoor advertising sign” in violation of the 1965 Highway Beautification Act. This ruling was spurred by a new Richard Phillips piece just outside Marfa, which cropped up over the summer and received the same classification from the TXDOT, shortly before they went after Prada Marfa. The Phillips incorporated a neon Playboy logo and was in fact paid for by Playboy, which makes a stronger argument for it being an illegal outdoor advertising sign.