MOUNT LAUREL – Gov. Chris Christie’s latest town hall was crashed by at least a half dozen protesters who shouted questions at the governor during the event.

At least six people were ejected from the town hall meeting as the governor took questions from residents. The individuals were led out by police as Christie ignored their attempts to catch the governor’s attention.

“This is a coordinated partisan effort,” Christie told the crowd after the first couple of hecklers were ejected.

“I don’t know who these folks are but in the end, understand something,” said Christie, “When people get up and yell and scream and divide, they shut down the discussion.”

A number of the protesters identified with the left-leaning group the New Jersey Working Families Alliance.

“[The governor] needs to be held accountable for his actions,” said 21-year-old Leah Ly, who was among the protesters ejected from the event.

She said the governor needs to be held accountable “for Bridgegate, for not allocating Sandy funds where he should have and for the fact that we are systematically denying African Americans and Latinos Sandy aid.”

Another protester led out of the town hall by police, 19-year-old Rowan University student Michael Brein, said he shouted out because he knew Christie wouldn’t call on him based on the way he was dressed.

“They don’t want an answer from me,” said Christie, who told the first heckler to “either sit down and keep quiet or get out.”

“If they wanted an answer from me they’d wait and ask a question,” Christie said.

The governor declared the hecklers were only interested in gaining the attention of the press who attended the town hall.

Here’s video of one of the exchanges. 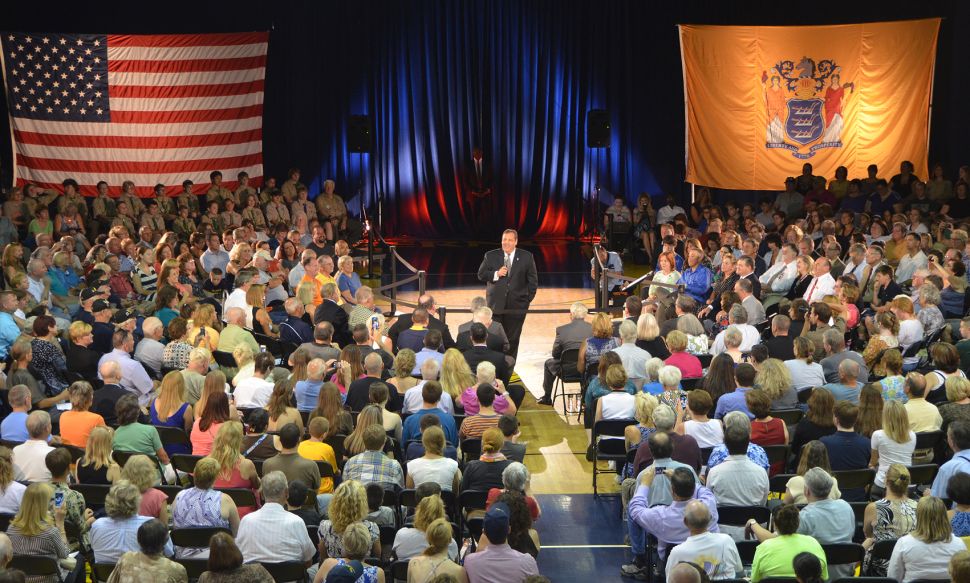