Accuser: This episode was titled “No Sun on the Horizon”: No kidding. Scandal has gone to a dark, dark place, from which it may never return. And not just because about half of the episode featured a clearly pregnant woman drinking copious amounts of alcohol (I’m sure it was actually grape juice; this isn’t Europe, after all). Jake, Olivia, Fitz, Cyrus, who all started out wanting to serve the country and make things better for the American people, now have to do really horrible, immoral things to keep the “republic” together. With Boy Scout Jake going over to the Anakin side as Command in this episode, the show has lost about its last nice, ethical character. Now Scandal is almost exclusively about watching terrible people do terrible things. What does this say about the greatest country in the world? Apologist, you have two minutes.

Apologist: Excuse me, but who wants TV shows about nice, ethical characters? If they do, they can cast my grandma, but I doubt anyone would watch. Scandal is great because it shows the bizarre and elaborate machinations behind the scenes of the republic! We get to see how the string-pullers pull strings! It’s magnificent! As Jake points out to Olivia this week, “Normal is also a bit boring.”

Accuser: And what is this “republic” they keep mentioning?

Apologist: Um, it’s our system of government? “A republic is a form of government in which power is held by the people and representatives they elect, and affairs of state are a ‘public matter,’ rather than privately accommodated.”

Accuser: Thanks for clearing that up; I can look things up on Wikipedia too, you know. But even in our republic, I’d doubt that our White House has ever held two murderers, with a third one running. I have never heard anyone pronounce “murderer” with 72 syllables the way Cyrus Beene did in this episode. And, I fail to see why Olivia Pope found it so funny when she realized that all three people running for president were killers.

Apologist: Yeah, you got me there. Must have been the pregnancy hormones or something. But what about Sally Langston? Wasn’t Kate Burton riveting as Sally spewed about cloven hoofs and Satanic influences as her guilt over the murder caused her to become completely unhinged? You know she’s Richard Burton’s daughter, and Elizabeth Taylor’s stepdaughter? That certainly helps explain why she’s so good with campy, high drama.

Accuser: Thanks for the random trivia. I’m sure Kate Burton’s illustrious family ties must have helped her as she was spitting out those porcine lines in the mock debate: “Time for the slaughter, you filthy cloven beast! I see the signs of the devil branded into your flesh . . . Yum, yum, crispy piggy, yum yum!” I really thought/hoped her assassination was going to be Scandal’s OMG moment that the promos kept touting. Why do they do that, by the way? It always results in an oversell. What if I don’t think Jake possibly killing James and/or David is the ultimate game-changing moment for Scandal?

Apologist: C’mon, it was pretty epic. Instead of dragging out yet another horrific truth that would drive a wedge between Olivia and Fitz (like Defiance), Olivia decides to come clean to Fitz with the truth about Daniel Douglas’s murder, knowing that it could lead to the downfall of not only Sally, but Cyrus and Mellie, who were also involved. (It also means that she chooses Fitz over Jake.) Cyrus contends that the revelation of Sally Langston as White House killer will lead to the end of the country, as it would result in the American people’s loss of faith in government as a whole.

So to save his administration, and the nation he professes to lead, Fitz throws the debate for Olivia, thereby proving to Sally that God still loved her, preventing her from confessing. This also stops Sally’s assassination by Tom, Jake’s inside-the-White-House operative; keeps her political life alive in the election; and gives her campaign manager Bergen a political woody, which even I didn’t really need to hear about. Meanwhile, Jake is realizing all the vile responsibilities that go along with Command, like setting up this prospective assassination, and then having to off the people who know the truth about Daniel Douglas’s death. He has to gun them down in an extremely cold-hearted fashion, and he has to do it himself, because this is who he is now. That’s why Jake discussing how he became B613 in the first place frames the episode: What makes a person into a professional assassin? (We previously got to see how that happened for Huck and Quinn, although Charlie was probably just created in a contract killer petri dish somewhere.)

But who did Jake kill? James or David? C’mon, I’m sitting on my whole seat, but I’m only using the edge!

Accuser: Apologist, clearly Scandal is your first experience with televised drama, because Cyrus’s last statement to James that he loves him more than anything else in the world is a final goodbye speech if ever we have heard one on this show, or anywhere else. Abby’s “I don’t want you to die” talk with David pales in comparison. Cyrus, whose only good part of himself loves James, will lose that part with James’s death, leading to his descent into total monsterdom. David, I dunno: becomes a B613 operative?

The best line in the entire episode improbably belongs to Fitz, after Olivia chastens him to “grow up,” post-debate-throwing: “You want me to grow up? I’m the only adult within ten miles of this place!” True, he’s the only one unshackled by this constant stream of machinations and falsehoods, as everyone else tries to protect him from this knowledge so that he can—oh, I don’t know—run the frickin’ country. But he and Olivia have now pledged to be honest with each other, which means she is showing him for the first time “how dirty and dark it is behind the curtain of power.” They don’t have Vermont or jam or anything normal; all they have is right now, and right now Scandal is a dark, sordid landscape. As Olivia ponders to Jake: “How did we get here? What is this place?”

Apologist: So, go ahead: Walk away from the dark sordidness of this show and “stand in the sun,” as Olivia pines, but then you’ll never see next week’s revelation of who Jake really shot.

Accuser: You’re right, I don’t want to miss that. Damn you, Scandal! I can’t escape, just like Jake and Olivia with their presidentially named hamburgers and Chinese food and dreams of running away to the good side. Olivia’s right, as she holds Fitz in kind of a romantic half-nelson toward the end of the episode: “There is no clean.”

Actually, I can easily point to this episode’s biggest flaw: only a few short, fleeting moments of Mellie.

Apologist: On that point, we completely agree. 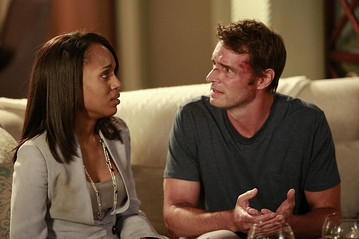