For all our lighthearted jabs at Scandal with employment guides and mock debates, there are still episodes, like this week’s “Kiss Kiss Bang Bang,” when the show pulls out all the stops and you remember why you watch in the first place. It’s not to make fun of it (well, not just to make fun of it). It’s because Scandal can still contain actual glimpses of glory, of grief, of bonafide, riveting melodrama.

The Scandal promos were wrong about this season’s OMG moment. It wasn’t during last week’s episode. It was during this one. Ladies and gentlemen, I submit: Cyrus Beene at the podium. Actually, Cyrus Beene actually crumpling, then keening at the podium. I’ve read about keening, but I don’t think I’ve ever actually witnessed it on television before. Well, Jeff Perry is a member of Chicago’s famed Steppenwolf theater company, after all.

Perry’s Cyrus steals scenes in whatever ridonculous storyline he’s thrust into, from Olivia and Fitz’s ill-fated romance to covering up murders with Mellie. He rises and falls and ebbs and flows and although he’s now monstrous with power, he remains an endearing monster. So the cute flashbacks of his courtship and James this episode were like punt-kicks to the heart. When we first saw Cyrus, he was a closeted law professor enlisting his student Olivia Pope to the Grant campaign. In these flashbacks, he’s divorced, with a truly unfortunate scruffy neck beard, getting hit on by a downright adorable black-leather-jacketed James. It’s nice to see James as a bold, up-and-coming reporter compared to the whiny fishwife he became in his marriage to Cyrus, selling his soul for a baby and a job as the White House Press Secretary.

Jeff Perry owned so many scenes tonight: when he tries to come out to President Grant while fighting with pronouns (“They make me happy”); when he walks into his office and seems stunned at the multitude of floral arrangements in there, until he devastatingly remembers why; the romcom-finale-worthy moment where he drags James to the dance floor at the Inaugural Ball, effectively outing himself, while a delighted Grant and bemused Mellie look on; and of course, the podium. The podium! What depths must Jeff Perry have latched onto and pulled up from his soul to emit grief-stricken, guttural noises like that? I imagine the shot of Grant gently consoling Cyrus and then steering him from the podium should clinch at least a few million votes for the incumbent.

Which he’ll need, now that Sally Langston has grabbed the gun lobby. There’s something really mercenary about Sally, who is to blame for this whole mess in the first place by killing her husband, taking advantage of President Grant’s mourning period to grab the gun-lobby vote. Cyrus, even in the depths of his own grief, comes up with the brilliantly strategic move of having Grant come out in favor of gun control, utilizing his own husband’s death to do so. Cyrus is such a political animal, he just can’t help himself.

It seems like no one, can, really: Jake, for example. Olivia of course immediately finds out the truth behind the murders and gets on board pretty quickly with what Jake really is as Command. It’s a testament to Scott Foley that he still seems insanely hot as he casually chats on the phone while digging a mass grave for his victims. But Foley and Dan Bucatinsky as James have their solid moment this episode as well: Jake explains to James that had he had to shoot him in a messy way to make it look like a carjacking, so it’s going to take a little longer and be painful, but he’s not going to let him die alone. Jake Ballard: dreamboat assassin.

Olivia turns to her dad for solace (honestly, who else does she have to turn to?). As we know, Joe Morton as Rowan Pope dearly loves nothing as much as a solid speech to chew on (I picture Shonda Rhimes at her typewriter, just hitting the return key: And another line! And another!). But when Daddy Pope explains how whoever is Command gets through the heinous things they have to do, he gives a simple reason: “There is in fact someone worth saving. Everyone. Everyone is worth saving. That is the point. At least I like to think that is the point of you.” The digging of mass graves and shots to the head are the pinpoint plot tweaks people like Command must do to protect the “republic,” aka the big picture. To keep the rest of the country safe overall. To shut up the truth about Daniel Douglas’s death, one person had to be corrupted (David) and three people had to die. On top of all of this, Liv then has to deal with her whiny remaining gladiators, with really only one with an actual issue, improbably Abby, worried about David. Harrison is keyed up about whatever in the hell it is that Adnan (and Olivia’s mom) are up to, while Huck is pretty much the only person in the universe who cares about Quinn’s various antics. Olivia then talks David into towing the line by blaming James’ death on random, fake carjacker Lance (who gets a free liver in the process, so, yay?).

I’m glad David is still alive, because Joshua Malina gets some of the episode’s only (and sorely needed) humorous moments, like when Jake tells him just to arrest the fake guy (“We’ve done everything but put James Novak’s car in Lance’s living room. Do I need to do that? Do I need to put James Novak’s car in Lance’s living room?”). Or when Olivia tries to get David to toe the line for now so that they can eventually take down B613: “So exposing Jake, that’s a death wish, but taking down the entire organization, that’s something within my reach?”). Liv points out that they have to lose this battle to win the war, but they appear to be losing so, so many battles;  when is the war lost too?

In the end, James dies, and an innocent man is sent to prison and Cyrus Beene’s heart is obliterated. Count me among the many who never thought an episode of Scandal could choke me up, but there was Cyrus Beene at the podium, and me scrounging around for the Kleenex box. And we know the worst is yet to happen: When Cyrus finds out that it was his kick in the rear to Command that set off this horrific chain of events in the first place. It’s a compelling move toward the other tangled maneuvers Scandal has no doubt cooked up for the rest of the season. 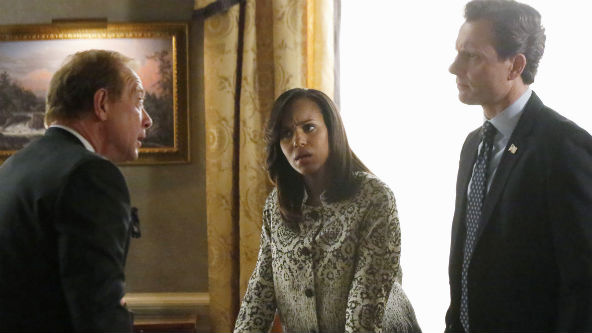