Season 6 of The Real Housewives of New York City is shaping up to be a bizarre, funhouse-mirror style rehash of the argument for second-wave feminism. They should teach this season in every Introduction to Women’s Studies in every undergraduate program on the planet.

Previously, Aviva and Carole fought after Aviva accused Carole of using a ghostwriter for her memoir about the death of her husband and close friends, an accusation that was made because Aviva was feeling a little insecure about how seriously Carole was taking her book, whose title is Leggy Blonde. I swear.

We pick up in media res, with Aviva accusing Carole of being “pompous, elitist, [AND] unsupportive,” and declaring that she would have supported Carole if she wanted to have a baby tomorrow, which is definitely not something anyone asked her to do.

“I feel really bad about being the catalyst for a big fight,” Ramona says, high-fiving a producer off-camera and unscrewing the cap on a fresh bottle of Ramona Pinot Grigio.

“You’re not a well wisher,” Aviva yells in the same tone that someone would use to call a person a sociopath or a murderer. Why does she need Carole to wish her well? They’ve moved to the landing at this point to keep fighting, and Sonja stares wistfully up the stairs, I suppose her because access to the second-floor bar has been temporarily barred. She suggests this fight might be happening because Carole is pre-menopausal OR post-menopausal, two equally plausible theories.

“There’s a million hands that go into a book,” Aviva says, again betraying her inability to distinguish between a literary work and whatever crowd-sourced, slapdash, duct-taped vanity project she’s planning on being on the cover of. Carole has not yet left the party, because she has work to do.

She politely taps Reid on the shoulder. “Your wife is not a nice person.” It’s incredible, but she’s not done.

“Harry, so nice to meet you, I totally understand your divorce!” She stops just short of sliding down the banister and defecating on the stoop on her way out, but just barely.

In the next scene, Ramona has invited Heather over to talk about how excited she is to go on vacation to Africa, because it is a place that is “so emotional and so spiritual, it just really touches your heart and soul,” and also millions upon millions of people live there. Leave it to Ramona to think that the continent of Africa exists solely for her own personal journey.

Heather is still appalled at Aviva’s accusation that Carole had a ghostwriter work on her book, while Ramona is still valiantly trying to pretend that she’s staying out of it, as if Ramona has ever been able to stay out of anything in her life. Meanwhile, just because I am 10000% on Carole’s side doesn’t mean I want to watch a single scene in which she is working on her book. She and her editor have an annoying conversation about a tiny change Carole doesn’t like. Her editor is like “This is not why I went into publishing.”

In the next scene, Sonja swans into her dining room holding Marley, who looks like he has no idea who, what, or where he is. Two of her interns are sitting at the table, working on laptops.

“Most of [my interns] come from wealthy families, because how else could they afford to work for me?” Sonja says. We get a glimpse of a day in the life of one of Sonja’s indentured servants. Here’s what’s on the agenda.

Sonja makes Uncommunicative Bro Intern Tyler confirm that no one is allowed to stay at the haunted mansion while she is traveling. What happens if they do?

“Drains get clogged, things get broken, dog drowns in the pond…” Tyler answers in the dulcet tones of someone who has both seen too much and figured out where Sonja stores her prescription medication.

Aviva shoots the cover photo for her book on a patch of grass in Central Park, giving her the opportunity to say, “It takes a village to write a book” for the hundred thousandth time. Kristen shows up and tells Aviva she thinks the fight with Carole is rooted in Carole’s jealousy of Aviva, which makes Aviva smile like she’s the daughter of the Sphinx, the Mona Lisa, and Mitch McConnell.

“Aviva and I have children, have husbands, and Carole doesn’t have that,” Kristen says. “[Writing] is her everything.”

I spend the next commercial break clawing at my face, because how is it possible in 2014 for someone to think that a fight about smearing someone’s professional reputation is ACTUALLY about how sad they are because they don’t have a man?

Avery gets ready for prom with a group of her friends, while Ramona sips white wine and hopes Avery doesn’t get as drunk after prom as she already is at that moment. Everyone’s hair is spiral curled, and vocal fry and age-inappropriate smoky eyes abound. The girls get ready to leave and Ramona cries. It’s pretty cute.

At Carole’s apartment her super hot “VP of Social Media” is helping her open a bottle of wine. She’s throwing a baby shower for a friend who decided to have a baby on her own.

“Who needs a sperm donor? There’s plenty of sperm out there.” — Sonja

While Sonja and Kristen bond at the party over their mutual belief that “everything happens for a reason” (what an original thought!), Carole pulls Ramona aside to tell her she didn’t appreciate Ramona inserting herself into the fight at Aviva’s house.

“She’s alone, she doesn’t have a significant other in her life, she has no children…and for her, her work is everything,” Ramona concludes. Hey, just a thought – that might not be a reason to pity Carole whatsoever.

In the final act of this jam-packed episode, Kristen and her husband Josh, and Heather and her husband Jonathan, have signed up to run a Spartan Race, one of those mud-drenched obstacle course events for grown-ups that have become so popular of late. On race day, while Heather crawls around doing something that makes her look like she’s in a three-legged race with herself as a warm up, Kristen tells us that she is very nervous. She thought she had already done everything scary on her list, which consisted exclusively of the following:

Josh tells her not to be “a pussy.” Supportive! Tell me again how life is only worth living if you have a husband. During the race, Jonathan is under the impression that coming in first place actually matters, while Heather is not far behind. Kristen gets a cramp and wants to quit almost immediately, while Josh is too busy living out the live action version of his Walking Dead fan fiction to care if she lives or dies.

Kristen finishes way behind the other three, furious, though they’re all hanging out at the end of the course yelling encouragement to her. She tells her husband she’s not speaking to him. He tells her to “man up.” Tell me again how life is only worth living if you have a husband.

Next week: it’s the return of Luann. I have chills! 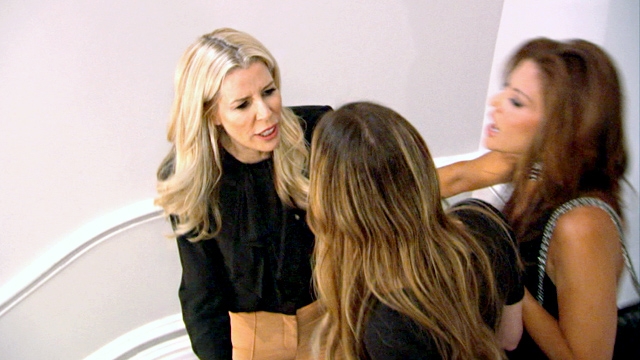