Wellllll, that was a little bit of a hot mess, wasn’t it? “Mama Said Knock You Out” (props to ABC for its second LL Cool J reference this week, after Nolan Ross’s “Don’t call it a comeback; I’ve been here for years” quote in Sunday’s Revenge) contained nearly all of the aspects that make Scandal viewers want to tear their collective hair out, with not enough of the actual over-the-top drama that makes it compelling.

Pretty sly of you, Scandal, to follow up last week’s truly stellar episode with this one. The appearance of the long-awaited Grant kids (the casting department did a great job of finding two teens that look like they could actually be the offspring of Mellie and Fitz, or Mellie and Jerry Sr., as the case may be) was obviously going to bring up a ton of family squabbles. But this week, instead of careful crafting the familial drama possibilities, Scandal pretty much blew everything up and threw it at the walls to see what would stick. Mellie and Andrew only able to enjoy about one week of sexual secrecy! Young Jerry’s anti-Fitz Twitter account! More whining from various Commands about how hard it is to be Command! Harrison getting poisoned! And oh God, Huck and Quinn!

There’s so much wrong here, and so little right, that we need to organize our grievances (which are legion), into the three most egregious categories:

The Minimization of Olivia Pope: We watch Scandal for the powerhouse that is Kerry Washington as Olivia Pope. As she gets sucked into the Fitzgerald world again, we see that formerly awesome power slowly eroding each week. In this ep, Olivia is reduced to little more than the hired help, as her mother Marie points out: “Cleaning up those people’s messes . . . thinking that you’re family, but you’re nothing but the help.”

After getting screamed at by both members of the First Couple in short succession (Mellie: “What are we paying you for?” Fitz: “I’m talking to my wife!”), reality finally dawns on Liv that she is basically just a maid with a bucket. Cyrus helpfully points out that her cleanups involve not just “putting the family back together, but the whole damn country,” but the help is the help. And we (and she) want Olivia to be more than that.

Quinn and Huck: Our own President Fitzgerald Grant, Tony Goldwyn, directed this episode. He has some nice effects here, like in the almost dreamlike Adnan interrogation scene, or the frantic immediacy of the moment when Cyrus attacks Jake Ballard with a vase, as he finally realizes that his prompting of Jake, telling him that his Command predecessor would have taken care of the whole Publius situation already, led to James’ death. But it was nice to see the Fitz loyalty as he tells the Secret Service to leave Cyrus alone.

Jake has kind of an unnerving smirk on his face during this attack, which I guess goes along with his new bad-ass Command persona, telling the president that he’s not his bitch, that he’s the one who decides if America sleeps at night, and again trash-talking with his predecessor, Rowan Pope, as he realizes that Olivia is starting to investigate B613. As even Huck points out, this development can’t end well for anyone.

So since B613 is still around, it’s back to the brutality this week. Well, it’s been a while, but did anybody miss how gleeful Quinn gets with a drill in her hand? Thought not. She and a blood-splattered Charlie host a lovely relationship talk over the duct-taped body of Dmitri Balenko, but what’s even more disgusting than that? That’s right: Huck and Quinn.

Goldwyn tries to get artistic in his direction of Quinn and Huck’s meeting, placing the characters on a bridge, facing different directions. O.K., fine. I get that they have things they need to clear up, namely what it means to be a gladiator, who’s still a gladiator, if Quinn can ever again be a gladiator, etc. But barring that conversation, I really don’t need to see Quinn and Huck licking each other or talking about tongues in mouths ever again. Charlie is so concerned about Quinn’s supposed draw toward Huck that he moves right into her apartment, setting up the most heinous romantic triangle in the history of soap opera. Ah, young assassins in love!

Mellie Keeping Silent: So many comparisons and platitudes get thrown around this week, about green grasses, double standards, the fact that nobody is perfect (and cheers to Andrew for combating Olivia when she tell shim to stay away from Mellie because this White House can’t afford another sex scandal: “Glass houses, Olivia”). But the worstScandal moment in a week filled with many low moments (“Mom! You were on your knees with Uncle Andrew!”), is hypocritical Fitz going off on Mellie, blaming her for the disintegration of their marriage. The real fault of course, lies with his father Jerry, who raped Mellie, thereby leaving her unable to have sex with her husband and also unable to tell him why.

But now, years later, why wouldn’t she tell him? Fitz’s father is dead, and without the circumstances of her rape, she is getting blamed for all sorts of things from the stone-throwing president, who maintains that he never would have strayed if he and his wife had not been celibate for several years. “You killed us. I would never have cheated,” he maintains, but he thought he was stuck with a wife who was “dried up” (ew). From Fitz’s perspective, all Mellie has done is “deny me love and scheme to have power.” Is it the devastating possibility of young Jerry’s true parentage that keeps her silent.

For all the screaming of “Tell him!” at the screen that scene brought out, it did show that Fitz actually has much more spark with Mellie, as he addresses their years of lovelessness, than with Olivia. Mellie’s rape by her father-in-law was an absolute game-changer, turning a beauty-queen villain into a sympathetic character in one moment. Those shots of early, in-love Mellie and Fitz in this season’s earlier episode “Everything’s Coming Up Mellie” haunt everything that comes after them. Getting these two back together is something I can get behind.

Olivia’s realizations after the Fitz and Mellie fight lead her to give Fitz not a kiss goodbye, which would actually make sense in a subtle way, but yet another speech. If they had an actual soapbox on this show, nearly all the cast members would be fighting each other to get to stand on it next. Olivia grandstands about the importance of her job in another one of her diatribes, and even Fitz looks bored. So, they’re off again. I guess.

Because, as Olivia’s father points out: Families stick together. Olivia pulls the Grants together in time for their very important interview with very important journalist Mackenzie Astin, even handing the Grant baby over to Mellie (my hand to God, I absolutely forgot that they had a third kid, it’s been so long that there has been any mention of him). They are family and she is not, so she stands on the sidelines, bucket at the ready.

Come on, Scandal. We know you’re better than this. 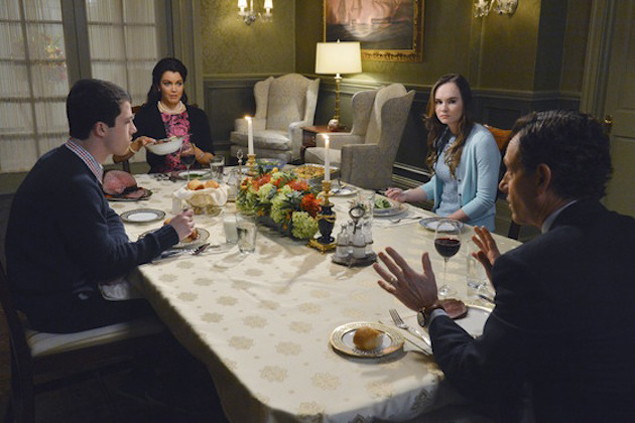