In the opening shot of Errol Morris’ The Unknown Known, Donald Rumsfeld doesn’t look well. His face has the clammy plastic sheen morticians are paid to produce. We  soon come to understand that he is alive and well, but this gray mausoleum of a documentary is about death anyway.

The title refers to the most famous of Mr. Rumsfeld’s contributions to the dictionary of American Orwellianisms. During a February 2002 briefing at the Department of Defense, then Secretary of Defense Rumsfeld addressed the problem of the lack of evidence of Iraqi W.M.D.s.

Reporters in the room didn’t have time to cogitate on that before Mr. Rumsfeld’s curt, grinning retort from the podium: “Last question.”

The unknown known is the logical fourth part of that famous quote. On one level, the title refers to the gibberish Mr. Rumsfeld spewed throughout his career but especially in the public relations lead-up to Operation Iraqi Freedom.

It could also be said that Mr. Rumsfeld himself is the unknown known. We come to understand that we know him without knowing him at all.

A month after explaining the knowns and unknowns, Mr. Rumsfeld pushed the “go” button on a deeply controversial war that many allies didn’t want and that tens of millions of people were protesting in cities across America and the world. It was a moment for which he had been waiting and training his entire public career.

A dozen years later, the known knowns are these: Roughly 460,000 dead Iraqis, 4,400 dead and 32,000 maimed American troops and 104,000 Americans with PTSD. A Harvard study predicts the Iraq and Afghanistan wars will cost America $4 trillion to 6 trillion when all is said and done.

There doesn’t seem to be a number on Iraqis with PTSD, but one presumes it’s a large percentage of the population. The bombs are still ripping through markets and streets every day, and the carnage is common as the weather report.

Multiply the maimed and the PTSD sufferers by the wives with broken, addicted husbands, children in wrecked families, the friends, colleagues and communities struggling with the collateral human mess, all in a broke nation that blew hundreds of billions on Mr. Rumsfeld’s war, and you get your answer.

This film is not as satisfying as Mr. Morris’ The Fog of War, about Mr. Rumsfeld’s Vietnam era counterpart, Robert McNamara, because Mr. McNamara was repentant. Mr. Rumsfeld is cocky. He told Mr. Morris he “hated” The Fog of War, because Mr. McNamara had “nothing to apologize for” but agreed to participate anyway, eager to prove that he too has nothing to apologize for.

During his long career in public service, beginning in Congress and through the Nixon, Ford and Reagan administrations, Mr. Rumsfeld was famous for his memos. He produced them prodigiously in an entertainingly obscurantist government-speak style that led some to call him a “metaphysician.” He liked to play with words, to consult and quote from the dictionary, to argue about meanings. He wrote a Pentagon dictionary and, as Mr. Morris has said, loved to quibble with the press about the meanings of words like insurgency and quagmire.

He wrote so many memos, blizzards of them in fact, that he jokingly started calling them snowflakes. The film uses a snow globe as the leitmotif. The snowflake imagery reinforces the film’s cold, funereal tone.

Mr. Rumsfeld makes George Orwell look like a piker. “If you want peace, prepare for war,” he used to say during the Cold War, ratcheting up fear of the Soviet Union in its dying days so that the military contracts grew by billions. Then, as in 2002, he presented the lack of proof of new weaponry as proof.

Before I saw the film, I didn’t know Mr. Rumsfeld had in his portfolio a sort of drive-by insurance adjuster’s expertise in the Middle East. Ronald Reagan sent him on a tour of the region after the Marine barracks bombing. He shook hands with Saddam Hussein and the sheiks, got chummy with Tariq Aziz and sent back snowflakes about how the whole area was “a swamp” that America would do well to avoid.

Two decades later, he swaggered into the swamp with the most fearsome military machine known to mankind, on a pretext that has been proven to be utterly false.

Mr. Rumsfeld is a man who, as Mr. Morris said in a recent interview, operates by contradiction. He may be in denial about the Iraq War, but he is way too clever to actually deny much. He slithers, twists, pivots and turns, and unless you are very very very alert, you forget the original question, and his answer doesn’t matter anymore.

He is Boy Scout, middle America average. He married young, and pictures of him with his child-wife are astonishing—they are so young. By the 1970s he was in DC and well on his way to becoming what he would become, a black belt bureaucrat and office politician.

Then there he is, the boyish right-winger with the aviator glasses and the dark brush cut, grinning like a movie star at Cabinet meetings. He chortles about outmaneuvering rival George H. W. Bush in the 1970s, shunting him off to the C.I.A. at one of its lowest moments after the Church Committee, so he and his protégé, Dick Cheney, could steer the Ford White House.

Mr. Morris makes him read some of his memos into the camera, and he complies, sometimes proudly, sometimes sheepishly. There are a few words and phrases he simply won’t take credit for. He blames “shock and awe” on a general. He admits to approving “enhanced interrogation” techniques at Gitmo but insists that policy had nothing to do with Abu Ghraib. When told that investigators have concluded that the Gitmo policy migrated and morphed into Abu Ghraib, he replies, “I agree with that.”

He jokes, he feints, he dodges, beaming and proud to be near 80 and still able to fly like a butterfly and sting like a bee with the bullshit.

He chokes up just once, talking about a woman he met at Walter Reed who insisted her dying son was going to live, even though the surgeons said it was unlikely. Two weeks later, Mr. Rumsfeld returned to the hospital and learned the kid was alive and going to make it. “That woman’s belief …” he says, tearing up slightly.

That’s it. He gets emotional about the lone, lucky survivor but not about the dead. And why would he cry? He did exactly what he wanted to do and thought it was right, and he will never have to pay for it going horribly wrong.

“Time will tell,” he tells Mr. Morris, of the legacy of the Iraq War.

Of course, it looks like a terrible folly right now, and other people will be paying the price for years to come. Our soldiers, weapons, blood and treasure dismantled Iraq and handed it over to the Islamists. Fallujah, where so many died, is an Al Qaeda outpost now. Iraqis are dying every day. Last year was the deadliest since 2008, with more than 8,000 killed.

“You, I and anyone who walks in the streets, at any moment, may face a car bomb, motorcycle bomb or explosive belt. At any moment, anyone may be killed,” a Baghdad resident told a reporter recently.

The final shot in this quiet film is reminiscent of the last scene in Indiana Jones and the Raiders of the Lost Ark where the ark—the greatest weapon of all—is shelved in a nondescript government warehouse, beside other terrible secret weapons.

Here, the camera closes in on file boxes, presumably of Mr. Rumsfeld’s memos, being ferried on library carts shelves in a massive archive. Pulling back, the camera pans thousands of identical beige boxes, aisles of shelves that require ladders to scale, as far as the eye can see.

Like a Brothers Grimm fairy tale, the classified snowflakes fell and fell and fell, and great drifts softly covered the graves. 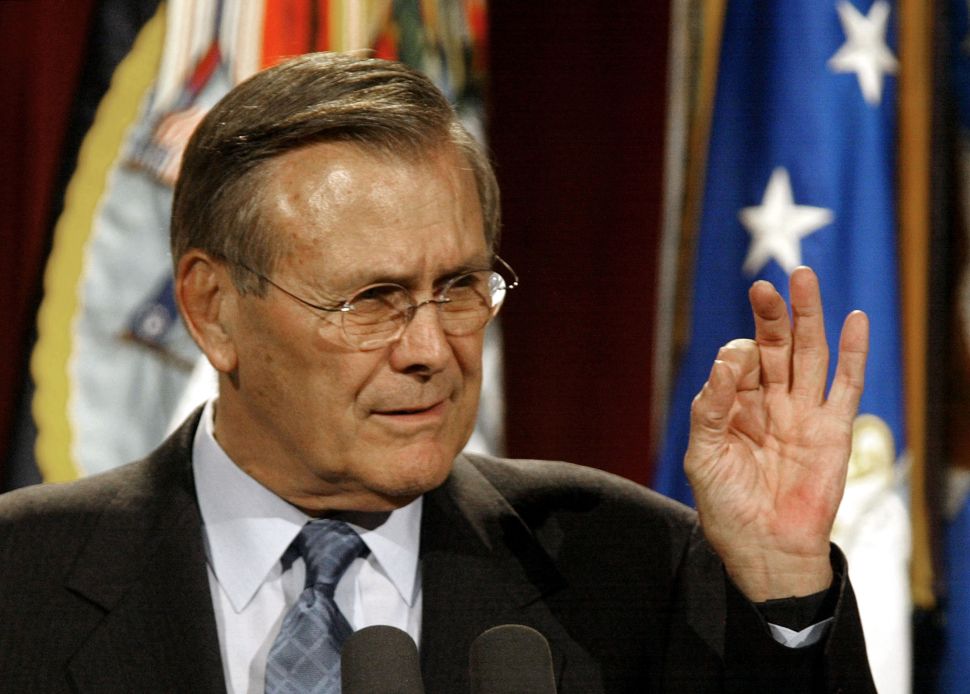