WEtv has ordered a pilot of Channel 4’s reality show Sex Box, where a couple goes into a large box in front of a studio audience, has sex, and then talks about it.

As Jezebel notes, none of the sex is actually visible: The cube where the lovemaking occurs isn’t see-through, meaning we just have to take the couple’s word for it. Unless the producers verify it somehow? I don’t know, this seems like a particularly boring Black Mirror episode, like “Look how far society has fallen,” kind of dystopia thing. On the other hand, from the clip we’ve seen above, it’s also very queer-focused, which could be a good thing. I’m not ready to denounce it as the end of civilization just yet, especially if it’s not even that titillating, more of a soapbox (or sex box?) on which people can champion their alternative lifestyles.

On the other other hand, this might be a not so great way to get a dialogue started about sex, because there’s still that element of using the act as some sort of voyeuristic entertainment. It’s not so much letting us into someone’s bedroom as having us gawk at the kind of people who would have (alleged) sex in public. That’s not normalizing culturally taboo topics, it’s making them seem more transgressive.

So in conclusion: “Sex Box! The show that will launch ALL the Think Pieces in 2014.” Can’t wait! 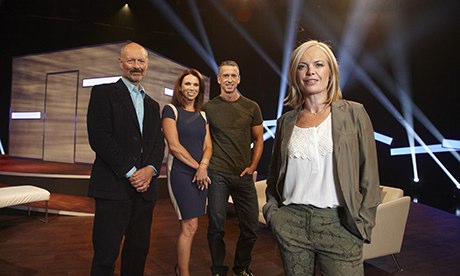