Comedian and former taxi driver Jimmy Failla posted a video on YouTube entitled “Snakes in a Cab,” in which he surprised riders with a yellow python in the backseat of “his” taxi. The shocked fares went on expletive-laden rants in which they showed their terror. The stunt was to promote his book Follow That Car.

Mr. Failla claimed that he had a snake handler in the front seat, and that each of the customers signed a release once they regained their composure. He has not driven a cab for work since 2010, but still has his license. The cab in the video was rented from a medallion owner.

The Taxi and Limousine Commission blasted Mr. Failla’s behavior. “This was a monumentally poor judgment on the driver’s part, and we are clearly going to actively question this person’s suitability to continue holding a TLC license,” spokesperson Allan Fromberg told the New York Post.

PETA also took Mr. Failla to task. “Being bombarded by shrieking passengers, slamming car doors and threats of violence is extremely stressful for them,” senior director of communications Collen O’Brien told the Post. Mr. O’Brien also suggested that Mr. Failla could have used a rubber snake.

Judging by the way New Yorkers react to wildlife of any kind, the fake animal probably would not have worked out much better. 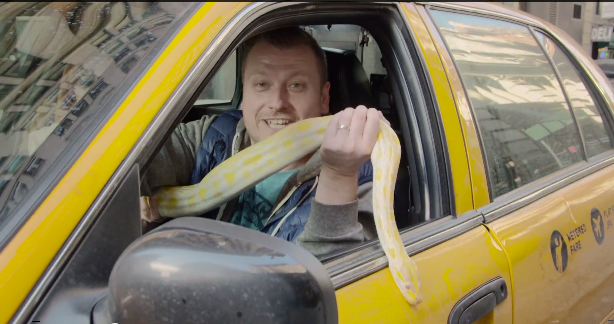