Mercer (39% of the district’s registered Democratic voters) will decide where it puts its support later this evening.

In his home county tonight, Chivukula won unanimous support, waving with the Rocky theme playing in the background moments after the giant hovering face of Holt himself appeared onscreen, apologizing for his absence owing to D.C. duties and vowing to help voters choose his successor.

Chivukula spoke to the aspirations of a long-suffering Somerset, where Democrats continually find themselves on the sacrificial ramparts in countywide forays.

Past casualties could be glimpsed scattered among the occupied chairs.

“We are going to win respect,” said the assemblyman, whose accolades today for a county that only has 11% of the district’s primary vote, however, could turn sour next year, according to one well-placed source on the other side of the county line.

The favorite son of Somerset received a standing ovation from this crowd, county diehards apparently oblivious to the fingernails-on-the-chalkboard response that Democratic allies of Greenstein over in Middlesex now experience at the sound of two words: “Upendra Chivukula.”

An insider, speaking on condition last week in a Central Jersey diner, was asked to consider Chivukula’s chances in the Democratic Primary.

Because the Franklin Township lawmaker presents a human rumble strip to what Greenstein allies had hoped would be a cruise control candidacy and improves Watson Coleman’s chances, Chivukula should expect to find himself jettisoned from the goodwill of the Middlesex Democratic Committee the next time he seeks support for his assembly seat, the source grunted.

“I’d do it again,” Corradino said.

He and the county chair here, Somerset Democratic leader Peg Schaffer, clashed over that endorsement but have since reconciled.

“Peg does a great job,” said the veteran mayor, staring out at the crowded tables adorned with red, white and blue balloons as last year’s candidate for LG, labor leader Milly Silva, stirred the corwd.

“The day after we lost I was not tired and I was not down,” Silva said, citing her commitment in particular to fair and equal wages for minority women. “The issues we campaigned on did not go away.” 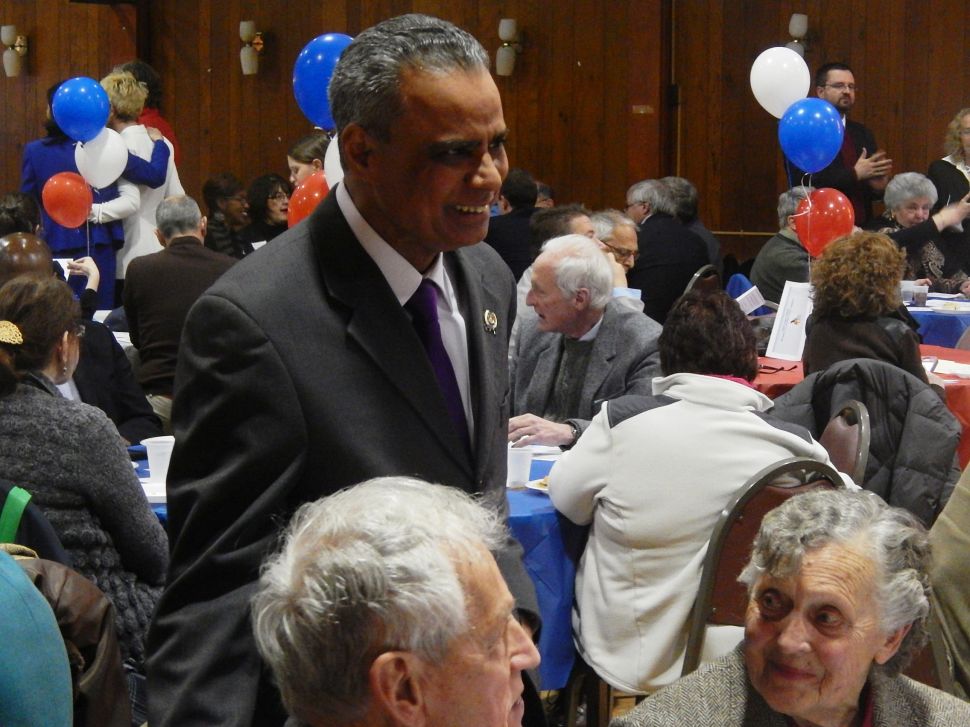