Metropolitan Opera
La Bohème
March 19–April 18
The quarreling lovers in Puccini’s La Bohème agree to stay together “until the season of flowers,” which, allowing for global warming, makes March 19 as good a date as any for the return of the Met’s most-performed opera. This time around, the towering Paris cityscapes of the vintage Franco Zeffirelli production frame the debut of Romanian soprano Anita Hartig, who’s made the role of Mimi a calling card from Milan to London. Joining her is tenor heartthrob Vittorio Grigolo as the jealous poet Rodolfo, and another debuting soprano, American Jennifer Rowley, as the dizzy playgirl Musetta. Veteran diva Barbara Frittoli alternates as Mimi.

Metropolitan Opera
La Sonnambula
March 14–April 1
The gentle comedy-drama La Sonnambula begins a short return to the Met. The filigreed vocal melodies of Bellini’s bel canto style are the raison d’être of this sentimental tale of a village girl accused of promiscuity when she is discovered in bed next to a nobleman. Happily, it turns out she was only sleepwalking. The unlikely plot perhaps inspired Mary Zimmerman to rethink the piece as a Noises Off–style farce set in a rehearsal room, an innovation that garnered the Tony Award–winning director a garland of boos when the show opened in 2009. Even if this season’s audiences react with similar hostility to the staging, they can’t complain about the cast the Met is offering: soprano Diana Damrau in her first outing as the dreamy heroine, stylishly flanked by tenor Javier Camarena and bass Michele Pertusi.

Lincoln Center
Platée
April 2
A highlight of every opera aficionado’s season in New York is the appearance of conductor William Christie’s baroque troupe Les Arts Florissants, delighting as much in their choice of offbeat repertoire as in their exquisite performance style. They’re at Lincoln Center for one night only, performing Rameau’s outlandish comedy Platée in concert. The dizzy, tuneful work, originally written for the wedding of Louis XV’s son, centers on a series of farcical encounters between vain water nymph Platée—sung by tenor Marcel Beekman—and a gaggle of mythological gods. Likely to steal the show, however, is the coloratura soprano Simone Kermes, the Lady Gaga of classical music, who’s typecast as “La Folie”—Craziness.

Metropolitan Opera
Madama Butterfly
April 4–May 9
Back at the Met, another classic Puccini production returns, Anthony Minghella’s elegantly spare staging of Madama Butterfly. From sliding paper screens, a lacquered wood floor and sumptuously draped kimonos, Mr. Minghella evokes a dreamlike vision of Japan for this tearjerker about a geisha betrayed by her American husband. Latvian soprano Kristine Opolais, who made a sensational company debut last season in La Rondine, appears as the heroine Cio-Cio-San, supported by tenor James Valenti and baritone Dwayne Croft. Met mainstay Marco Armiliato, who rescued last fall’s revival of this opera by jetting in from Chicago to conduct the opening night, leads the Met orchestra; he’ll be replaced later in the run by the company’s principal guest conductor, Fabio Luisi.

Iestyn Davies and Thomas Dunford
Weill Recital Hall
April 10
A standout star in Met productions of modern pieces like Britten’s A Midsummer Night’s Dream and Adès’ The Tempest, British countertenor Iestyn Davies will mix new and old at this recital. Joined by Thomas Dunford on the lute, Mr. Davies promises Jacobean songs by Robert Johnson and John Danyel as well as the more familiar John Dowland. The centerpiece of the concert, though, is the New York premiere of Nico Muhly’s “Old Bones,” a lyrical contemplation on the rediscovery of the remains of Richard III under a parking lot in 2012. Mr. Davies’ subtle art will be heard to advantage in the intimate Weill Recital Hall, where competition for the fewer than 300 seats is likely to be fierce.

Metropolitan Opera
La Cenerentola
April 17–May 10
La Cenerentola brings even more bel canto sparkles to the Met. Though this production of Rossini’s version of the Cinderella story is a revival, it boasts a world-class cast headed by American mezzo-soprano Joyce DiDonato in the title role, with superstar tenor Juan Diego Flórez as handsome prince Don Ramiro. In this sophisticated, magic-free take on the fairy tale, the mysterious princess sheds not a glass slipper but a diamond bracelet, and the fairy godmother role is taken by a dapper tutor to the prince named Alidoro, sung here by velvet-voiced baritone Luca Pisaroni.

Metropolitan Opera
I Puritani
April 17–May 10
The Met winds up a de facto bel canto festival with Bellini’s ultraromantic I Puritani. The venerable sets of the Met’s production by legendary designer Ming Cho Lee have previously served as backdrop to the singing of such divas as Joan Sutherland, Edita Gruberova and Anna Netrebko. Now a new soprano, Olga Peretyatko, takes on the role of the giddy heroine Elvira in a highly anticipated debut. Lavish casting continues with American tenor Lawrence Brownlee in the stratospheric role of Elvira’s star-crossed lover Arturo and baritone Mariusz Kwiecien, who opened the season as Eugene Onegin, as the spurned Riccardo. Conducting is the young Italian Michele Mariotti.

Metropolitan Opera
Così fan tutte
April 23–May 8
Returning from the Met’s fall season is Mozart’s Così fan tutte, with the company’s music director, James Levine, leading a lively young cast. The bubbling comedy served as the vehicle for the maestro’s return to the theater last fall after two seasons on the sick list, and it remains a showcase of his virtuoso conducting style. Also returning from the fall is tenor Matthew Polenzani, who transforms the long and tricky role of Ferrando into a star turn of assured, brilliant singing.

Gotham Chamber Opera at the Gerald W. Lynch Theater at John Jay College
The Raven
May 28–31
This always innovative company unveils a United States premiere of Toshio Hosokawa’s The Raven, a monodrama for mezzo-soprano and chamber orchestra. It’s based on the narrative poem by Edgar Allan Poe, about a grief-stricken man haunted by a raven. Gotham is presenting this work as part of the New York Philharmonic’s inaugural NY PHIL BIENNIAL festival. Directed and choreographed by Luca Veggetti, the opera will star mezzo-soprano Fredrika Brillembourg and dancer Alessandra Ferri, former prima ballerina assoluta with the Royal Ballet, American Ballet Theatre and La Scala Theatre Ballet.

Grace Rainey Rogers Auditorium at The Metropolitan Museum of Art
Gloria—A Pig Tale
May 29–June 1
The NY PHIL BIENNIAL continues with H. K. Gruber’s music theater work Gloria—A Pig Tale, presented as a co-production of the New York Philharmonic, the Metropolitan Museum of Art and the Juilliard School. The fanciful tale of Gloria, who has naturally curly golden hair and knows she is the most beautiful pig in the mountains, reunites the Philharmonic’s music director, Alan Gilbert, with director Doug Fitch, his collaborator on the hit 2010 production of Ligeti’s Le Grand Macabre. 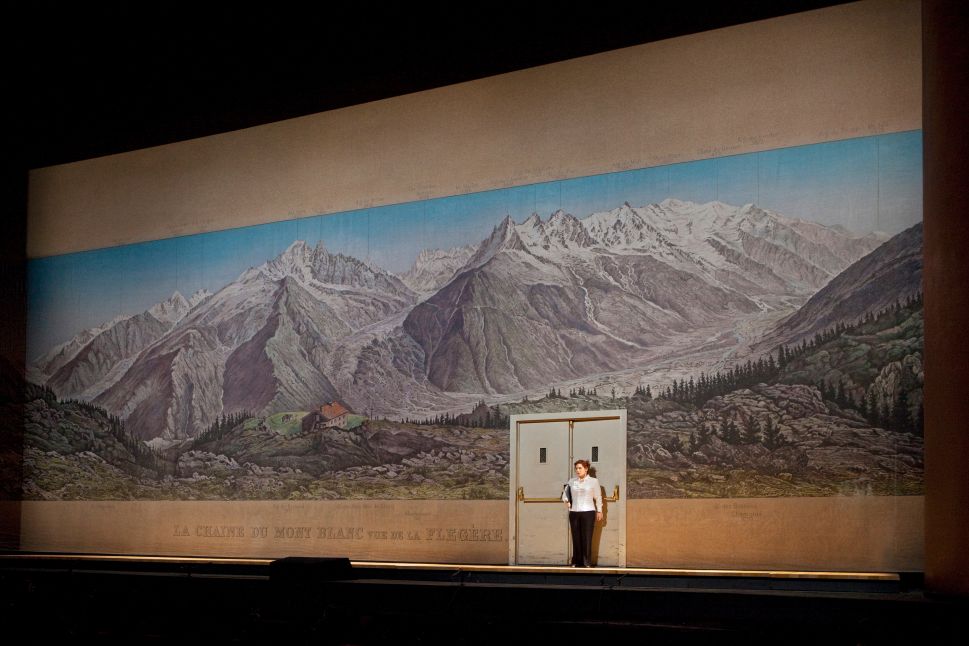