Steven Seagal, actor/producer/screenwriter/martial arts expert (but not law enforcement officer?) went on Russia Today to discuss the events in the Ooh-crain (sic). It’s about as glorious as you’d expect.

“On supposedly quote unquote respectable news channels, they keep saying ‘just like when Russia attacked Georgia…’ Really? How about telling the truth? Didn’t Georgia attack Russia, and didn’t Russia retaliate? Maybe people should either do their homework, or, you know, just stop saying what they’re told to say.”

He also says that we should do what’s best for Russia and the Ooh-crain (sic), but not what’s best for Europe. Also, that this international debacle is “a dangerous game to play,” which is, coincidentally, the tagline of his next film.

As Glenn Greenwald would point out, Mr. Seagal is hardly going on an unbiased channel: Russia Today is basically a propaganda machine. 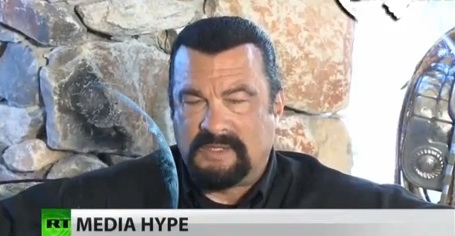