We New Yorkers are notoriously proud of our city. We declare New York City “the most” of everything, good or bad: the most diverse, the most important, even the most dirty (actually, that last one raised some ire from defiant city officials).

So it was a bit of a wake up call to find out that not only is New York not the world’s most expensive city; it doesn’t even break the top 10. According to the Economist Intelligence Unit’s biannual Worldwide Cost of Living Survey, released yesterday, Singapore claims that undesirable honor.

The EIU survey, which uses New York as a base (because we’re most important), cited a 40 percent currency appreciation and price inflation, as well as a lack of natural resources, as the main reasons for Singapore’s slow rise from 18th most expensive city a decade ago.

“The city also has some structurally expensive items that skew the overall cost of living upwards,” the report stated. “For example, car costs have very high related certificate of entitlement fees attached to them, which makes Singapore significantly more expensive than any other location when it comes to running a car. As a result, transport costs in Singapore are almost three times higher than in New York.”

So that $980 cab ride from New York to Massachusetts would cost nearly $2900 in Singapore? We’ll pass. And if you thought shopping on Madison Avenue was expensive, think again. Singapore is also the most expensive place in the world to purchase clothing, because the city-state’s “wealthy and fashion conscious consumer base” has encouraged the proliferation of “high-end malls and boutiques.”

European cities also made a strong showing in the list of places more expensive but less cool than New York. Paris, Oslo and Zurich all made the top five, after a brief drop following the 2008 global economic crisis.

According to the report, European markets, unlike Asian ones, “tend not to have specific items or categories that push the cost of living up, but are more expensive for a broad array of items, which aggregates into a higher overall cost of living. For example, Paris… does not have any expenditure categories where the cost of living is disproportionately high, but is costlier than most locations for seven out of the ten categories included in the worldwide cost of living survey.”

But before you buy a $10 beer to celebrate New York’s newfound identity as a bargain-hunter’s dream, consider this: New York is ranks 26th on the list of most expensive cities. 26th place? We’re not even most expensive in the Americas; Caracas claims that title. And Mumbai is cheapest. We’re supposed to be first at everything. Our women pay $73 per haircut, for God’s sake.

Don’t worry too much, though; Forbes recently declared New York the most overpriced city in the US. We’re tied with Honolulu, a city that has to ship all its imports and exports over 2,500 miles of water. Great. 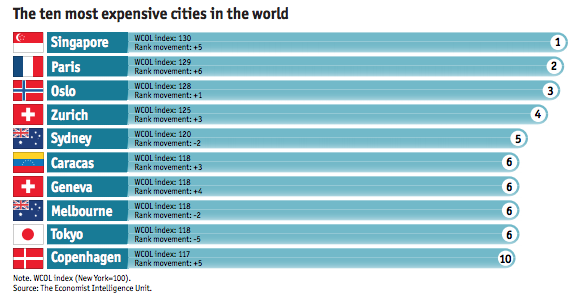