TRENTON –Gov. Chris Christie wanted to run for president, so he yanked New Jersey out of the Regional Greenhouse Gas Initiative (RGGI) to play up his street cred with pro-business conservatives in red-hued America.

Now Senate President Steve Sweeney (D-3) (pictured) wants to run for governor, and on the way needs to shore the statewide affections of blue-tinged enviros outraged by Christie’s 2011 executive declaration.

That’s the short and simplified political version of why the Senate Environment Committee this morning released Sweeney’s bill requiring the state’s participation in RGGI.

Broadsided as a climate change combat bill, Sweeney’s S151 emerges on the heels of an appellate court decision earlier this week ruling that Christie’s order violated the law.

The bill clarifies the intent of rechanneling the state back to the implementing law, which implements the policies of the Global Warming Response Act (GWRA) by “creating an emissions auction and trading mechanism to reduce the level of greenhouse gas (GHG) emissions, namely carbon dioxide (CO2),” according to summary language in the bill.

“The governor was wrong,” said Dave Pringle of the New Jersey environmental Federation. 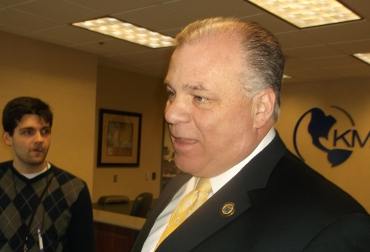