This morning, The Awl announced that Matt Buchanan and John Herrman will take over running the site, which will, after five years in “public beta,” finally get a redesign.

The Awl, nothing if not consistent in its conversational/clever, take-it-or-leave-it tone, wrote the announcement in a FAQ format under the overline “Website Discusses Itself.”

Back in June, the site announced that it was soliciting applications for an editor in chief with “the attention to detail of a great managing editor, the confidence of an editor-in-chief and the moral compass of a columnist” who fit in with the “extremely strict no-assholes policy.” Well, two is better than one, we guess. After all, it worked for co-founders Choire Sicha and Alex Balk, who have run the show since the site launched in 2009 (and have since added enough other sites to form a media network).

“The Awl will be run by John Herrman, currently of BuzzFeeᴅ, and Matt Buchanan, currently of theNew Yorker. We’ll introduce them in more detail down the road, but they’re really lovely, thoughtful, curious and smart—and also they’re total weirdos,” The Awl wrote of the new hires, who worked together at FWD, BuzzFeed’s tech vertical, until Mr. Buchanan left a little over a year ago for The New Yorker’s website.

“Here’s a funny coincidence: The candidates we’ve been absolutely the most interested in have all asked us: ‘Why do you want *me* for this job?’ The people who think they’re most qualified pretty much aren’t; the people who think they’re not ready for the job are just right,” Mr. Sicha recently told Capital, before using a shrugging emoticon (one of these guys:  ¯\_(ツ)_/¯) to hint that the search for a new editor in chief was nearing an end.

The site itself, which has had a decidedly bare-bones appearance since it launched, will get a redesign. According to The Awl, it’ll be a good thing. “There might be a bit of radical change even, but we won’t make it suddenly all like ‘Wait, where am I?’ It’ll be more like, ‘Huh, why don’t my eyes hate me and themselves anymore?'”

“Change is always scary but that never keeps it from happening anyway. Here’s the thing: It’s an adventure! It’ll be fun! Nobody knows how it will turn out! And even if it’s a total disaster, remember this (and it’s a maxim with considerably broader implications, so maybe write it down): It’s just the Internet. Seriously. It’s just the Internet,” The Awl, a big fan of both exclamation marks and philosophical skepticism of the Internet that’s not usually found in an Internet company, concluded. 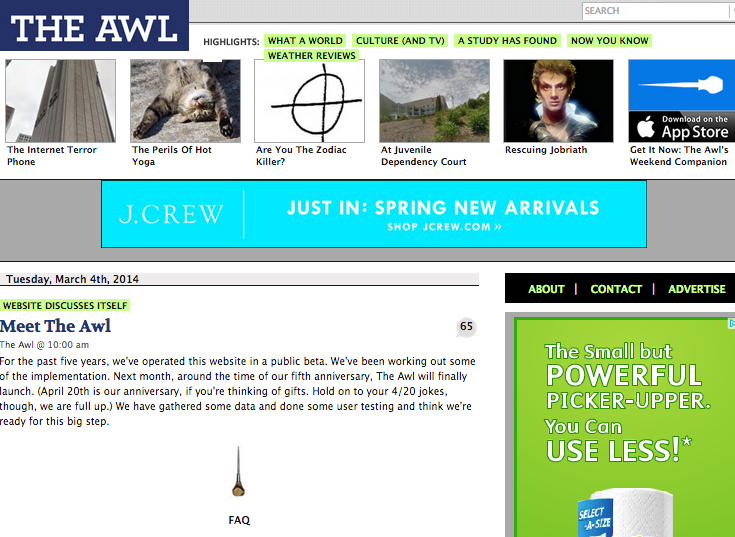