On that night back in 2011 when Felix Roque upended Sal Vega and the people began appearing in the streets to celebrate in the vicinity of Roque’s headquarters and Town Hall, a tall, usually extremely affable-looking man could be seen glumly getting in a car and vacating the area.

It was then-Hudson County Democratic Organization (HCDO) Chairman Mark Smith, the mayor of Bayonne, who like U.S. Sen. Bob Menendez (D-NJ) was a staunch backer of the freshly defeated Mayor Silverio “Sal” Vega.

Smith digested Vega’s takedown as the first – fairly or not, Vega had raised taxes over 40% – loss of a turbulent chairmanship that included at least one telephone chew-out session from Menendez before spectacularly ending last year with the overthrow of HCDO-backed Mayor Jerry Healy by Steven Fulop.

Having bet on three hobbled horses in WNY, state Sen. Nia Gill (who went belly up in her Smith-backed 2012 CD10 bid), and Jersey City, but also gained his share of followers convinced of Smith’s diplomatic prowess and specifically his finesse in handling the overlord-sized egos of state Sen. Nick Sacco (D-32) and state Sen. Brian P. Stack (D-33), Smith fell back to Bayonne.

Insiders over the summer in the six parish blue collar burgh saw the mayor in shirt sleeves pounding on doors in expectation of a 2014 challenge. But early murmurs of Fulop exercising a revenge streak with a full-blown Jersey City assault of Bayonne proved premature.

“He’s smart,” an insider said of Fulop. “He knows that coming in here would be counterproductive. Remember the old line in Bayonne, ‘Home rule, not Hague rule.’”

Running for re-election now against Police Captain Jimmy Davis in a cop versus cop showdown, Smith must face at least one specter from a past election, however, and its roots lead straight back to West New York.

That’s where Joe Demarco, an attorney born and raised in the Heights section of Jersey City, used to tell any number of people trying to squirm away from him in disbelief that his candidate, Roque, was going to beat Vega, and even after breaking the math down, the campaign manager found himself amid a lot of unbelievers.

And now Demarco is working as the campaign manager of Jimmy Davis, relocating daily to Bayonne’s Broadway after day job duty as an attorney in West New York.

Demarco’s presence as the main brain of the Davis camp has political insiders gabbing. Respected after the Roque win, DeMarco gives the otherwise politically fawn-legged Davis, braced by any number of longtime local Smith nitpickers, at least the appearance of a foundation under him.

Just like he did in West New York three years ago, Demarco looks serious again, and talks strategy opportunity in clear cut terms. “Taxes have gone up… under Smith, the mayor’s changed the rent control law and 61% of the people in town are renters; you’ve got teachers in  Bayonne who still don’t have a contract,” he says.

Davis allies are in the field with a rent control petition they want on the ballot to drive voters to the polls.

Smith is reacting like Davis is throwing real punches.

The mayor yesterday released a glimpse of his first TV ad, and his veteran campaign manager, Assemblyman Jason O’Donnell (D-31) plans on plenty of follow-through.

Even with the tom toms sounding in the backrooms of insiders intent on a Hudson contest this year and hoping Bayonne will deliver, at least one Bayonne expert doesn’t buy the makings here of a competitive contest and questioned the mayor’s tactics.

“What is Smith so worried about?” the insider, speaking on condition of anonymity, asked PolitickerNJ. “I already received a mailer to go along with the commercial.  He could break 60% against Jimmy.  Or are they trying to make it look like a race so that he can be considered a comeback kid?  Seems a little early to start the media campaign.”

“You run scared or you run unopposed,” an insider told PolitickerNJ.

The mayor has the resources and he will use them.

In his vehemence to put down Davis, he’s showing a Menendez streak, also ironic given that it was Menendez who desperately unsuccessfully tried to prop Vega three years ago, and the U.S. Senator who reamed Smith when the chairman picked his own CD10 candidate. 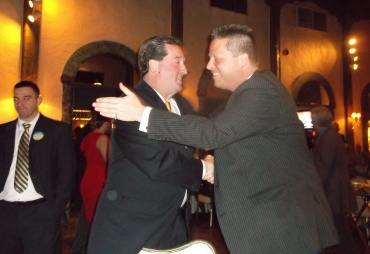