In the ongoing debate over what opera is supposed to be in the 21st century, I’m very much on the “total theater” side of the question: give me a high-concept Regie production with exciting singing actors and I’m in heaven.

But now and then, the opposing, more traditionalist opera partisans, the ones snippily called “canary fanciers,” turn out to be right after all. Opera can, in fact, be something beautiful and moving even when all a performance has going for it is some really excellent singing. And that’s what the Met has served up in its current revival of Bellini’s La Sonnambula, vocalism so splendid it hardly matters it’s happening in a dramatic vacuum.

True, the 1831 work isn’t spellbinding theater to start with. It’s an example of a hybrid form called “opera semiseria,” which combines the working-class characters and domestic situations of opera buffa with the lushly melodic heartbreak of opera seria, topped off with a happy ending. The “sonnambula” or sleepwalker of the title is the village maiden Amina, engaged to the jealous Elvino. One of her nocturnal wanderings lands her in the bed of a visiting nobleman, which convinces Elvino she is unfaithful, but another episode of sleepwalking at the end of the show proves her innocence.

This slim plot provided numerous opportunities for Bellini to spin out the wistful or downright melancholy melodies for which he is celebrated. Amina’s aria in the final scene as she dreams of her lost love, “Ah non credea mirarti” (I never thought this flower would fade so soon) can be considered the epitome of the bel canto style. It’s a seemingly simple tune that blooms into transcendent beauty in the hands of a soprano who balances superb technique with sensitive expressivity.

Diana Damrau is a practically perfect Amina, her light soprano shimmering with a pearly radiance especially in a ravishing mezza voce. Her first aria begins with the words “Come per me sereno,” and that is just how Ms. Damrau sings: serenely, with a centered, unforced sense of joy. Later, in the “sleepwalking” aria, she softens the sound to silvery filigree, like a dreamer murmuring to herself. The effect is not so much of loss experienced as of loss half-remembered.

In the giddier moments of the role, Ms. Damrau is more the extroverted performer familiar here for her Queen of the Night, Zerbinetta and Rosina, with rapid-fire coloratura fireworks and a stage-illuminating personality. Even in these flashier moments, though, she retains a sweetness and modesty altogether appropriate for this uncomplicated heroine. When the soprano soars to high E-flat, the sound is delicate and crystalline, and her trills and coloratura scales are all lightly sketched in. At the moment of Amina’s joyous awakening, Ms. Damrau so overflows with happiness she joins in the chorus’s folk dance, interpolating a couple of nimble cartwheels into the choreography.

Javier Camarena as Elvino surpassed even Ms. Damrau’s triumph, though. The baby-faced Mexican tenor is a relative newcomer to the Met, having sung only a handful of performances of Il Barbiere di Siviglia back in 2011. By the end of his first aria at Friday night’s Sonnambula, though, it was clear the company had a new star, a rival to fellow tenors Juan Diego Flórez and Lawrence Brownlee for the title of “King of the High C’s.”

Mr. Camarena’s voice combines the flexibility and high range usually associated with the “tenore di grazia” type with an unusual depth and richness of timbre. It’s a voice that paradoxically sounds both voluptuous and elegant, passionate yet perfectly controlled. Even in the quietly sustained lines of his opening solo, “Prendi l’anel ti dono,” he never wavered: the voice spun out with perfect repose, immaculately in tune and without even a hint of strain. Later, he made the cabaletta “Ah, perchè non posso odiarti” dance with subtle inflections of rhythm, capping the piece with a high B-flat that sounded like he could have held it forever, but stopped only because the orchestra ran out of music.

Also notable was some very stylish singing from Michele Pertusi as Count Rodolfo, the guy whose bed Amina invades, as well as an alert and sympathetic supporting bit by mezzo Elizabeth Bishop as Amina’s foster mother Teresa. Rachelle Durkin’s tart soprano brightened up the role of the not particularly sinister villain of the piece, Lisa the innkeeper—or, in this version, Lisa the bitter stage director who does her best to make all the singers miserable.

I can’t help thinking this character is unintentionally autobiographical, because the actual director of the opera, Mary Zimmerman, seemed determined to stamp out the work’s delicate charm by superimposing a heavy-handed  “let’s put on a show” concept. Instead of setting the piece, as written, in a 19th century Swiss village, or indeed placing the action in any sort of reality, she imagines the whole opera as a rehearsal for an opera, for La Sonnambula, in fact.

The action is confined to a spacious loft with a wall of windows looking out into a block of downtown Manhattan. Amina’s sleepwalking takes her down an aisle in the Met’s orchestra section, across a ledge outside the rehearsal room, and finally onto a ramp that cantilevers over the orchestra pit, leaving Ms. Damrau looking either magically suspended in space or else like she’s about to take a swan dive into the second violins.

Since this staging opened in 2009 to a booing audience and almost universally negative reviews, Ms. Zimmerman has edited out some of the fussier bits. Amina no longer rips apart wigs and throws shoes during her opening aria, and she and Elvino are not asked to sing the first act finale while being spun around on a brass bed. But the story still makes no sense on either level, rehearsal or reality, and the finale ultimo, a galumphing production number in lederhosen and dirndls, threatens to drown out Ms. Damrau’s coloratura under stomping feet.

Marco Armiliato’s conducting wasn’t exactly delicate either, stiff in tempo in the slow arias and overly brassy in the joyous choruses. But he mostly stayed out of the way of Ms. Damrau and Mr. Camarena so I’m not complaining. When singing is this good, it’s easy to forgive just about anything. 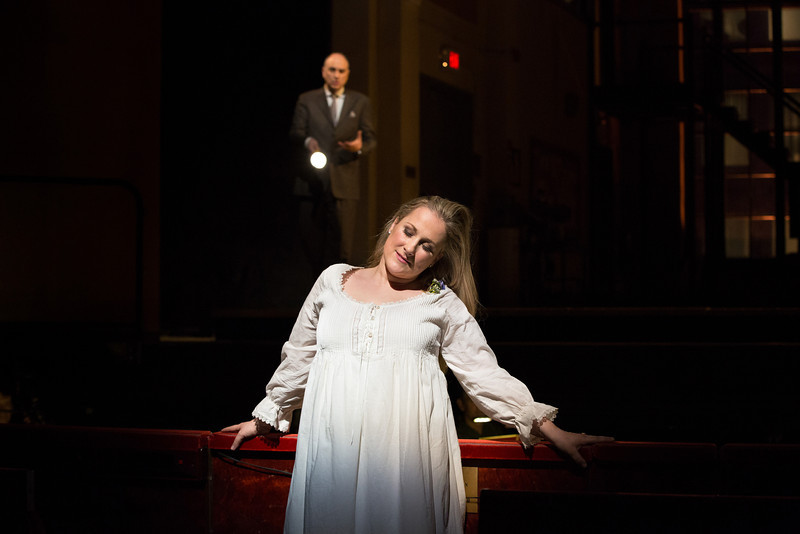