On a chilly Manhattan morning, Shoshanna Lonstein Gruss exudes a professional calm and charismatic composure. This is a woman with too many blessings not to be nice. With a thriving fashion business, a growing family and now, a role as an arbiter of style for one of the world’s most renowned cosmetic brands, this former ‘it’ girl has finally shaken off her old ghosts.

Clad in Rag & Bone jeans and a Chinti and Parker sweater, Ms. Gruss perches on a settee by her fireplace. “It’s been dreamy to be in New York during the snow. I’m the only person who has loved the weather this year. I love being a shut-in with my family, though they all want to be out,” she says.

In the mid-1990s, Ms Gruss became known for her romance with the comedian Jerry Seinfeld. Their relationship began when she was just 17, after he reportedly spotted the Nightingale-Bamford schoolgirl hanging out in New York’s Central Park. Ms. Gruss later enrolled at UCLA to be near her super-famous beau, but the pair were hounded by relentless press coverage.

In 1994, People magazine wrote, “She is subject to such scrutiny that her choice of living quarters and clothing, or even a decision to wear sunglasses on a cloudy day, inevitably gives rise to talk that she is putting on airs or, as one student put it recently, ‘trying to let everyone know that she’s dating somebody famous.’”

At the time, the criticism was heavy, but Ms. Gruss always presented a fabulous front, rocking fitted dresses and flamboyant colors to wild applause. Working hard to support herself in an LA boutique alongside her studies, Ms Gruss was inspired to help women find clothes to suit their body shapes after meeting so many customers who struggled to fit conventional sizing.  What else could she do, she asked herself but start a clothing line? Shortly after the launch in 1998, she told the New York Observer, “I go to parties where there are cameras. I like going out. I like to play. I’m 23. That’s part of my life right now.”

Ms. Gruss is not oblivious to the contrast of her grown-up self, so content in the pleasures of the hearth and home, with the perception of the curvaceous “it” girl who founded her eponymous fashion line in 1998.

“My whole life, starting as a young teen, I was a hard fit for clothes,” she recalls. “I was incredibly voluptuous, and it was frustrating as a young woman to not find things that fit well and made me feel celebratory of my body. I’m fortunate that I had a mom who helped me find those things or altered them, especially my swimsuits. I was a size 2, but then I had a very busty top, and it could be very damaging for young girls to not feel like they can find things that work for them.”

So despite Ms. Gruss initially planning to work in investment banking, she was gripped by the desire to start a fashion line after a stint working in a Hollywood boutique.

Upon returning to New York, she apprenticed at a lingerie company in the Garment District and cites the valuable experience she gained there in “design, fabric sourcing and garment construction.” Her first designs were bra-friendly dresses, often in peppy preppy prints—sundresses in gingham or cheery print fabrics.

Bloomingdale’s saw her samples and placed a $30,000 order, scheduling her to show the day after Thanksgiving in 1998. The New York Times rather meanly remarked, “If you are young and used to date somebody famous, you can be a clothes designer.”

Bloomingdale’s sold more than half of what they bought—an astonishingly high percentage. Ms. Gruss recalls that 68 pieces moved the first day alone. “We were in 10 stores that November during the resort period. … We were in 159 the next year.”

Reflecting on her 16 years in fashion, Ms. Gruss notes that the business in Manhattan has changed dramatically. Her operations are based in the Garment District on 39th Street, where she has been nearly since the beginning. However, she notes wistfully, “The Garment District is shrinking—it’s such a bummer.” And while she still tries to do 90 percent of her production in New York, she explains, “There are many fewer places to manufacture. People are going overseas. When I started, we did our embroidery here. And now, they’re all in China or India; there aren’t any embroidery places left in New York.”

Ms. Gruss has capitalized on friendships with other former “it” girls of the New York scene, including Charlotte Ronson. The pair collaborated on Made With Love, a swimwear line, in 2009, and Ms. Gruss has also worked with accessories whiz Judith Ripka on a jewelry collection. Famous friends aside, her designs are favorites with the quirky-girl style set—Zooey Deschanel, Emma Stone and Taylor Swift are all fans.

Personally, Ms. Gruss chooses a low profile. She likes Instagram and is on Twitter, though she rarely tweets and hesitates to broadcast too much of her life. “Sometimes, I’ll see a mom, and she’s putting things up there when you know her children would not be O.K. with them. I think people forget the whole world is watching or could be.”

But then, that’s something Ms. Gruss learned very early after her relationship with Mr. Seinfeld. Things at home are much more quiet now. She and her husband, Joshua Gruss, the CEO of Round Hill Music, welcomed Sienna in 2005, followed by twins Angelica and Joseph Colby in 2012.

When we meet, she’s wearing a Jennifer Meyer necklace that bears the initials of all her children, and she glows when talking about them.

“My daughter and I have these mornings where we go out, about once a month, and walk around Chinatown or somewhere. It’s such a great New York experience. We went to Williamsburg this weekend. We went to the music store Rough Trade and then had the ramen noodle burger at Smorgasburg. It’s so amazing; we felt like we were visiting another country.”

In the near future, she may be taking her daughter through the red doors of Elizabeth Arden. In the fall of 2013, she was appointed the brand’s first-ever style director, with the company’s official press release stating, “Shoshanna will collaborate closely with the brand on everything from trend forecasting to design and innovation.” The partnership came about following a Polyvore contest a little over a year ago for which Elizabeth Arden offered giveaways from Ms. Gruss’ collection. After realizing they worked well together, Elizabeth Arden brought Ms. Gruss on to help introduce the brand to younger customers.

“Growing up in New York, the red doors were as elegant and iconic as it got. I remember being a little girl and thinking I want to go there one day,” says Ms. Gruss, revealing that her mother was a longtime user of the company’s Eight Hour Cream. In turn, Elizabeth Arden is happy to have a New York society stalwart as its “spokesperson, content curator and style ambassador.”

Ms. Gruss admits: “There’s somewhat of a perception that it was a mother’s brand. I think one of the things that I want to do is help reintroduce them. I have grown up with and worked with tons of editors and style makers, and I’m introducing the brand to them in different ways.”

And no matter what, she’ll be in New York, at least until swimsuit season. “We love it here,” she says proudly. “My husband and I grew up here. We have to stay; no one else would take us. I couldn’t imagine living anyplace else, though I love to travel and experience other places. I think it’s a gift for our family to be here.”

You can’t help but feel that, at age 38, Ms. Gruss is finally having the best laugh. ν 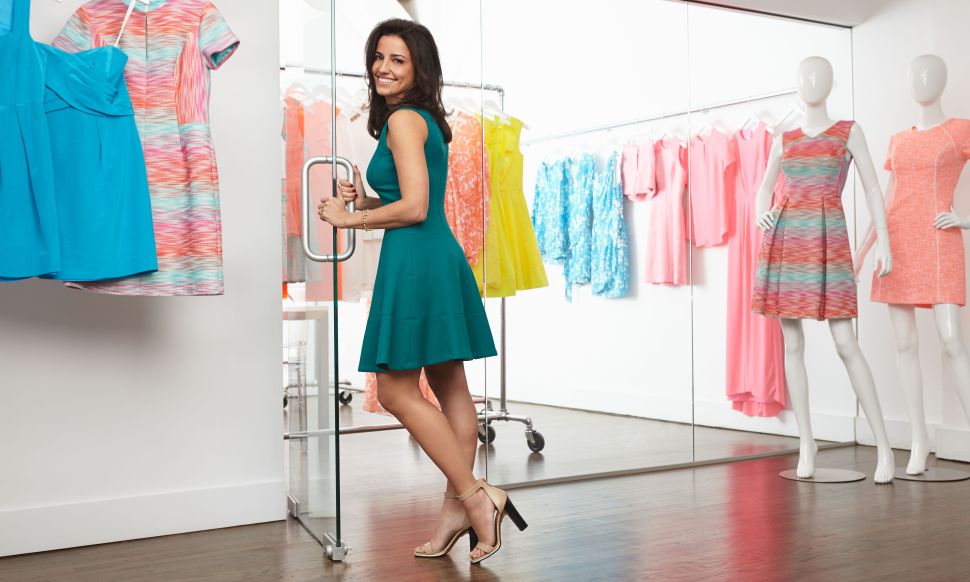