If you’re going to call your band Wild Beasts, your music better be intense. The indie-rock quartet from Kendal in northwest England that has given itself this mildly preposterous handle knows how to reach the necessary emotional level. Whether the mood is one of swooning romanticism, abject lechery or deep depression, Wild Beasts’ songs never go in for half measures. Hayden Thorpe, the more clean-cut of the band’s two singers, closes his eyes, makes passionate hand gestures and emits a pure, near-operatic falsetto. His scragglier counterpart, Tom Fleming, has a gruff, earthy baritone and moves with such random unsettled energy that you think he might reach out and slap you—or at least steal your drink—at any moment.

Last night, about 75 lucky fans jammed in between the record racks at the tiny Other Music store on East 4th St. to watch a half-hour performance by Thorpe and Fleming, who sang and switched off parts on a lone acoustic guitar. Amid all the seriousness, there were frequent bursts of levity. Fleming closed the first song, “A Simple Beautiful Truth,” with a quick guitar filigree. Thorpe turned curiously to his partner and inquired, “Was that showmanship?” Fleming’s response: “That’s what Michael Angelo Batio would call a trill.” (Cue guffaw from yours truly; I was not expecting that particular king of metal shred guitar to be referenced at this event.)

Thorpe introduced the next selection, “Mecca,” by noting that they’d performed an acoustic duo version of it on camera in Holland recently, and that one of the Dutch studio crew had commented, in a manner suggesting his intentions were helpful, “Nice song, but it looks like you’re taking a heavy shit when you sing it.” (Watch the video above and judge for yourself.)

Over four albums, the most recent of which is Present Tense (Domino), Wild Beasts have been developing an intricate sound layered with electronics—equal parts Japan (the group), Talk Talk and Radiohead. But even stripped down to the basics, their songs still compel. For “Palace,” the new album’s closing track, Thorpe took on the guitar duties, picking out high harp-like arpeggios while crooning the words of a character fully absorbed in love. “You remind me of the person I wanted to be,” he sings, “before I forgot.”

And then the masterstroke: a cover of Miley Cyrus’s “Wrecking Ball,” dedicated to the band’s two other members, guitarist/keyboardist Ben Little and drummer Chris Talbot, who were lurking in the back of the store. As Thorpe’s and Fleming’s voices united and separated in tortured harmony on lines like “All I wanted was to break your walls/All you ever did was wreck me,” the effect was both utterly absurd and strangely beautiful. They even got the reluctant crowd to sing along.

The Wild Beasts (full band) will be playing at the Music Hall of Williamsburg tonight. Word is that the show’s sold out. Do what you can to get in. 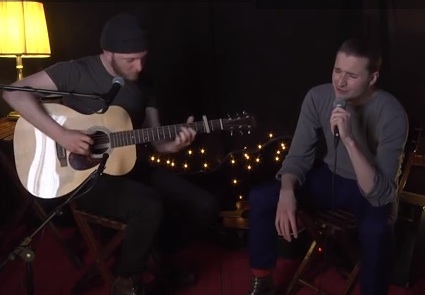