Four years ago, I wrote a firsthand account of my dealings with fashion photographer Terry Richardson in an attempt to clarify an ongoing debate about whether he’d been abusing his position of power to coerce sexual favors from young models. By writing my story, I hoped to move on from the experience and remove any benefit of the doubt people might be giving him about how he obtained his most explicit images: at least in my experience, not with prior informed consent from all parties involved, but via manipulative bait-and-switch tactics he’d seemingly been honing for years. By signing my name to my story, I hoped to legitimize it as something weightier than anonymous Internet hearsay. Perhaps most importantly, I wanted to warn other girls about how he operates, because his modus operandi was not yet common knowledge.

Since then, I’ve been called a liar, a famewhore and a malicious writer of “revisionist history.” I’ve come to the unpleasant realization, via photos, that there are things that happened that day that my brain won’t let me remember. I’ve had numerous Richardson-related nightmares. I’ve lost at least one steady-ish (albeit low-paying) freelance gig. I’ve had colleagues I once looked up to—people whose job it is to speak truth to power—tell me I had no right to tell that story or blame anyone but myself for what had happened. Meanwhile, Mr. Richardson has continued on his merry way, shooting pictures of Beyonce and Lady Gaga, garnering a lighthearted profile in The New York Times, and nailing a succession of young, reluctant-but-not-technically-raped girls with impunity.

And yet, the story hasn’t gone away. It seems like every year around its anniversary, someone’s asking me to comment on some newly surfaced nastiness. Others who’ve signed their names to firsthand accounts of his poor on-the-job behavior include Liskula Cohen, Sarah Hilker, Coco Rocha, Sara Ziff and, most recently, former art student/nude model Charlotte Waters, whose story resembles my own to an eerie degree despite having happened five years later. Lena Dunham has said she regrets shooting with him. A movement to boycott publications and brands that work with Mr. Richardson is gathering steam, from the #nomoreterry hashtag to the Change.org petition, which links to some very NSFW examples of Mr. Richardson’s “work” on nudeimagehost.com. When the Model Alliance formed, one of the first things it did was set up a system to report sexual harassment and assault, and its members have worked to win models the basic protections that most other kinds of workers take for granted. I’ve seen heartwarming displays of resistance and solidarity from people all over the world.

This all must finally be making a dent in his bookings, or at least his reputation, because Mr. Richardson recently deigned to respond to the allegations at length, for the first time, in a letter published by Huffington Post. I was initially content to let others, like Flavorwire’s Tom Hawking, explain with great eloquence why he’s full of shit; believe it or not, it’s not my favorite subject to discuss. But as time passed I felt the need to chime in, because seriously, fuck this guy.

Mr. Richardson begins by calling the whole brouhaha “a cycle of Internet gossip and false accusations against me.” Another word he throws around is “libelous.” If he really thinks I’ve libeled him, he’s welcome to sue me for the $1,043.67 that currently resides in my bank account. But then I’d counter-sue him for libel as well, because I stake my livelihood as a writer of non-fiction on people trusting me to tell the truth.

He purports to want to correct the rumors, then goes off on a grandiose tangent situating himself as heir to the artistic legacy of Helmut Newton and Robert Mapplethorpe. Like so many before him, he uses “I’m an artist!” as a blank check to do as he likes, missing the point by about a mile. It’s not his art that’s being attacked, but how he goes about making it. It’s just as possible to sexually harass people while making still lifes, snow tires, or office furniture as it is making “challenging artporn” or whatever he calls his work. I won’t get into how deeply unchallenging to the status quo I find his images, because like I said, it’s irrelevant.

He never explains exactly what we’re lying about, except to say (emphasis mine):

“I collaborated with consenting adult women who were fully aware of the nature of the work, and as is typical with any project, everyone signed releases. I have never used an offer of work or a threat of rebuke to coerce someone into something that they did not want to do. I give everyone that I work with enough respect to view them as having ownership of their free will and making their decisions accordingly, and as such, it has been difficult to see myself as a target of revisionist history. Sadly, in the on-going quest for controversy-generated page views, sloppy journalism fueled by sensationalized, malicious, and manipulative recountings of this work has given rise to angry Internet crusades. Well-intentioned or not, they are based on lies. Believing such rumors at face value does a disservice not only to the spirit of artistic endeavor, but most importantly, to the real victims of exploitation and abuse.”

Let’s break this down:

Neither Charlotte Waters nor I was aware that “the nature of the work” was for him to whip his condom-less dick out and see how far he could push us. When you sign up for a nude shoot, the “nature of the work” is generally just that: a nude shoot. During my time as a naked girl for hire, I worked with plenty of other photographers who managed to be perfectly professional; if anything, they went overboard to make sure I felt comfortable, as any decent human being should.

If he really wants to make sure his models are “aware of the nature of the work,” why not sit down with them beforehand and talk about what they will and won’t do, as is standard in the American porn industry? Why not put out an ad specifically looking for women who are comfortable getting facials on camera? Lord knows there are plenty of them! Why not have models sign releases after the shoot, not before as is his wont? Why not hold himself to a standard of enthusiastic consent, and not just the absence of a firm no? Why not do everything a man in his position can do to make sure girls aren’t coming away from his studio with symptoms of PTSD?

Answer: because he gets off on violating boundaries. Either that, or he’s delusional enough to think that the girls he shoots are all having tons of fun with him. But if that were the case, shouldn’t he feel guilty instead of angry to learn he wildly misread multiple women’s experiences? The bare minimum of consent required to stay out of jail is not an appropriate yardstick by which to deem one’s actions ethical. (There’s a separate, bigger-picture conversation to be had about whether even unambiguous consent magically makes something exempt from critical examination.)

One doesn’t have to make explicit offers or threats to benefit from an uneven power dynamic. That’s why we have sexual harassment laws (for everyone but models, anyway). In the case of castings, the offer of work is implicit. Especially when a girl’s agency has instructed her to make the guy happy at all costs and sent her there without a chaperone. I have heard stories of people who made the opposite decision—who said no—and just like that, the casting was over. We need these standards to protect the girls who say no just as much as the ones who say yes. Nobody should be forced to make that kind of decision, even if they are technically making it of their own “free will.” Contrary to what Atlas Shrugged might have taught you, just because you’re free to choose between a set of bad options doesn’t mean you’re truly free.

And don’t get me started on Leslie Lessin, the assistant/enabler who helps Terry Richardson do all this. A stylist by trade, Leslie Lessin’s main purpose on Terry’s clothes-free shoots, as far as I can tell, is to make the girls feel like they’re lame prudes if they don’t do all the super cool sex acts she and Terry are requesting. Then she does damage control afterwards if the girl seems upset, like a real-life Effie Trinket. It’s easy to see how the presence of an older woman on set would create a false sense of security; it’s harder to see how any woman could justify helping Uncle Terry stick his bare penis in girls fresh out of high school. I mean, I’m only 29 and I feel extremely protective toward girls who are on their own for the first time, probably because I remember what that’s like and how crazy it can be. And also because I’m not a monster. I want them to learn and grow and try and fail and go after the sex they want to have, not the sex they begrudgingly submit to because someone impressive starts doing it to them and they don’t want to be rude.

While I might seem angry, I’m not without sympathy for the man; my best guess as to what drives his behavior is that, damaged by the emotional abuse of his mother and the sexual abuse of other adult women—both of which he’s discussed in interviews, though not exactly in those terms—as well as rejection by female peers in high school, he’s taking out unresolved issues on an endless succession of girls fed to him by an unregulated industry. But that hardly justifies his actions.

It boils down to this: you don’t have to be dumb to be manipulated by a powerful sociopath. As long as structures are in place that allow this to happen, it’s going to keep happening, and Terry Richardson is only one example. But the tide is turning against men like him, so hopefully most people will see his letter for what it is: an attempt to throw a thin smokescreen of excuses over some truly unjustifiable shit. 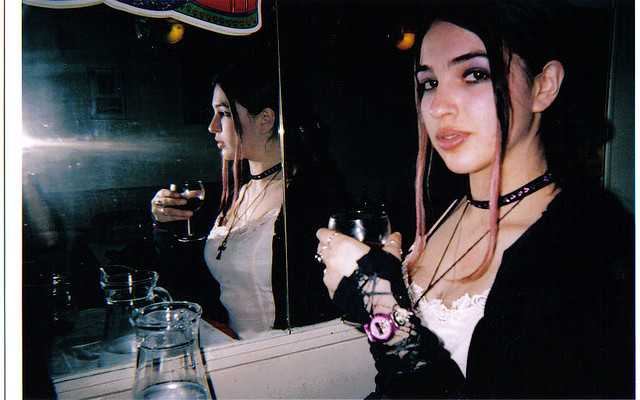