The Middlesex GOP Screening Committee last night could not conjure a majority for any of the U.S. Senate candidates.

“You have to have a two thirds vote to get the committee’s support, and none of them received that,” said Republican Chairman Sam Thompson.

Thompson said that after three ballots, Ramapo Finance Professor Sabrin came in first but with insufficient votes get the screening committee’s support.

Turkevage, an FBI agent, was second.

Candidate Jeff Bell did not screen.

“I dont think it says much of anything at this point execpt that neither [Turkavage and Sabrin] could get two thirds,” Thompson said.

“I received the most votes in all three rounds of voting,” the candidate wrote in a morning email blast. “One county leader told me that she was not going to vote for me, but after hearing my five-minute presentation and listening to my responses during a 15-minute Q&A session, she became an enthusiastic supporter.  After making a 15-20 minute presentation, most county committeemen and women realize who has the best chance to defeat Cory Booker in the fall.  Next stop, the County Convention on March 22.

“In short, with several counties holding their conventions next week, I am building a head of steam I expected when I announced my candidacy four weeks ago.”

Two candidates presented themselves as challengers in the Sixth District: banker Harry Eppanapally; and attorney Anthony Wilkinson of Old Bridge.

Neither could get two thirds support from the committee. 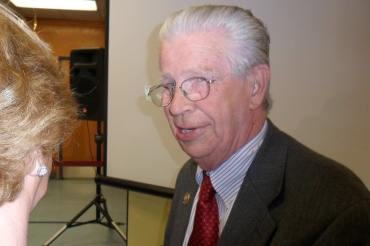