TRENTON – Standing in his campaign headquarters on South Broad Street, Trenton mayoral candidate Jim Golden surveyed the local political landscape, one that was scorched by the legacy of former Mayor Tony Mack, now a convicted felon.

And with his new council slate by his side, Golden looked out at both Trenton’s past and his present May election opponents.

Then he dropped the bomb.

“Some have suggested to me that I just need to think outside the box when it comes to city government. My response? We need to blow up the box, and re-purpose it into a functioning, accountable and highly ethical city government,” Golden said to sustained applause. “When your house has termites, you don’t put new windows and siding on it. You rip it down to the foundation and start over. That’s exactly what we need to do with this city government.”

The government of New Jersey’s capital city has reeled in recent weeks in the aftermath of Mack’s conviction on federal bribery and extortion charges and his subsequent removal earlier this month.

But Golden, a police veteran who served as Trenton’s Police Director, has assembled an at-large council candidate slate of Rafael Valentin, Christine Donahue and Andrew Kennedy as part of his insurgent campaign to re-brand Trenton in the post-Mack era.

Golden outlined a detailed plan for improved municipal governance, including trimming Trenton’s twelve municipal government departments down to eight, making the Trenton works its own department, developing and implementing a comprehensive crime reduction plan with target-specific benchmarks within the first 60 days of a potential Golden administration.

The development of a special operations unit in the Trenton police department for tactical deployment in high crime areas of the city is another of Golden’s policy goals.

Golden’s plan to strength the city’s ethics board speaks directly to Trenton’s recent political troubles. With numerous candidates now scrambling for control, several sources have told PolitickerNJ.com that internal polls indicate that Jackson is in first place by a considerable margin over Golden, but that Golden could surge over the top if a June runoff election is necessary.

Speaking to an audience bruised by Trenton’s recent political turmoil, Golden, 63, a Philadelphia native, reminded the crowd how the city got into its present predicament.

“Former [Philadelphia ] Mayor Wilson Goode taught me what it means to be a leader. And former Mayor Tony Mack taught me that just because you we’re born and raised in the city of Trenton doesn’t mean that you have a monopoly on what’s best,” Goode said.

“We don’t need another name-you-know mayor. This is not an Eddie Murphy movie. This is real life. We need somebody that’s going to be in the fight right along with us,” said Trenton resident Kelli Mitchell, 45. “Everybody knew who Tony Mack was. And he just ran wild.” 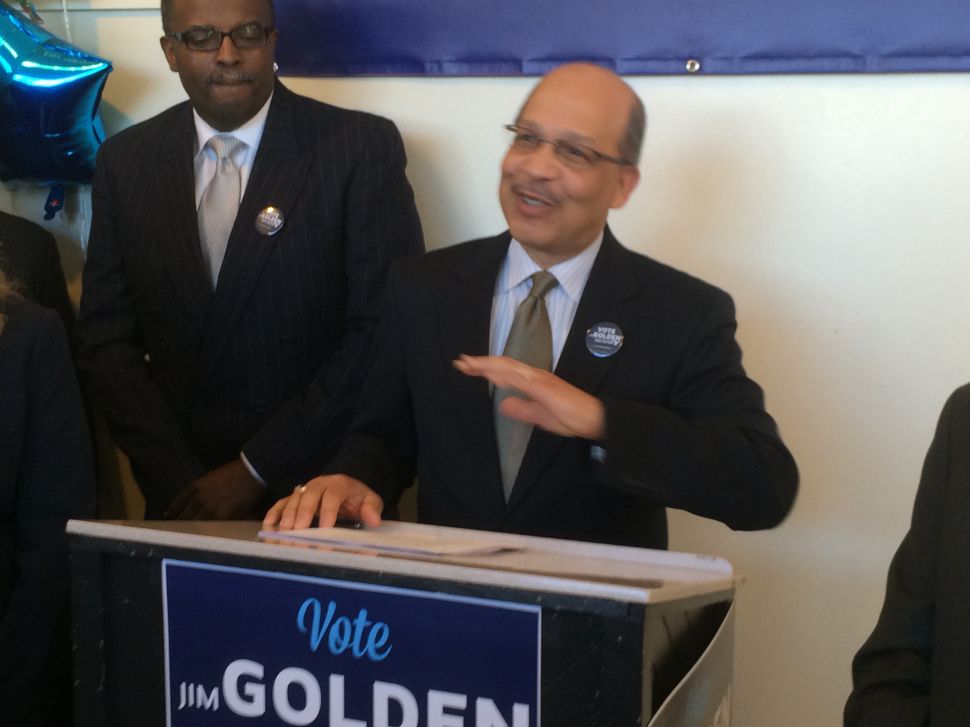