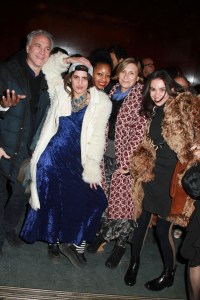 “BCBGMAXAZRIA partners with the
Whitney Museum of American Art for the
2014 Biennial Opening Night.” (Photo and caption courtesy Patrick McMullan)

“Scenes,” read a label on David Foster Wallace’s Cuddly Cuties™ branded Pale King notebook on the fourth floor of the Whitney Museum at the Biennial opening Wednesday night. The object raised a few questions. Was it necessary to include one of the greatest writers of his generation in this museum show, when he’s already received no shortage of tributes since his suicide five and a half years ago1? And if a writer had to cover this particular opening, might it be, in just this one case, acceptable to attempt an imitation of Wallace’s trenchant, scene-oriented style of journalism2?

Colleagues have already written many smart things about the art in the show and soon they will write many more, leaving yrstruly3 to cover just the opening, which felt dominated by its scenes. All of it was entrances, exits, stops, chats. People always complain about how you can never see the art at events like this but that didn’t seem to stop every single last person in New York City from showing up anyway.

The evening began in a line that wound around East 77th Street from Madison back to Park Avenue, admittedly padded by a break at number 36 where two cops forbade us from waiting outside because a “Russian official lives” there. (I stood with an artist in the Whitney’s collection, who had identified himself as one to the overworked women with the iPads at the front but was told to wait with the rest of us.)

The museum, a line attendant informed us, had purchased a hot chocolate truck for the evening and for those in line offered tickets redeemable at the truck, an attempt to ease our 28 degree chattering. End of line to door: 26 minutes and 33 seconds.

The most popular feature at the Biennial by far were the doors leading from the stairwell to the exhibition floors. There people cheek kissed or grasped a hand and then slid away from acquaintances like they were on a slowly departing train going off to war, so that anyone just looking for big names to talk to risked becoming an accidental doorman at every threshold.

“More like the Knut Hamsen Biennial!” the critic Eric Banks told a friend as they disentangled themselves from the crowded, harrowing Bjarne Melgaard installation, where Mr. Melgaard lounged on a couch with a giant set of lips on it for most of the night, and received visitors near a mannequin exposing herself. From the garish piles of rugs to the silent video of Jim Jones, it all came together in just two months. He likes to work that way, “otherwise it gets too stale.”

The artist Zoe Leonard’s room, a camera obscura that projects nearby buildings onto a wall, only works during the day so visitors had to stumble through the darkness of it guided by a guard with a flashlight and then emerge blinking.

“This room is heaven to me, I can’t get enough of it,” said a certain Lyotard fetishist I know, just inside the room dedicated to the publisher Semiotext(e). Outside the room a handsome guy said to a pretty girl in fur, “I’m sorry we haven’t seen each other, I had a mental breakdown.”

Does all this seem petty? It basically is (and none of it was the Whitney’s fault), but I was there to talk to famous and Artforum-famous people, and most of them had left by the time I’d finally made it in. Or, in the case of Jay Jopling, they were too jet-lagged to talk.

Consider this, too: such scenes, such frustrations are going to be all of our arty lives for the next few days. In the weeks that follow, what will remain for you? The art or the headaches?

In the basement by the bar, a friend of mine working at an ADAA booth at the Park Avenue Armory this week said the food was usually good at that opening, from which he’d just come, but it depends where your booth is because you can’t leave it for too long.

“I thought we were going to have those mini burgers, that station near our booth? And I was like, ‘Yes!'” he said. “Then they started stocking it and turns out we got the veggie and the paella patties. The thing about paella patties?”—Luckily a bar had been near his booth—”Is that you get a bad clam in one of them, that taste in there? Not cool. So what I did was I took the quinoa paties? And dipped them in the weird sauce for the crab cakes. People were like what are you doing. I was like whatever, I gotta eat SOMEthing. I wasn’t far from the meatball station but do you know how fucking long it takes to get to a meatball at the meatball station? I went back three times and I got seven meatballs. One was really chewy, gristly. Had to spit it out.”

By the end of the week you’ll be right there with us. The crowdedness had put me there, but mostly I blame my already being there, so early in the week, on David Schwimmer.

David “of Friends” Schwimmer walked past me, leaving, as I finally made it to the front of the line. Would have lost my place for sure if I’d chased after him. Unbelievable. You people were deprived of David Scwhimmer’s explanation for why he was at the opening of the Whitney Biennial.

Correction, 3/5, 5:25 p.m.: An earlier version of this post misstated the brand for the notebook on display at the Whitney that contains David Foster Wallace’s “scenes” for The Pale King. It was not Rugrats™ but Cuddly Cuties™. The Rugrats™ notebook was dedicated to some other use.

1. No.↩
2. Ibid.↩
3. Just kidding. That’s really the last Wallace reference and I would never try to ape him. He’s inimitable.↩