The item was an essay-speech he gave at an event for Bookforum magazine about a month ago; it was syndicated on the websites of Creative Time and the Guardian this afternoon.

Mr. Byrne, the former frontman of the Talking Heads, is worried by the “mass surveillance undertaken by the National Security Agency” and “the general creepiness of companies like Google and Facebook.”

“As the Internet has become more integral to our lives, we’ve simultaneously become more vulnerable, and the web has started to act like a bully, a drug dealer,” Mr. Byrne observes. “It knows we need it, love it and are addicted to it, so it can take advantage of that need.”

The piece, in which Mr. Byrne goes on to suggest that we could perhaps “break” the Internet, has been generally well-received on Twitter—to which Mr. Byrne does not belong—and Facebook. He also envisions a “third way,” a utopian future in which amenities like email, Wikipedia and web-based journalism—hallelujah!—still exist but “we can’t be tracked as we are now.”

Mr. Byrne, who appears to be a kind of reluctant Luddite, has his reasons for disliking the Internet. He is, for example, a vocal opponent of Spotify, and he has said that the web “will suck all creative content out of the world.”

But there are reasons to dislike David Byrne on the Internet, on which he too often gets high-minded and pedantic. Mr. Byrne’s writing, a decent chunk of which you can find on his website, is dull and flat and uninteresting; reading him is mostly a joyless affair. (Summing up Mr. Byrne’s nonfiction book How Music Works in the Times two years ago, the book critic Dwight Garner said it was “as forgettable as a real estate agent’s handshake.”)

“Before a catastrophic collapse like the one I described comes,” Mr. Byrne grimly concludes, “let’s find it within ourselves to give up some convenience and become a little more human.”

This is the kind of statement someone who isn’t thinking hard enough makes. A person staring at a computer is no less human than a person staring at a tree. Slogging through Mr. Byrne’s latest essay, you yearn for the kind of spot-on analysis of the Internet that Evgeny Morozov and Alexis Madrigal, to name two excellent technology writers, provide.

There is a touch of playful absurdity—the kind you’d find in his music—to Mr. Byrne’s latest piece, which he refers to as a “thought experiment.” I saw him give it at the Bookforum event, and although the speech felt paranoid and kind of messianic, it was hard not to laugh at his delivery.

Mr. Byrne is, after all, a performer. And so I’d like to chalk his self-seriousness up to some grand piece of performance art, but his stuff feels so earnest that it’s hard to believe this is the case. He belongs on the stage. On the page—or screen—the humor is gone and David Byrne is a bore. 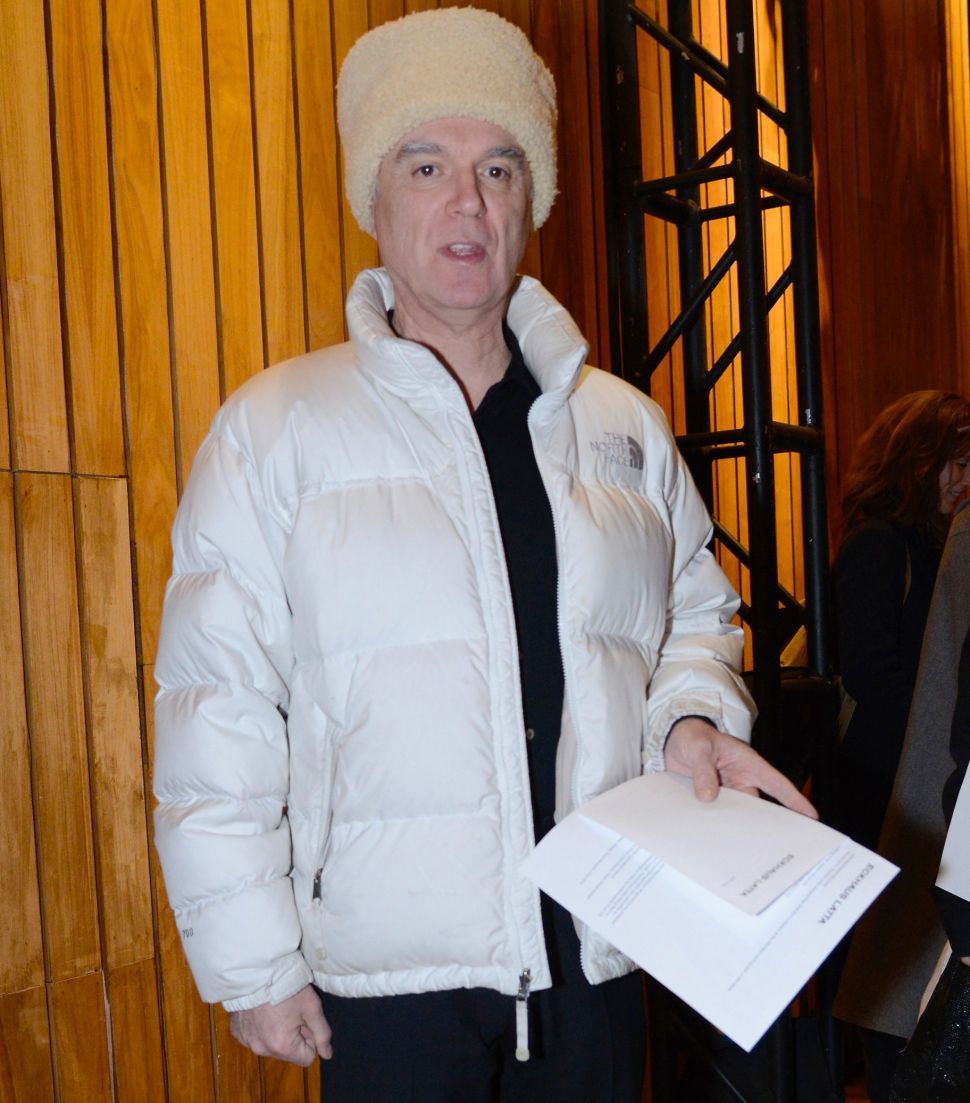