In recent years, the vote in favor of Avery and Paul, who if confirmed by the Bergen GOP convention vote on Thursday will take on incumbent Democrat Freeholders David Ganz and Joan Voss in November, would be viewed in the light of intra-party intrigue.

Bergen County Executive Kathleen Donovan and Yudin have struggled for control of the Bergen Republicans for years, a conflict heightened by the fact that Bergen, New Jersey’s most populous county, is seen as the bellwether county in statewide elections.

But Donovan and Yudin publicly declared a truce in December, proclaiming unity in advance of what could be a bruising 2014 re-election campaign for Donovan against Democrat Freeholder Jim Tedesco.

Yudin told PolitickerNJ.com that last night’s screening committee was business as usual, and that the peace pact between him and Donovan was still in place.

“Last night’s vote was based upon the presentations that were made,” said state Assemblywoman Holly Schepisi (R-39). “I don’t believe that any particular candidates are being pushed by anybody. We’re just allowing the process to evolve.” 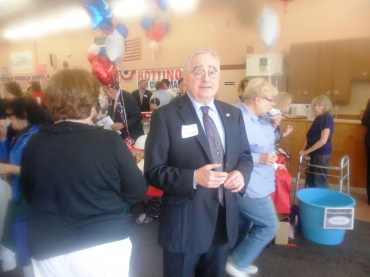