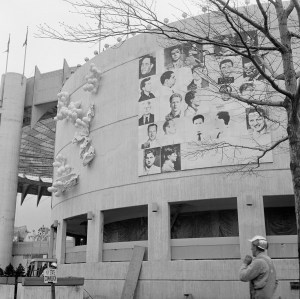 Andy Warhol’s most celebrated period, during the mid-1960s, included his only public work: a vast 20 by 20-foot mural entitled 13 Most Wanted Men, put on display at the World’s Fair in Queens in 1964. The painting was only visible for 48 hours before it was destroyed, a casualty of political censorship. Just in time for the 50th anniversary of the World’s Fair, the Queens Museum of Art has reopened the incident with a sinewy but glamorous exhibit, beautifully researched and curated by Larissa Harris.

No, the actual mural isn’t here. It was covered with silver paint by order of Governor Nelson Rockefeller, and, most likely, later discarded. On view instead is archival documentation on the creation, destruction and afterlife of Warhol’s controversial artwork, as well as nine of 13 stand-alone paintings he later created using silkscreens from the mural.

Among the rare documents on view is 13 Most Wanted, a 1962 booklet issued by the New York Police Department to all members “for the…capture of fugitives,” from which Warhol drew the mural’s source images. The criminal suspects stare sulkily from the page in roughed-up mug shots above aliases like “Tanky,” “Sal” and “Skin.” There are the letters commissioning Warhol to create the project. (Rockefeller asked architect Philip Johnson to design the New York State Pavilion for the fair. Johnson commissioned 10 contemporary American artists to make works to hang outside his circular building—Robert Rauschenberg, Roy Lichtenstein, John Chamberlain and Ellsworth Kelly among them.) There’s even the bill for $680 from one Aetna Silk Screen Products Inc. for the completion of the mug shot silkscreens. 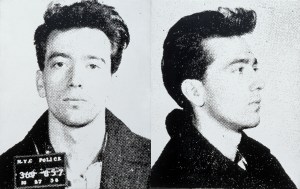 The exhibition includes photographs of the completed mural, as well as copies of tabloid newspapers reacting to the imagery as a celebration of local thugs, and concerned letters between Rockefeller and the artist. (While Robert Moses is often blamed for the mural’s censorship, it was Rockefeller, running for re-election at the time, who, because seven of the 13 men depicted had Italian names, wanted to distance himself from any implication that his Italian-American constituency had criminal associations.) A telegram from Warhol gives permission to paint over the canvas. He chose silver paint—he was making his silver “factory” at the same time.

The show does a terrific job highlighting the public art issues Warhol’s work aroused. Warhol was master of the double-entendre—“Wanted” men refers not only to the fugitive status of the criminal suspects but also their popular celebrity. The screen test film The Thirteen Most Beautiful Boys, from the same year, underscores the covert homoeroticism of the title. Warhol reused screens from the mural to make his Most Wanted Men paintings, which were shown at Sonnabend Gallery in Paris in 1967, and have been reassembled here from European and American collections. They are far more intimate than the mural. Other works on view include Brillo Boxes, paintings from Warhol’s “Death and Disaster” series, and a portrait of Rockefeller, whose history of censoring public art in New York began with his encounter with Diego Rivera. 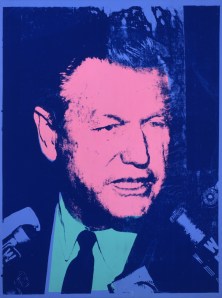 The exhibition gives us Warhol at the top of his game—a master manipulator of the thin line between notoriety and celebrity, whose paintings took the pulse of public life. His correspondence showed he handled the incident with unflappable cool. A five-minute walk from the show is Johnson’s concrete pavilion itself, a bit of Warhol’s history hidden in plain sight on the route between Manhattan and JFK. (Through Sept. 4, 2014)