This probably wasn’t the worse call the NYPD received that day.

A mob of live mannequins posed alongside their plastic counterparts at the Gap’s flagship store on 5th Ave until police shut the prank down, according to the New York Post.

The participants, dressed in Gap-style clothing over their white, skin-tight suits, walked into the store nonchalantly with their masks tucked into their shirts.

Prepared to play mannequins for all the store’s sections (including underwear),the pranksters dispersed throughout the store, and at exactly 3:36 p.m., zipped up the heads of their morph suits.

While many customers and Gap employees laughed, and took photos (yes, even selfies) with the “mannequins,” some didn’t even notice that the too-human mannequins were impostors.

Participants planned to freeze in place for five minutes then walk around like stiff mannequins, but the police shut them down early after a manager called in a flash mob.

Police mistook the mannequin mob for a clever robbery and handcuffed half of the participants, including Mastermind Todd.

Other participants were able to hide their masks and snuck by officials. A few even changed out of the morph suits in dressing rooms and walked out like regular customers.

“I first heard people saying that we were gonna be banned from the Gap which bummed me out because I have a gift card, and I didn’t know what to do,” one participant said. “But then thank god it all worked out, so no crying.”

If this man can still use his Gap gift card, then everything worked out just fine. 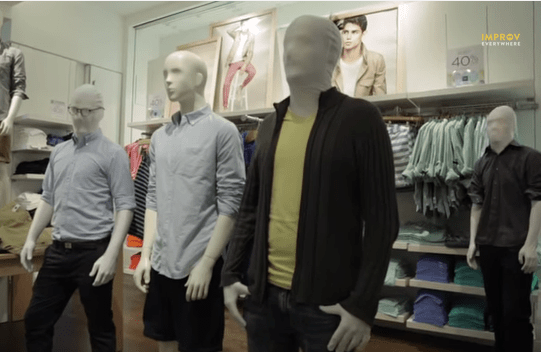