Maybe the coolest thing about being a sporadic music writer is that sometimes you get to hear a band’s record before it comes out. But there’s an annoying rub when you fall so in love with it that you want to play it for everybody and you want to talk about it all the time, but the file you got from the record label is password protected and you have to be like, “Arrrgghh just wait, it’s not out til May.” You feel like a dick, especially in this age of instant cyber gratification, like when bands throw songs onto Bandcamp with no fanfare, no publicity, not even an actual physical record or CD. It’s pretty revolutionary, that Bandcamp. And perhaps the old publicity lead-time paradigm is not that useful anymore. Please discuss this someplace else. Right now I’m talking about the Cincinnati band known as Wussy and that I have access to their upcoming record, Attica.

Wussy is on a very short tour right now, which hits NYC tonight. I’m told they will have advance copies of Attica on the merch table! As usual, you New Yorkers are luckier than most of the country. Don’t get a big head. After you pick your copy up at the show, please come back here and we can talk about how on first listen, I didn’t think it was as amazing as their older stuff, but on second listen I suddenly felt completely blown away. I won’t spoil it for you except to say that the closing song, “Beautiful,” is exactly that. It is my favorite, and not just because it borrows the “sleeping bag rolled up behind the couch” line from Glen Campbell. I might even wish it was the first song, but then it wouldn’t be the last taste in my mouth when the album ends, so I concede to the concept of smart sequencing.

But wait: You’ve heard of Wussy, right? I feel like nobody reads music criticism anymore and I’m writing this into a ravine right now. It’s not enough that Christgau gives them straight A’s; they should be more famous. Whoever is taking T-bone Burnett’s job on that show Nashville should make those characters cover all the Wussy songs. OK, a little backtracking: Do you remember a band on OKra Records in the 90s called The Ass Ponys? When I ask people this—people who are ostensibly in-the-know—as I did last night at a gig in Boston with Barbara Manning, Dump and The Bevis Frond, the people pretty much say the same thing: “oh YEAH! Ass Ponys! From Ohio! Great band, TERRIBLE NAME’” and then we have to giggle about all the great bands with terrible names, like Vomit Launch or Myracle Brah or heck, Neutral Milk Hotel, before I get the honor of informing them that Chuck Cleaver from Ass Ponys has been in another band for the past few years called Wussy. This is usually met with “Ooooh … that’s a MUCH better name … hahahahaha.” Anyway, shut up.

Wussy is Cleaver’s band with fellow singer and songwriter Lisa Walker, backed up by Mark Messerly, Joe Klug, and John Erhardt (who also was in Ass Ponys). Cleaver and Walker both have tattoos and a penchant for searing pathos and soaring melodies. The press bio and reviews I’ve read like to say that their singing voices are “different yet complimentary,” but I suspect people might be confusing their looks with their sounds. He’s a big grizzled bearded fella; she’s a pretty nature-girl blonde. And sure, she has a higher register because she’s not a he. But I hear a very similar character in their respective styles, they both have a tentative vocal quality that leads to a type of oversinging, but not in a bad way, in a slightly unsteady yet heart-heavy way, pushing the voice through a too-small opening or something, so that it kind of balloons but never really busts wide open. It captures exactly how really intense emotions can feel when you can’t bear to let them out.

Their songwriting is like that as well. Thematically, the lyrics deal in obsession, self-doubt, hunger, disguises, cheating and being cheated on, destruction as a path to renewal. It’s heavy stuff, but with a sense of humor, too. For every song where you wonder if maybe one of them might have actually killed somebody in real life, there’s another that makes you laugh out loud. Wussy is a rock band with country leanings and an obvious knowledge of eclectic music history. They probably listen to a lot of Byrds, Neil Young, Townes Van Zandt, and also Dinosaur Jr, Eleventh Dream Day, maybe some Big Black in there. And when I go to pick favorites, I feel like Steve Martin in The Jerk, “I’m leaving and all I need is this song. Oh, and this. And this other song. I don’t need anything else! And this one too . But that’s all! That’s all I need. Except for this.” (Seriously, click that last link, especially if you’ve ever felt the cavernous ache of saying goodbye to somebody you love and might never see again. It is almost unbearably perfect.)

I could blather for days about all the amazing Wussy songs you CAN have right now, but as I listen through the tracks on Attica again, knowing that you can’t (yet), I’m totally reneging on the spoiler bullshit I said earlier because frankly, I’m terrible at keeping secrets. When people say “Don’t tell!” I hum that circus song in my head or try to remember how to do long division, just to eliminate any risk that I’ll retain whatever stupid thing I’m not supposed to repeat. It’s the only way. But I am weak so here you go.

Attica is Wussy’s fifth album. Two of the songs have been leaked on the interwebs already: “Teenage Wasteland,” which is not a cover of The Who, although it sort of borrows the opening echo-y guitar part a little bit; and a rough mix of “To The Lightning,” (above), a rollicking pop song that is almost REM-ish, but the twisted guitar solos are way ballsier. “North Sea Girls” is the prettiest song on the album, with tinkly reverberating piano runs that remind me of Graeme Jefferies’ work in The Cakekitchen. “Acetylene,” a mellower number propelled by haunting strings, is about the prison of acquisitions and the kind of torch it would take to reignite a failing relationship by basically incinerating it. “Halloween” is a swingy rustic tune that paraphrases Kris Kristofferson and Neil Young lyrically and musically. “Rainbows and Butterflies” is a blasting hardrock burn where Cleaver growls about how much he’s gonna kill you, suck you, and so forth, underscored with angry feedback guitars. “Bug” takes a more psychedelic path, and the way Walker croons about the “bug that’s alive inside of me,” all I can think of is that Vincent Price movie‘The Tingler” where the parasite creeps into your spine, but will only kill you if you don’t scream. The title track is a shimmering singalong using the cry of “Attica, baby, Attica!”—yes, like from inside Sonny Wortzik’s head!—as a euphemism for true love! 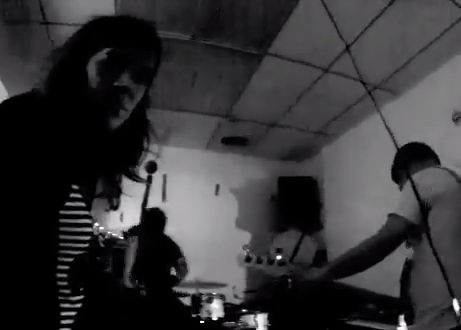