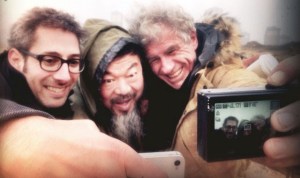 Chinese artist and activist Ai Weiwei will star in The Sandstorm, a sci-fi short set in a world without water, according to The Hollywood Reporter. Because Mr. Ai remains under close police surveillance, the film was shot surreptitiously. “We told no one what we were up to,” writer and director Jason Wishnow states on the project’s Kickstarter campaign page. “The crew used code names and ever-shifting modes of communication.”

Mr. Wishnow, the former head of video at TED Talks, met Mr. Ai after a secret TED Talk smuggled out of China landed on his desk. According to him, Mr. Ai “listened, confided he loved sci-fi and asked how fast I could write the screenplay” during their initial meeting, which ended when plainclothes policemen compelled Mr. Ai to leave with them. The film was shot in Beijing by Christopher Doyle, the renowned cinematographer of Chungking Express and Hero.

The Kickstarter had secured $17,288 of its $33,000 goal at press time. “We needed to keep the film a secret and didn’t want anything sabotaged so we decided to postpone crowdfunding until AFTER we wrapped,” states the project page. A release date for the film has yet to be announced.

Thanks to Artforum for drawing our attention to the news.