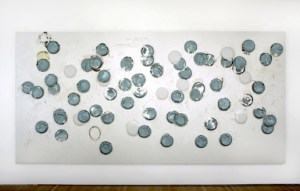 Lately a very public battle has broken out in the art world over the marriage of art and money. Its two most vocal opponents are a boastful, bombastic dealer and a critic who frets like a bitter champagne socialist sans the bubbly.

What’s at issue is the short term—ok, very short term—buying and selling of contemporary art for ever-increasing prices. This practice is fueled by the recent phenomenon of historic prices being achieved for often very young artists with little or no market or exhibition history.

Time horizons for this sort of activity are getting shorter and shorter. People talk of flipping a given artwork in a year or two, but I’ve admittedly done so within a matter of months, even weeks. It’s not that people are selling what they dislike, or have outgrown. They mean to flip from the point of purchase; they are flipping art that attracted them enough to take the leap.

And here is the rub: art is the only marketplace where primary prices, albeit only for some, could be monumentally less at the time of purchase than the immediate secondary levels. Think of it as the opposite of new car syndrome where vehicles lose a significant amount of their value the moment they leave the showroom.

Certain macroeconomic trends have created the perfect climate for this frenetic selling and the seemingly ever-increasing returns. When I started curating in the late 1980’s there were virtually zero non-Western buyers of Western contemporary art, but after years of lip service to globalization, it is finally upon us. And with low interest rates, and volatile stock and commodities markets, where else you can attain such high returns in no time at all? The wealth of new buyers is growing exponentially, but they only want obvious things by obvious artists, which is why you read of so many artists’ markets snowballing into self-fulfilling prophesies.

In their fits of indignation over the fact that the “flippers” are making crazy returns speculating in art, many people seem to have forgotten that there is strong precedent for this kind of behavior. Joseph Duveen, who died in 1939, is one of history’s most successful art dealers. The 2003 book Duveen: The Story of the Most Spectacular Art Dealer of All Time describes his taking out enormous loans to speculate on groups of paintings in estates then systematically selling off the material piecemeal to the industrialists of the time for tremendous profits. He surreptitiously took note of paintings on the walls of unaware party hosts and put the works into play without the knowledge or consent of their owners. The level and extent of Duveen’s art and commerce activities would humble Larry Gagosian. Later came the Swiss dealer Ernst Beyeler, who passed away in 2010, long after funding his own museum in perpetuity, in Basel, Switzerland. He didn’t do it through connoisseurship alone. He financed and traded art like a commodity, a proto wolf of Wall Street.

When Ethel and Robert Scull divorced in the 1970’s and sold their contemporary art at auction for stellar returns, it pissed off Robert Rauschenberg and others but opened the floodgates for the glamorization of the bedfellows of recent art and ravishing returns. By the end of the 1980’s the contemporary art market had mushroomed to the extent that Julian Schnabel, who famously flipped burgers as a short order cook, was among the first to have his recently cooked art flipped for substantial profit. Taking a look at his present market should stand as a stark warning for all of the short-attention-span traders of today.

That artists themselves are in on the market game is a long tradition. Rembrandt was known to bid up his own prints at auction. His assistants, knowing his weakness for money, painted faux coins on the floor of his studio in an effort to get him to pocket them. Marcel Duchamp took his Rotoreliefs to a toy fair in what turned out to be a futile get-rich-quick scheme. And he wasn’t above art advising (cutting a Pollock down to size to fit the foyer of Peggy Guggenheim) and dealing (he bought a Brancusi collection in a 1925 estate sale and sold it piecemeal for profit). Warhol could only dream of the riches achieved by Damien Hirst, and not for lack of trying. But, contrary to common belief, demon Damien wasn’t the first artist to stage a solo auction of his own work. That distinction belongs to Francis Picabia, with a little help from his friend, Marcel Duchamp.

But let’s look at the artists whose work is feeding today’s market machine. Get ready to tar and feather me: Once in a while I’m attracted to the work of Oscar Murillo. After all, who is the disgruntled critic mentioned above to dismiss the entire output of an artist who is all of 28, and still in the nascent stages of his career? Let’s not forget how far John Currin has come from his first exhibition of sophomoric high school yearbook paintings at long-defunct New York gallery Koury Wingate in early 1990’s.

Prepare the guillotine for my beheading, I like the pie paintings of Lucien Smith, which are Soupy Sales–meets-Claes Oldenburg and look delicious.  David Ostrowski has provoked and flouted his audience with a dirty footprint of his “lovely girlfriend, Elena” (pointed out to me as such by one of his dealers as a selling point) as all that filled a six by five foot painting. But sometimes his nonchalance moves me.

Then there are the Israels: Alex Israel’s atmospheric, textured paintings mimic Peter Halley’s surface (in happier, less jarring colors, and minus the prison bars), and Israel Lund, who scrapes off Richter’s squeegeed paint surface resulting in barely there abstractions and adds bars of his own in the form of white stripes. I’m even a sometimes fan of Parker Ito, of the touted post-internet blah-blah, whose throwaway aesthetic is embodied in reflective romantic renderings in some kind of non-archival-looking 3M product.

What I mean to say is, what is all the fuss about? Art is not a zero sum game. There are plenty of ways to play—from visiting free galleries and museums (well, there are a number of free museums in the U.K., where I live, at least) to flipping your art before you’ve even paid for it. Since art came off cave walls it’s been coveted and collected. Yes, many of today’s market darlings will only enjoy one night flings with the market. Contrary to the notion that what goes up must go down, long term, the good things always go up. Trying to figure out, shortly after an artwork is made, whether or not history will favor it—therein lies the challenge and the adventure.

And there is an upside to all the fast-paced buying and selling. It can add to liquidity and make hard-to-come-by art more accessible. And the market can, and does, revive careers.

All of this having been said, the truth is that I suck at selling art. When I do it, I use the proceeds to fund other passions like teaching, writing, and, more than anything, collecting and curating art (much of it with little or no secondary market value, like Paul Thek and Vito Acconci). But the only art I can actually sell is the art that everyone wants. There’s no reason you can’t collect like a connoisseur and sell like a snake oil salesman as long as there is an acceptable degree of discretion, reason, and consideration for all involved.