In 2010, the New York Times printed an item entitled “B. Smith Closes a Chapter” under the heading “Big Deal,” which proved to be a misnomer. While it was true that B. Smith—a designer, decorator, restaurateur, model and television personality—and her husband Dan Gasby had listed their penthouse at 200 Central Park South, there was no deal to speak of, and there wouldn’t be for years. But sources tell the Observer that the couple has at long last closed the aforementioned chapter, unloading their 2,100 square-foot two-bedroom for $5.6 million.

“If it was in one of these six-star buildings like Trump, or 15 [CPW] or the new Vornado that’s going in up the street, this would have been a $25 million apartment,” said Stephen Wald, head of Stephen Wald Real Estate, who handled the listing. “I sold them the apartment in 2002, and they did a major renovation. It’s in really lovely condition and the views are staggering: You can watch the ball drop out one window and turn around watch the fireworks over the park.”

Mr. Wald estimated that the couple spent $1 million updating the co-op, which they bought for $2 million, and they described its style to the Times as “Afrasian,” evoking the combination of of African and Asian aesthetic sensibilities that also characterizes the home décor Ms. Smith sells through Bed, Bath & Beyond. (The broker described the designer, whose full first name is Barbara, as “the African-American Martha Stewart.”) At the time of the initial listing, Mr. Wald said, the apartment’s pricing—it wanted $5.95 million—proved too aggressive, and then the couple decided that they’d rather stay put, after all. It’s not hard to see why.

In addition to park and city views—”all the way to Bill Clinton’s office on 125th Street!” in Mr. Gasby’s estimation—the co-op boasts a chef’s kitchen and Japanese soaking tub, a formal dining room and a living room bar fit to quench the thirst of F. Scott Fitzgerald. Revelry, of course, is optional; there’s also a library, for more wholesome entertainments.

Pre-closing negotiations, Mr. Wald told us, were long and tortuous, but the buyers—an out-of-town family very much taken with the apartment—are finally satisfied. An amiable conclusion, which provides Ms. Smith and Mr. Gasby the opportunity to get out of town themselves. They are currently relaxing in Sag Harbor, Mr. Wald said, where they have “a beautiful waterfront home.” Next on the agenda? Perhaps Florida, the broker said—even if they are a few months late. 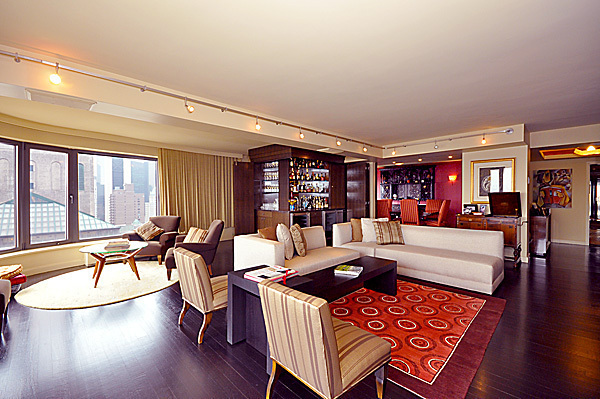