Mayor Bill de Blasio and Assembly Speaker Shelly Silver staged what amounted to a love fest today as they joined to announce a media blitz to encourage parents to apply to new pre-K programs.

Standing side-by-side at Chinatown’s P.S. 1 in Mr. Silver’s district, Mr. de Blasio–who’s been on a victory tour after winning state funding to expand prekindergarten programs in the budget deal signed this week–credited the longtime Albany lawmaker as “the man who’s done the most to advance the cause of early childhood education in this state over the last two decades.”

“You know, Speaker Silver, I think we can agree with the old truism that success has a thousand fathers and mothers. But the truth is, for not just years, but for decades, you have been fighting to make truly universal pre-K a reality in this city,” he said.

“Someone had to get the ball rolling, someone had to take an unconventional idea and bring it into the mainstream. Someone had to set the pace and put the demand forward and eventually won the day. And that person is Speaker Shelly Silver,” he said.

“I have to tell you: If he had not persisted, if he had not made it his life’s work to stand up for universal pre-K, we would not be standing here today announcing the results of this victory–literally would not have been possible if Shelly Silver had not started this work years and years ago. And he deserves a round of applause for that,” the mayor continued gushing, adding that history had been made “because one man stood up long ago and said that someday he would make it so.”

Not surprisingly, Mr. Silver, who has come under fire recently for ethics complaints against his members and the arrest of one of his closest allies, was happy to accept all the praise–and pat his own back in the process.

“Seventeen years and four governors ago, I and my Assembly Democratic colleagues listened to the experts who said a quality pre-K program can lead to higher math and reading scores and long-term academic achievement,” he said, telling reporters that, despite resistance, “we would not surrender our belief that the benefits of early learning” were significant.

He also credited the mayor for bringing the issue front-and-center and commended their “partnership” on the issue.

Mr. de Blasio’s victory, of course, was not complete; while he got $300 million per year of the $340 million he was seeking, the money will not come from the tax on the rich he had championed throughout his mayoral campaign.

Asked whether he would revisit the tax next year, Mr. Silver argued there was no need.

“I think the important thing for me, for the mayor, and for anybody associated with this was having a fund to rely on so we start a program and make the investments in the physical plant or whatever, knowing that next year the money will be there also and into the future,” he said.

Did he think that perhaps in a non-election year lawmakers might revisit the idea? 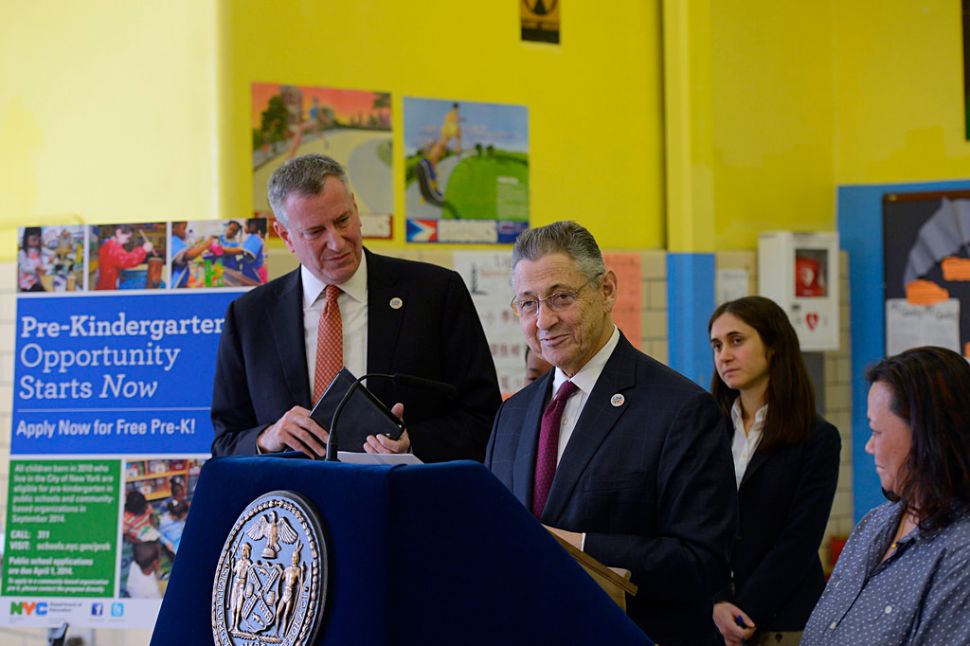