Mayor Bill de Blasio hailed the Rev. Al Sharpton and touted his own accomplishments after nearly 100 days in office at the opening of the National Action Network’s annual convention in Midtown this morning.

”I just want everyone to know: I am proud to stand with Rev. Sharpton,” said Mr. de Blasio before an official ribbon cutting kicking off the week’s event, which will include remarks by the president on Friday. “To borrow a phrase from our youth, reverend: He’s the real thing.”

Mr. Sharpton once again graced the covers of the city’s two tabloids this morning following an explosive report by The Smoking Gun website alleging that he had worked as an FBI informant in the 1980s, helping to snag mob bosses. Mr. Sharpton admitted yesterday that he had helped the federal agency but contested media reports that framed him as a “snitch” and a “rat,” arguing he did what was right.

Mr. de Blasio, who has become a close ally of the reverend, rushed to his defense yesterday and continued to praise him again today.

“I am Rev. Sharpton’s fan, I must admit,” he said. “But there may be an even greater fan of Rev. Sharpton in my household: the first lady of our city, Chirlane McCray. And we both value his advice and his guidance.”

The new mayor also used the opportunity to recap the accomplishments of his first nearly 100 days in office, which will be the subject of a major speech tomorrow at Copper Union’s Great Hall. Before he was in charge, he said, the status quo was “in so many ways unfair, in so many ways unacceptable” when it came to pressing issues like social and economic justice.

Among his most notable accomplishments, he said, has been helping to repair the frayed relationship between community and police–an issue he said came to the forefront following a silent Father’s Day march against stop-and-risk in 2012 led by Mr. Sharpton that Mr. de Blasio said had been a “pivotal moment.”

“We had some clear injustice when it came to the way this city was policing for a number of years,” he said. “It was separate and unequal. Some neighborhoods were treated one way and other neighborhoods treated another way. And for young men of color in particular–who really by definition are the future of this city–too often good, law-abiding young men of color were treated as if they were suspects even though they did nothing wrong. And we said we had to turn that page and turn that page aggressively.”

He went on to credit Police Commissioner Bill Bratton for helping to change that dynamic. “Crime remains low, but social justice is increasing. Respect for every community is increasing. The relationship between police and community is growing closer. So we’re doing both at the same time,” he said.

For his part, Mr. Sharpton returned the praise.

“We have a different city for those of us that live in New York because there’s a new administration now,” the reverend said in his introductory remarks.

The two men were also presented portraits by artist Latrice Jackson. “I’ll make a deal with the mayor. I will hang his picture up at the House of Justice when I see mine hanging up at City Hall,” Mr. Sharpton quipped. 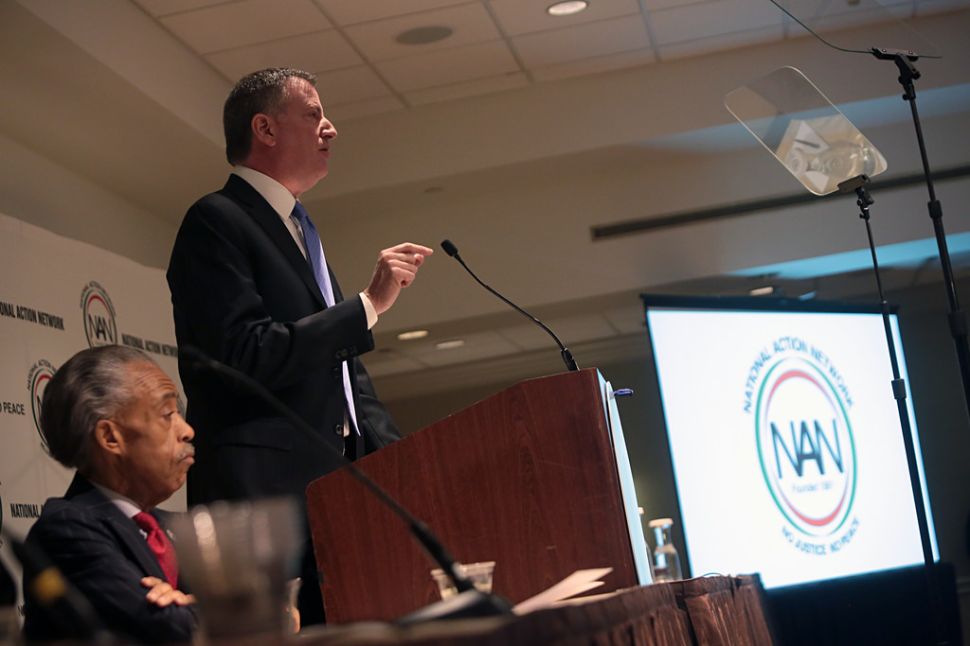