Mayor Bill de Blasio today marked his 100th day in office with a major speech touting his accomplishments so far and setting the stage for the months to come.

The literary reference-heavy State of the City-style speech, which clocked in at nearly an hour, contained no new proposals or policy plans–but functioned as a recommitment by Mr. de Blasio to rebuilding “the progressive city” he said he was elected into office to serve.

“When this administration was sworn into office 100 days ago, there were certainly some who didn’t know what to make of us,” said the mayor, speaking to fellow electeds and supporters at Cooper Union’s Great Hall.

“We weren’t sent to City Hall to change New York’s character. You sent us here to restore New York’s proud legacy as the progressive city,” he said. “In the first 100 days, we’ve already taken great strides.”

Mr. de Blasio, who spoke with the aid of notes but not fully-written remarks, then ran through the chief accomplishments of his administration, and insisted that keeping the city safe and providing key services “was, is and will always be job one.”

He pointed to a 26 percent decrease in pedestrian fatalities in the first quarter of this year versus last, slight dips in the number of murders, shootings, and robberies, as well a pothole-filling bonanza, which saw nearly 289,000 potholes filled this quarter, versus 115,000 at this time last year.

At the same time, he touted the NYPD for repairing tensions between police and community. “They’re keeping crime low, while healing the relationship and bringing communities and police closer together,” he said.

He also touted his work securing the largest chunk of state funding for pre-K in the history of the city, the expansion of paid sick leave–which garnered some of the speech’s loudest applause–and touted his plan to save and protect 200,000 units of affordable housing, which he said he hopes will provide new jobs in the neighborhoods where projects are built.

“We looked from the beginning for every chance to do more, to say to the real estate industry, ‘We’ll work with you, but the public must get its fair share,'” he said, pointing to the Domino sugar development, where the administration was recently able to negotiate the addition of affordable units.

Still, he said, “There’s much more to come. We’ve made our beginning in the last 100 days. And Plato wrote, ‘The beginning is the most important part of any work, for that is the time at which the character is being formed.'”

In the coming months, he vowed to continued to improve the conditions in NYCHA projects by implementing a previously suggested plan for energy retrofitting and to create a new municipal ID card that can be used by undocumented residents. He also renewed his dedication to helping the victims of Hurricane Sandy

On education, he promised more parental involvement in city schools, a new focus on teacher retention, smaller class sizes, fewer trailers and a move away from high-stakes testing–a “misguided policy” that he said had “warped” ideas about education.

As he wrapped up his speech, Mr. de Blasio addressed vague “powerful interests” he said had tried to stymie his plans.

“It will not surprise you that we’ve experienced some resistance from some powerful interests.There are some people who have a stake in the status quo, who don’t want to see thee changes,” he said. “It’s expected that you experience opposition when you try to make changes of this nature; it’s nothing surprising, its nothing new. Our responsibility is to look that in the face and continue our work and deepen our work. Because the real power, the real power resides with the people.”

He ended with a call for action to those gathered.

“Now, more than ever, we need your help,” he told them. “We need you to keep leading the way, keep showing the leaders the path, holding your elected officials accountable. We need you to keep this momentum of these last hundred days growing all the time.” 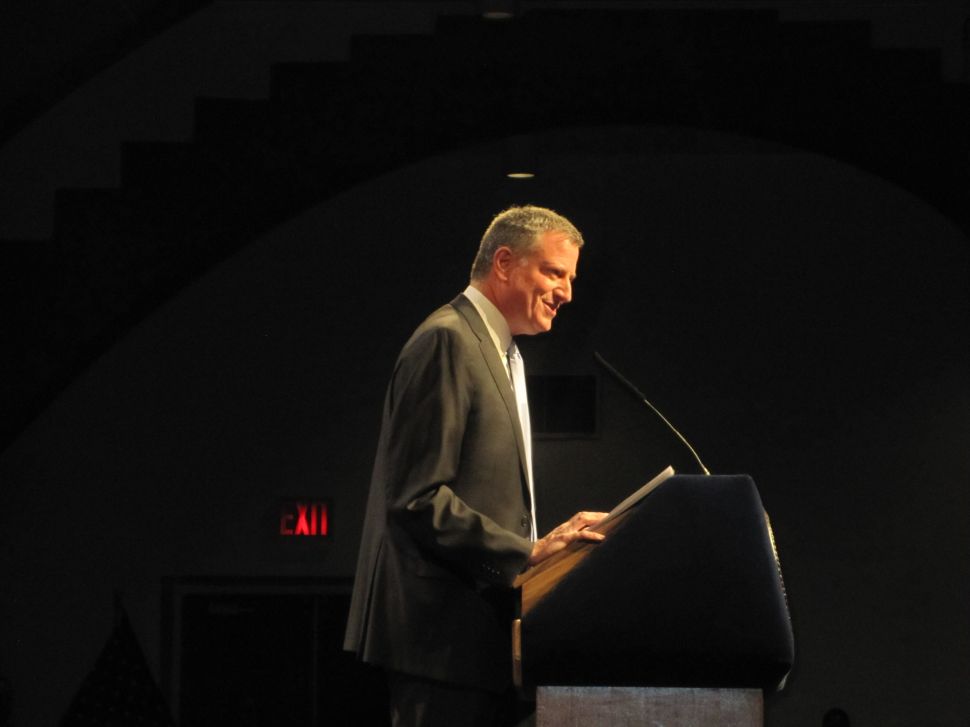