Yep, this happened inside a black car.

What do you do when you’re a black car service in NYC, and you want to get popular enough to seriously compete with Uber? You tell your riders they can literally have anything they want inside their hired cars.

That was the strategy, at least, for Gett, the upscale rideshare app that debuted in NYC last August. To get their name out there, the company yesterday launched the day-long #GettAnything campaign, which allowed riders to request any and all forms of en-route entertainment — as long as it’s not illegal — and have Gett attempt to fulfill their wildest wishes.

Downtrodden by my daily slog to and from Queens, I couldn’t resist testing out the #GettAnything campaign. I scanned the list of Gett’s intriguing pre-planned adventures. I could have requested something totally impossible, like a reunion of the cast of The L Word or a good gluten-free donut, but I figured the items on the list were the ones they did best.

Options included “#GettDid Get your hair styled while you take a ride in a luxury Gett car,” “#GettBananas Ride with your new best pal, Johan the monkey” and even “#GettTatted New Yorkers don’t waste time, get tattooed on your way home.”

I’ve already had my hair done for the sake of #journalism, and I was freaked out by the prospect of getting bitten in the face by a monkey, so I decided I’d have my tarot cards read.

At 5 p.m. yesterday, it was time for my Gett ride. Like with Uber, I could look at the map on Gett and follow my driver’s progress as she made her way to my pick-up spot. She arrived on time, in this insanely huge vehicle: I climbed — literally — into the car. My tarot card reader, Angela Lucy, was sitting in the back with me. There was a board, laden with large crystals, placed on the middle seat between us. As our car rumbled toward Union Square, where I was meeting some friends, she had me shuffle the deck to imbue my energy into the cards, and then ask her to do a reading on a specific area of my life. First, I asked her about my relationship with my boyfriend. She started flipping the cards. She asked if new things had been happening for us — new jobs? Yes, I answered — we’d both started new jobs in January. More cards flipped. She said she sensed there was some confusion in our schedules. Yes, I answered again — I work the day shift, and he works nights. She said I needed to make more of an effort to spend quality time with him. More cards flipped. She said we’d take a leap of faith sometime during the year, like a spontaneous trip to Hawaii, or a sudden move to a new apartment. I’m hoping for Hawaii.

For the next round, I asked for a reading on my upcoming year at work. She flipped the first card, and immediately asked who the “red-headed woman” at work was. I knew that one instantly.  She said she knew we were friends, but not to let excessive “water cooler chat” stand in the way of work. Okay, mom. She flipped more cards. I was going to amass some sort of fortune this year, she sensed. Sounded good to me!

Earlier in the day, I talked with Gett’s U.S. CEO, Jing Wang Herman, to learn more about the company. Currently, the service is live in nine cities worldwide. They only offer luxury black car service for now, but “in time we’ll offer other cars and taxi services,” Ms. Herman explained.

I wanted to know how Gett was different from Uber. Ms. Herman said the “quality of cars and drivers is the same,” but there were a few things that set Gett apart.

First, Ms. Herman noted that Gett doesn’t use dynamic surge pricing. You’ll always have a standard base fare, and then you’ll pay an extra $5 during peak times, like weekday rush hour.

She added that they’ll also sometimes tack on an extra $10 – $30 during high-traffic holidays or inclement weather.

Second, she explained that Gett users could book their cars in advance, whereas Uber only lets you book in real time. Finally, she said that Gett had superior customer service.

Though Ms. Herman said the app already had over 100,000 downloads, she still hoped the #GettAnything campaign would help put Gett on the map.

“We wanted to do something fun and to get our name out for anyone who doesn’t realize that we’re around,” she said. “A lot of people complain about surge pricing but they don’t necessarily know there’s an alternative.”

Sadly, the #GettAnything campaign is over now, but I’d still recommend Gett for booking black cars — if that’s something in your budget. I’d probably use the app to book a car for the airport, but the subway — or even a regular yellow taxi — is still a more practical everyday option. The app was easy to use, and it was great being able to book the car in advance. My driver was really friendly and punctual, and the car itself made me feel like a Kardashian.

Ms. Herman hinted that there may even be more crazy promos to come.

“I think it’s a foreshadowing of what we could do with a name like Gett,” she said. “With Gett, we want to get you anything and everything under the sun — or that money can buy.” 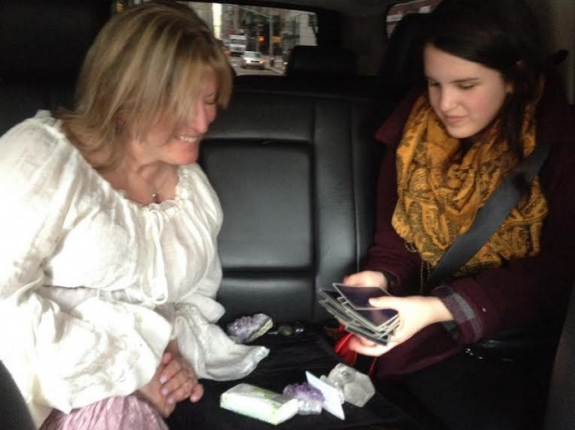