Former Mayor Michael Bloomberg sat down with the Today Show this morning to tout his renewed efforts to curb illegal guns through a grassroots-style campaign aimed at taking on the NRA.

As the New York Times reported this morning, Mr. Bloomberg is planning to spent upwards of $50 million on the effort, which calls for restructuring Mayors Against Illegal Guns and Moms Demand Action for Gun Sense in America into a new group called Everytown for Gun Safety.

In his second broadcast interview since leaving office, Mr. Bloomberg said he hoped to take a page from the NRA by trying to instill fear in lawmakers who go against him.

“People will vote for whatever they think is in their own self interest to get elected and re-elected,” he told Savannah Guthrie. “We’ve got to convince them that the 80 percent of gun owners, the 90 percent of Americas who are in favor of just simple background checks to make sure criminals, minors and people with psychiatric problems can’t buy guns—something that’s common sense—we’ve got to make sure they understand that’s what the public wants and the public’s going to vote that way.”

But Mr. Bloomberg, who is among the nation’s richest men, insisted it was not a matter of just outspending the NRA.

“This is not a battle of dollars. This is a battle for the hearts and minds of America so that we can protect our children, protect innocent people,” he said. “We’re the only civilized country in the world that has this problem. We have to do something.”

“It’s a heavy political lift. 31,000 Americans either get murdered or commit suicide with illegal guns. That’s the heavy lift,” he added.

Public outrage seemed to grow after the 2012 massacre in Newtown, but even then, efforts to expand background checks and limit assault rifles at a national level failed in Congress. Still, Mr. Bloomberg, who was joined by Shannon Watts, the founder of Moms Demand Action, insisted progress had been made.

“Well number one, it didn’t go nowhere,” he said pointing to 16 states he said had instituted background checks on gun shows and Internet sales, among other measures. “So we really are making progress”

The conversation also veered into the former mayor’s own ambitions. As for whether he’d ever consider running for president, Mr. Bloomberg was clear.

“No is the answer. Plain and simple. I’m gonna spend the rest of my life trying to make a better world for myself, for my kids, for my grandchildren and for you and Shannon,” he said, repeating his longstanding argument that a third-party candidate would have little chance of winning, even if the country would be better off.

“Well they may be failing Americans, but this is a two-party country and I think it’s likely that you would ever a third-party candidate that could win. So what we have to do is convince those in both the parties who are running that this is what the public wants and when the you get through their primaries and they come to a general election, they’re going to have to be right on guns,” he argued. “And were gonna do everything we can—Shannon and I and all the people we represent—to make sure we reward those who are protecting lives and make sure that those who are trying to keep people from being protected lose elections.”

Asked whether he missed being mayor, Mr. Bloomberg was much more succinct.

“No,” said Mr. Bloomberg, without hesitation, before letting out a hearty laugh. 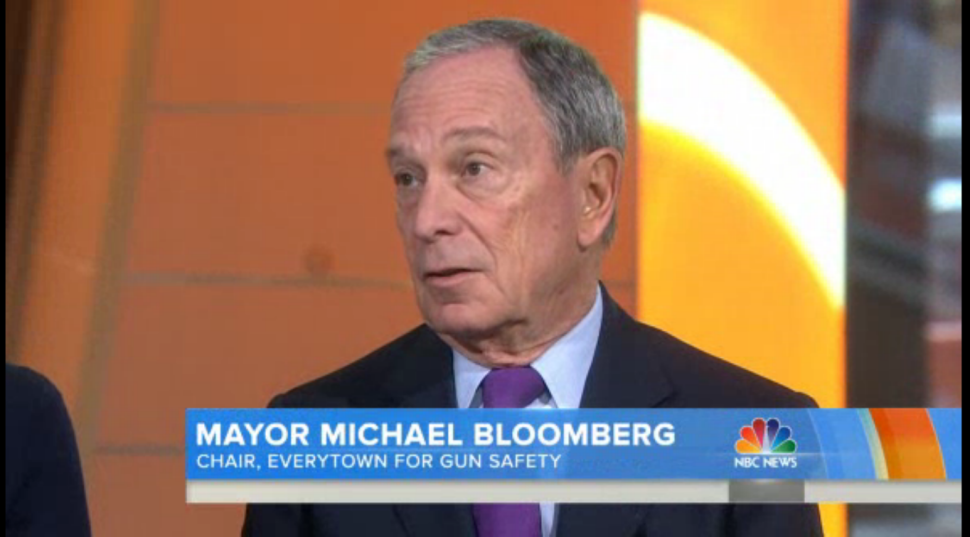