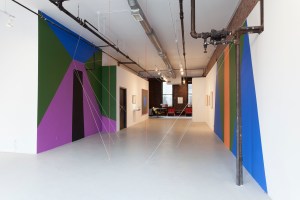 Go to P! on Broome Street. Pause in front of the two typewritten pages of A Geographical Notation on Equivalence and Multivalence of Meaning (Arse/Ass), by the artist Brian O’Doherty. (You may know him better by the name Patrick Ireland, which he used from 1972 to 2008.) Chuckle at the possibilities for hilariously blue transatlantic misunderstanding implicit in the word “fanny.” Proceed to the back, past six framed drawings of grids, lines, text and instructions for performances to be enacted on grids; a 3-by-3-foot white grid on the floor next to a monitor in which two men march around a large multicolored grid; and Sight (Narcissus), a 6-foot-tall viewing box that makes of consciousness something like the black box of pain at the beginning of Dune. You will find two framed drawings, both titled Drawing of Girl and showing exactly the same bodiless head in profile. But on the left, a second brief outline hovers before her forehead like a tutelary genius, while cascading waves of graphite hair cover her eyes; and on the right, whether thanks to intervention in flesh by this genius or to the body’s own opposition to itself, she can see. Continue to Simone Subal on the Bowery, where the narrow ropes of Rope Drawing #120: Here and Now carry the hard edges of two geometric wall paintings up to the ceiling and down to several screws drilled right into the middle of the concrete floor. Wittgenstein’s face in pencil, Marcel Duchamp’s EKG, another monitor and performance—you will resolve it all or resolve to give up on resolution, with the help of a mirror and Ogham, the ancient Irish tally-mark alphabet, which presses the edges and corners of monuments into meaning by either crossing them or not. If you stick your face into the two tall, perpendicular, aluminum-on-wood ingots of One Here Now, you will see yourself double, disappear or move closer, while the needle-like white Ogham scratches—they spell out “one here now”—float on a concurrent plane, either defining the whole or irrelevant to it, as you prefer.