“I’m here out of respect for the governor,” he told PolitickerNJ ahead of Christie’s town hall in his backyard.

“He’s come to my hometown,” he said. “Why miss the opportunity?”

Eck is set to recieve the party’s nomination to replace Holt.

The governor is expected to hammer Assembly Democrats and Speaker Vincent Prieto (D-32) at his latest town hall for the Democratic leadership’s refusal in the lower chamber to concur with the governor’s conditional veto of the expired interest arbitration cap for unionized police and firefighters. 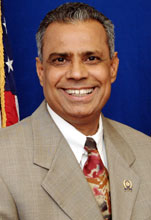