In spring 1996, Jamie Bennett was assigned to escort Kitty Carlisle Hart into the Museum of Modern Art’s Party in the Garden. She took his arm, and they were making their way to her table when Times society photographer Bill Cunningham leaped into their path. Mr. Bennett instinctively flashed his brightest smile and spent the rest of the week telling his friends to look for it in the Style section.

“That Sunday,” he recalled in a recent interview, “I got up extra early, picked up my coffee and bagel at Bagels on the Square and ran to the bodega on the corner of Bleecker and Morton.” When he opened the paper to show it to the woman behind the register, the shot was prominently displayed, but Mr. Bennett had been cropped out—all but his left elbow.

The irony of this particular body part appearing in the paper is that Mr. Bennett, 41, has the least sharp elbows in the cultural universe. Over the past few years, he has ascended the ranks in a variety of high-profile institutions—MoMA, the New York City Department of Cultural Affairs, the National Endowment for the Arts—without stepping on toes. He is that rare cultural figure who is universally loved, whose enthusiasm for high-, middle- and lowbrow art infects anyone within arm’s reach.

“He makes his friends fans,” said Kimberly Watson, a former MoMA colleague now with Alvin Ailey. “Anyone who has spent time with Jamie has a tale of attending at least one opening, reading, performance or concert that we would not have ventured to without his invitation.”

The trailblazing Broadway producer and Mr. Bennett’s boss at the National Endowment for the Arts Rocco Landesman said, “After a career spent so far in making other people look good, he’s now going to be the head guy.”

In January, Mr. Bennett was named executive director of ArtPlace, a nationwide initiative that promotes culture as an economic and social catalyst, funding and celebrating projects ranging from folk dancing to flash mobs to film festivals. Supported by a bevy of foundation (Ford, Kresge, Bloomberg and so on) and corporate (Bank of America, Citi, Deutsche Bank, Chase, MetLife and Morgan Stanley) heavy hitters, ArtPlace is dedicated to “creative place-making.”

“I don’t know what it means,” said Agnes Gund, who employed Mr. Bennett at her foundation for eight years, “but he will be great at it.”

According to Mr. Bennett, Mr. Landesman and the Ford Foundation’s Darren Walker invented the term for a phenomenon as old as Ancient Greece. “The theater was the literal and spiritual center of town,” he said, drawing a comparison to Broadway, which, he pointed out, is the second best known New York City street to foreigners. (The first is Wall Street.) Creative place-making revives and repositions the place-making movement, pioneered by Jane Jacobs and William H. Whyte in the 1960s, as a bridge between culture and daily life.

Make no mistake, this isn’t art for hedge fund managers and oligarchs. It is culture as a resource for communities and a solution for community problems: decaying neighborhoods, street crime, social isolation. Nor is it a good fit for those who view art as a solitary, cathartic experience. “Should every artist and organization be dedicated to creative place-making?” Mr. Bennett asked. “No. If you want to be a lonely artist, no harm, no foul.”

ArtPlace was designed as a 10-year project and is scheduled to sunset in 2020. In its first three years, it has invested more than $40 million into 134 projects in 80 communities. Finalists for the current round include “art as urban acupuncture” in Mesa, Ariz., “terroir-driven” public art in Napa County, Calif., and “micro-granting dinners” in Detroit.

This is a chance, said Mr. Bennett, not just for the rest of the country to learn from New York City but for New York City to learn from places it previously wouldn’t have deigned to notice. Leslie Koch, the president of the Trust for Governors Island, who first encountered Mr. Bennett during his time with the Department of Cultural Affairs, agrees that the city that once Stole the Idea of Modern Art is now in the exciting if unaccustomed role of yet another star in the constellation.

“In the age of Kickstarter,” she said, “the barriers are lower. There are incredible things happening all over the country that are relevant to younger audiences with a completely different sense of culture and media than we are used to.”

Ms. Koch sees Mr. Bennett as a “paradigmatic connector. He takes enormous pleasure in introducing people.” She notes that Punk Island, a festival heading into its seventh year on Governors Island, came about as a result of Mr. Bennett introducing her to Aaron Friedman of Make Music New York.

“Jamie doesn’t flit from one person to another,” Ms. Gund added. “If he’s your friend, he stays your friend forever.” Though he has dipped a toe into social media, his forte is the personal email, the link with the this-made-me-think-of-you comment, that he sends on a regular basis to colleagues, fellow culture vultures and his five godchildren (two in Houston, two in New York and one a senior at Howard University).

A product of Cleveland, rural Pennsylvania and Champaign, Ill., Mr. Bennett attended Columbia University and aspired to a career in the theater (the last woman he kissed onstage: Amanda Peet) before realizing that his strengths lay in administration. He joined the development department of the Museum of Modern Art just as Glenn D. Lowry took over as director and soon migrated into the office of Ms. Gund, who was then MoMA’s president. (I was on the museum’s staff during this time but did not have the opportunity to work with Mr. Bennett.)

Mr. Bennett said that 70 percent of his time with Ms. Gund was MoMA related, but he also helped her in her work with Studio in a School, the American Academy in Rome and Wexner Center for the Arts in Columbus, Ohio. Ms. Gund remembers in particular his tireless efforts in saving 500 community gardens slated for demolition by Rudy Giuliani. “I was going to buy them,” she said. “But how was I going to take care of them?” She left a newspaper clipping on his desk, and soon he had everyone from the Trust for Public Land to the Green Guerillas to Bette Midler in on the act.

When the New York Landmarks Conservancy honored Ms. Gund as a Living Landmark, she worried that she had no talent to display like fellow honoree Beverly Sills, so he commissioned an attention-getting headdress that replicated MoMA’s sculpture garden. And then there was the time he sent a man in a gorilla suit to the hospital to scare the hiccups out of an ailing Lewis Cullman.

“Working with Aggie, I came to understand what it meant to work in the art world,” he said. “She understood that there were always multiple ways of looking at something.”

Mr. Bennett left Ms. Gund in 2005 to serve as chief of staff under Lee Bollinger at Columbia University, but soon the Department of Cultural Affairs lured him away. He describes the moment he informed his new boss of his decision to leave so soon: “I remember telling Lee, ‘I don’t care about all human knowledge equally. I care about art and culture.’” He implemented Kate Levin’s vision for overhauling the way New York City allotted $150 million in annual expense funding and $1 billion in a 10-year capital plan for cultural projects.

His time at the Department of Cultural Affairs coincided with the latest boom-and-bust in the city’s economy, ushering in an era that many artists have denounced as a dark age. Among others, Patti Smith, David Byrne and Moby have all publicly declared that New York has become inhospitable to the creative spirit.

“I love anecdote,” said Mr. Bennett. “But when you’re doing serious policy, you need facts and data.” He cited the work of Joseph J. Salvo (the longtime director of the population division of the Department of City Planning and “the most incredible person I’ve ever met”) and his colleague, a performer who has adopted the name Vicky Virgin, which found no mass exodus of artists. In fact, New York has seen a net increase of individuals for whom art is the principal source of revenue. “There’s a natural churn,” Mr. Bennett said. “And that’s healthy.”

Mr. Landesman sent out an S.O.S. for Mr. Bennett in 2009 after an ugly public squabble with Glenn Beck brought Yosi Sergant’s tenure as the NEA’s director of communications to an end. Mr. Bennett became the NEA’s chief of staff and director of public affairs. Mr. Landesman singles out his willingness to disagree with him as his most valuable trait. At one point, he recalled, the White House nixed an appearance on the Charlie Rose show. “I was indignant,” he said. “Jamie put me in my place with one of his subtle, loving put-downs.”

Mr. Bennett further proved his diplomatic mettle by orchestrating collaborations between the NEA and the Departments of Health and Human Services, Transportation, Housing and Urban Development, and Defense. Mr. Landesman credits him for the launch of music, visual arts and storytelling therapies for wounded warriors.

In D.C., Mr. Bennett was a card-carrying member of the Fellowship of Unassimilated Manhattan Exiles, a support group for New York diaspora. His ArtPlace appointment brings him back to an apartment in Brooklyn and an office at Rockefeller Philanthropy Advisors on West 48th Street, but he’s spending less time here than ever. He has already been to Boston, Charlottesville, Detroit, Los Angeles, Minneapolis-St. Paul, Philadelphia and Juneau, where he visited a shrine to St. Therese, a tiny island that you can only get to via a pedestrian bridge.

“I was looking at the Stations of the Cross and looked out into the sound and saw some sea otters, a school of orcas and then a humpback whale breach clear out of the ,” he recounted. “It was an amazing moment and not one that I had imagined when I signed up to work on arts and the built environment.” 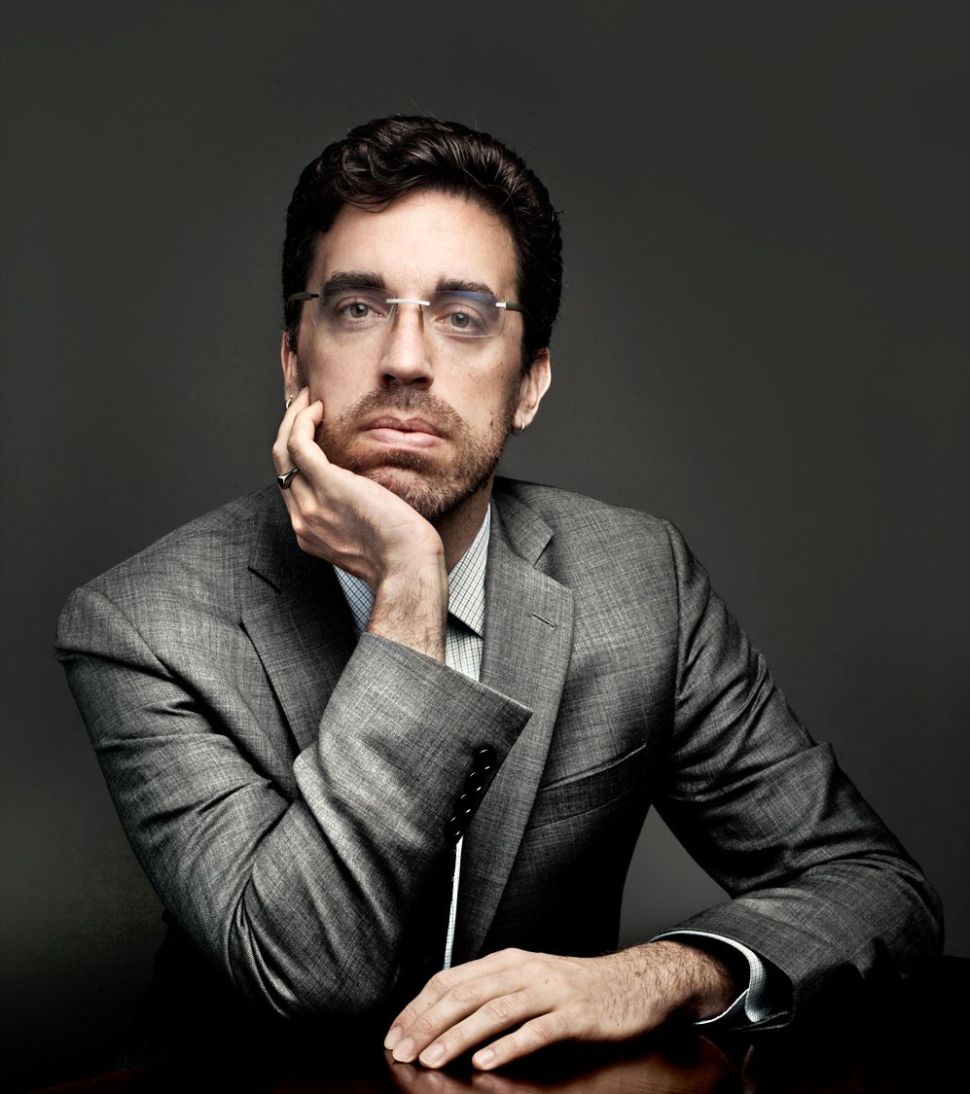