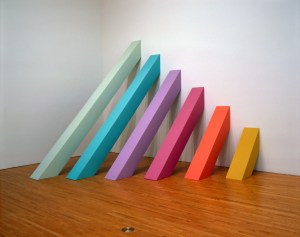 This exhibition, curated by Catherine J. Morris, follows the transformation, over the course of a decade, of put-upon art student Judy Gerowitz into feminist icon Judy Chicago.

When Ms. Chicago went to grad school, Los Angeles’ art felt to her like a macho offshoot of minimalism. She remembers, in an interview with Lucy Lippard: “It was a period in L.A. when no woman artists were taken seriously. The men sat around … and talked about cars [and] motorcycles.” Her early paintings featured stylized ovaries and vaginal canals beautifully spray-painted on car hoods. Today, they foreshadow Matthew Barney’s biomorphic car-culture aesthetic, but at the time, they suffered the ridicule of male painting professors. Rainbow Pickett (1965), which was included in the Jewish Museum’s 1966 “Primary Structures” show, evokes a Robert Morris sculpture painted in pinks and turquoises. (Ms. Chicago later destroyed the work—on view here is a reconstruction.)

Ms. Chicago has a keen sense of how to use popular media. An Artforum ad of 1970 announces her first one-man show—she has crossed out “man” and replaced it with “woman”; “Gerowitz,” her first husband’s name, is replaced by “Chicago,” the name of her hometown. It’s a piece of myth-making performance art.

The documentation of her “Atmospheres,” ephemeral pieces such as a dissolving sculptural environment made from 37 tons of dry ice, is a highlight of the show. These works propose an alternative to masculine, achromatic minimalism. Her smoke bomb and firework sculptures conjured forms in purple and orange. They were, de facto, critical of consumer culture (they were difficult to own) and, in the era of Vietnam war protests, evoked explosive political actions. 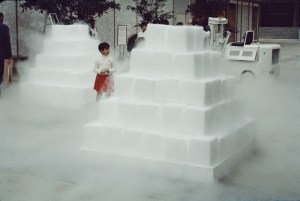 Large semi-abstract paintings follow, many of them featuring vulva-like flowers and butterflies (no mystification here: she calls some “cunt-caves”). She had begun to explore ceramic glazes. A series of lovely color wheel plates from 1974 test the properties of glazes in pinwheels of blues, yellows and shimmering lusters.

Ms. Chicago’s feminist pedagogy gets a room of its own. As a professor at Fresno State College and Cal Arts, she created women-only classes. The curriculum stressed Great Women (Sappho, Emily Dickinson) but contained a lot of levity: The program’s acronym was FAP, and one image documents women performing as pink-clad, bobbysoxed “cunt cheerleaders.” Ms. Chicago and her students started a feminist press, created alternative spaces and held workshops training participants in traditionally masculine-gendered media like welding.

By the time you get to the familiar Dinner Party (1979), on permanent display next to the exhibition, its details seem transformed by what you have seen. The pearlescent ceramic plates and forks emerge from the lusters and colors of Ms. Chicago’s ceramic glazes; the 39 women she represented here come from her program’s curriculum. Most powerful of all, after the isolation of her early years, is the sense of community the room engenders.

Ms. Chicago, who turns 75 this year, has a canny sense of how to tell her own life story. In the show, she comes across as the little Orphan Annie of the L.A. art world: a plucky outsider who brought down patriarchal minimalism with her spirited band of conceptual art friends. On April 26, Chicago will bring a 180-foot-high pyrotechnic sculpture to Prospect Park, making “Chicago in L.A.” “Chicago in Brooklyn.”