JERSEY CITY – The view from the sixth floor at St. Peter’s University’s Mac Mahon Student Center in Jersey City is sweeping. The windows facing the east show off the Jersey City and New York City skylines, while to the west, the under-construction Pulaski Skyway, Newark and the Watchung Mountains come into view.

At a conference on prisoner reentry held by chance on the morning of Holy Thursday and during Passover week, the theme of redemption was ever present, with discussion centered on how to successfully reintegrate those previously incarcerated into society.

But at the same time, three major New Jersey political players were also present, reminding those who study both politics and religion that forgiveness in Jersey politics far more resembles the Old Testament rather than the New.

Jersey City Mayor Steve Fulop, U.S. Attorney for the District of New Jersey Paul Fishman and Governor Chris Christie all came to discuss to prisoner reentry at a time of growing tension in the state’s political landscape.

But after Fulop became the leader of New Jersey’s second largest city, the dynamic between the political CEOs of Jersey City and New Jersey changed. Although heavily courted by the 2013 Christie re-election campaign, Fulop, a Democrat, spurned the Republican governor, failing to endorse him.

Fulop’s lack of campaign support for Christie might have earned him a place on a Port Authority of New York and New Jersey enemies list revealed when the George Washington Bridge lane closure scandal, a.k.a. Bridgegate, broke in January. It was a spot Fulop apparently earned long before he announced a lawsuit by Jersey City seeking $400 million would be brought against the Authority for missed tax payments and other alleged harms.

Since then, additional reports suggest that on other issues, such as the Pulaski Skyway repair, Fulop might have been stymied by the state government in terms of meetings requested.

After speaking to the more than 300 conference attendees, Fulop, a potential Democratic gubernatorial candidate, spoke to the press in the kitchen to the side of the stage, where he said he had just spoken to Christie, a likely Republican presidential candidate.

“This is the first time I saw him since my inauguration [in July 2013],” Fulop said. “I said that I appreciated him coming to Jersey City [on the prisoner reentry issue], and that was the extent of it. Communication is happening now between the state and Jersey City on the Pulaski and Port Authority issues.”

“I don’t want  to get into anything on the bridge stuff going on right now,” said Fulop when asked about which Christie staffers reportedly requested his endorsement. “That stuff will sort itself out.”

There are federal and state investigators now seeking to sort Bridgegate out.

Christie, once the federal investigator whose administration is now being investigated by Fishman, among others, reflected on the role of law enforcement in a context that could speak to issues beyond prisoner reentry.

“Who are we really trying to protect here, and who are we trying to make sure that we incarcerate because their offenses merit that?” Christie said, sitting across from the moderator, former New Jersey Governor James McGreevey. “Having worked for seven years as the chief federal prosecutor in the state and working with a lot of prosecutors, I think if there’s appropriate leadership at the top [it] says our job is to do justice. It’s not to win. It’s to do justice.”

Fishman, the U.S. Attorney for New Jersey since 2009, spoke before Christie on Thursday. According to attorneys who have worked in the U.S. Attorney’s Office in Newark over the years, Fishman and Christie differ at least on style and temperament, if not the law.

Fishman left the Jersey City conference before Christie spoke. The two men were not in the same room at the same time, although Fishman did speak briefly to Fulop before he left. He then spoke about a common cultural experience he shared with the mayor as he looked to the future.

“On Monday night, like Mayor Fulop, I sat at my family’s Passover Seder and reflected on the ideas of redemption and spiritual reawakening,” Fishman said. “Redemption is about the triumph of hope over despair – the belief that we all have the potential for change and maybe even to do it dramatically when the road is hard. And it [might] takes someone, sometimes a federal judge, or sometimes somebody else, to ask the question, look us in the eye, and say what do you need.” 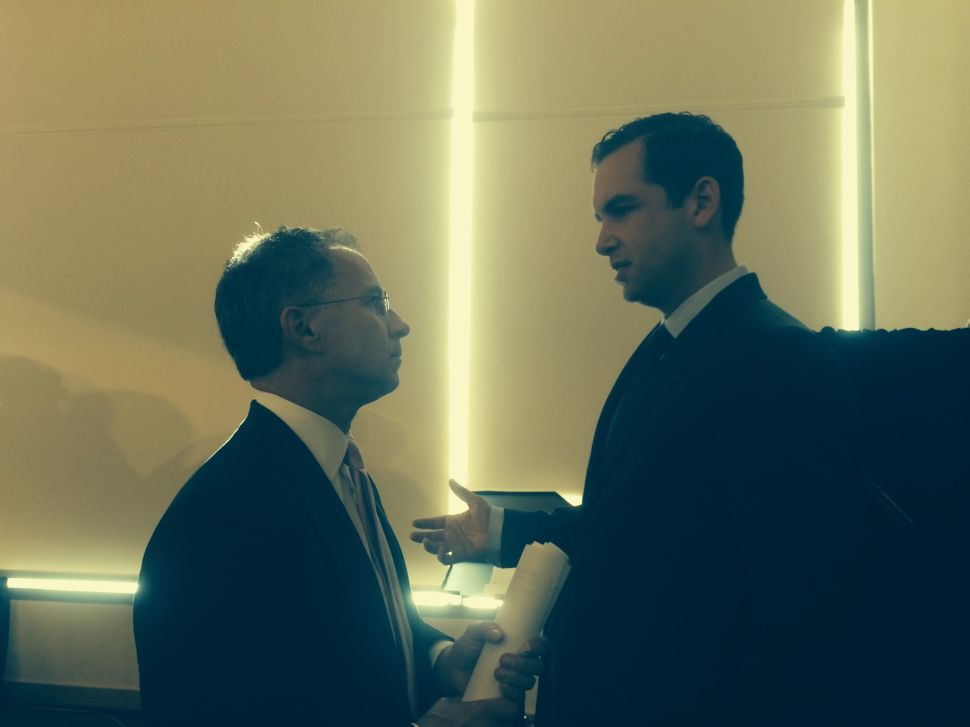