TRENTON – Gov. Chris Christie called on the state Assembly “not to play games anymore” and revisit a law the lower chamber allowed to sunset and which New Jersey mayors say is crucial to slowing property tax growth in the state.

The Republican governor, standing on the steps of the Trenton War Memorial before dozens of mayors and lawmakers, narrowed his comments to Assembly Democratic leadership and Speaker Vincent Prieto (D-32), who charged with putting the interests of a few ahead of New Jersey taxpayers.

“It’s not a partisan issue it’s a common sense issue,” said Christie, adding, “If we really want to protect the taxpayers of this state” the lower chamber would post the bill for a vote.

Christie was advocating the passage of a 2 percent cap on interest arbitration awards for unionized police and firefighters.

Late last month, Senate and Assembly lawmakers passed a bill that would extend the cap, which was set to expire at the end of March, until the end of 2017. The proposal that went through both chambers also significantly loosened the existing cap. In return, Christie conditionally vetoed the bill to add language to largely put it back in line with the existing cap.

“It’s time for the Assembly speaker and his leadership … to standup and reinforce our support of the taxpayers of this state,” Christie said. “We’re out here today just to make sure that the leaders of the Assembly know that we’re united in this cause and that we are putting politics aside.”

The governor made similar statements he’s delivered during his town hall circuit, but took a slight deviation from script when he called out the new Assembly speaker by name.

“Speaker of the Assembly, if you post this bill, believe me, it will pass,” he said. “It’s up to him. I stand ready to sign the bill.”

“We’ve got to continue to move forward and we need to continue to work,” said DiVincenzo, who recently attended one of Christie’s Essex County town hall events where the governor railed against lawmakers for failing to act on the cap.

“We have the largest budget in the state of New Jersey,” DiVincenzo said following the rally, explaining the reason he traveled to Trenton to support the governor and call on Democratic lawmakers to support the bill.

“I will be reaching out to him today,” he said, referring to the new speaker.

Ahead of the event, Prieto issued a statement calling the governor’s decision to hold rallies instead of agreeing to negotiations “disappointing.”

“I’ve asked the representatives of local officials to join me for discussions, but they have so far refused to offer any solutions. Still, they take time to join rallies. This is very unproductive and unfair to the taxpayers who deserve better,” Prieto said.

“I’ve made it clear – the Assembly stands ready to settle this issue through good faith negotiations that protect taxpayers and provide fairness to the police and firefighters who protect our safety,” he said. “The Assembly’s commitment to fairness must be met. That’s a balance everyone truly interested in reaching a compromise should be willing to support.”

The police and firefighter unions issued a statement imploring lawmakers to “buck the governor on this issue” to do the right thing for the state’s first responders.

“Governor Christie’s ‘way or highway’ approach has got to stop. He needs to stop dictating. This is America: A Democracy. Our state’s Legislative Branch deserves to have laws signed that reflect their voices even if the Executive Branch must give a little,” the statement read.

“The governor’s fear tactic is reprehensible,” it continued. “He wants everyone to believe that there are no local municipal leaders capable of negotiating their own contracts with their employees. He wants to dictate from the top.” 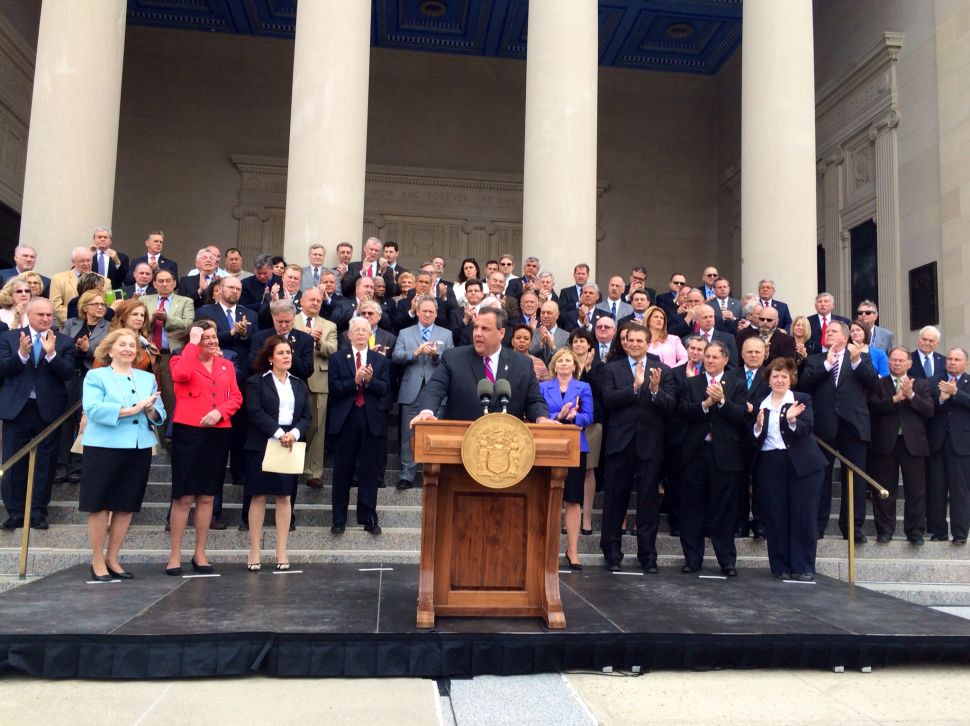