The gala circuit, as it gathers steam in early spring, can make one feel somewhat cynical. The succession of grandiose speeches, anemic benefit auctions and bags of cutesy swag induce a mild malaise. “This one feels upbeat,” said artist Jenny Holzer, one of the honorees at the annual Brooklyn Artists Ball on Wednesday, as she surveyed the room. It was true, the mood at the museum that night was buoyant. Perhaps it was the relief that the April snow the night before didn’t stick around, but people seemed to be enjoying themselves. As always, some women took the word “ball” and ran with it: sweeping floor-length gowns in Easter egg hues abounded.

Artist Dustin Yellin was spotted near the bar chatting to Mami Kataoka, who curated the traveling mega show “Ai Weiwei: According to What?” She said she, surprisingly, did not encounter any interference shipping the closely surveilled activist’s art out of China. “Luckily the government hasn’t really realized how much he works,” she said. “We must keep it a secret so he can keep going.” (We promised not to tell.)

Artist Chuck Close cruised along the wall of works being auctioned, a new feature at this year’s ball, and chatted a bit about George W. Bush’s much-discussed new paintings. “A failed president, a failed painter,” said Mr. Close. “It’s hard to tell which he was worse at. He hurt less people with the painting.”

“I think I saw those in the Whitney Biennial,” quipped Adam Sheffer, a partner at Cheim & Read, about the crude, distorted renderings of diplomats. Still, there’s a certain appetite for amateur portraits of Putin. “I swear, if you put those up in some gallery, people would seize them,” he continued.

In a corner, Pioneer Works, Mr. Yellin’s art center in Red Hook, had set up a 3-D printing center, where a scruffy young man was scanning a slightly nervous looking woman. He circled her slowly, wielding a device that resembled something between the Ghostbusters’ PKE meters and a staple gun. Guests could order 3-D printed busts of themselves after the event.

Artist Kehinde Wiley, one of the evening’s other honorees, said being feted by the museum felt “extraordinary.”

“I imagined coming out of Yale I would be penniless and struggling to buy paint,” he said. We mentioned that buying paint might get slightly harder, or sadder, with the likely loss of Pearl Paint, the legendary discount supply store on Canal Street. “Okay, it’s an official day of mourning,” declared Mr. Wiley, who hadn’t heard that the property has been listed for sale, rent or demolition. (Given his penchant for bright batik suits, it’s difficult to imagine Mr. Wiley in funereal black.)

In the dining room, 16 artists had turned the tables into sculptural affairs. Marianne Vitale adorned hers with white masks, while Oliver Clegg designed a circular table with inner and outer rings that rotated, exposing the diners to a new set of neighbors every so often.

Ghost of Dream, a duo comprised of Lauren Was and Adam Eckstom, used the detritus of art fairs to create large pyramidal centerpieces. The placards of booths belonging to the likes of Peter Blum and Marianne Boesky were covered with skinny diagonal stripes of tape that Ms. Was said were meant to confuse the eye in the migraine-inducing manner of art fairs. “The art fair is something that rides between something you have to do and something that’s not great for the art,” she added.

After dinner, everyone was funneled through a colorful narrow room, the walls of which were covered in candy. While some attendees like Jeffrey Deitch nimbly ducked through the sticky lollypop curtains and out the other side, into the dance party, others lingered to pluck gummy cherries off the walls.

Artist Mickalene Thomas did not partake. “I don’t have much of a sweet tooth,” she confessed. “It’s a sugar high I don’t want to be on.” 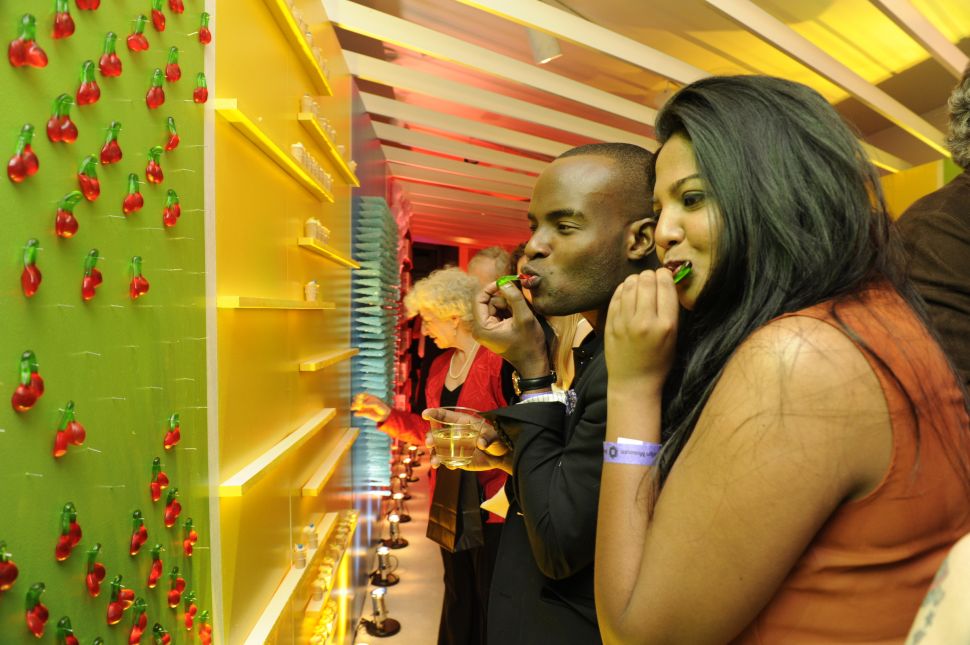