PATERSON – It looked like trouble for the Andre Sayegh campaign when cars with political operatives inside began circling City Hall.

A short time later, a convergence of people produced an air siren and sign onslaught as the council president tried to formally welcome the support of U.S. Rep. Bill Pascrell (D-9) and Assemblyman Benjie Wimberly (D-35).

“I think Andre is ready, capable, and I think he will make a great mayor,” said the veteran Pascrell, who stood with the candidate, Wimberly, Passaic County Democratic Chairman John Currie and other party players in front of the downtown government building with two weeks and a day before Election Day.

Brandishing “Paterson is not for Sale” signs, campaign personnel and attendant players from the rival Torres, Goow, Gilmore, Rodriguez and Jones campaigns descended on the event, plunging Sayegh and his allies into a war just to be heard.

Sayegh’s allies retaliated with their own cries of support for their candidate.

At the microphone in the wash of protests, Wimberly told the crowd he was happy to back the party chairman, and vowed to help move the city forward in 2014.

Later, PolitickerNJ asked him if his words constituted an endorsement of Sayegh and the assemblyman said, “Yes.”

The support by Wimberly and Pascrell signaled an ‘all-in’ approach to this race by the establishment behind Sayegh, which triggered an admixture of scorn, worry, fury and confidence among those members of the other six teams who appeared in the courtyard this afternoon to disrupt any show of Sayegh momentum.

So did activist David Gilmore, another candidate.

Grim at the head of the crowd beside Pascrell, Currie had a similar size-up in his public remarks.

“This is America,” said the party chairman. “We believe in democracy.” 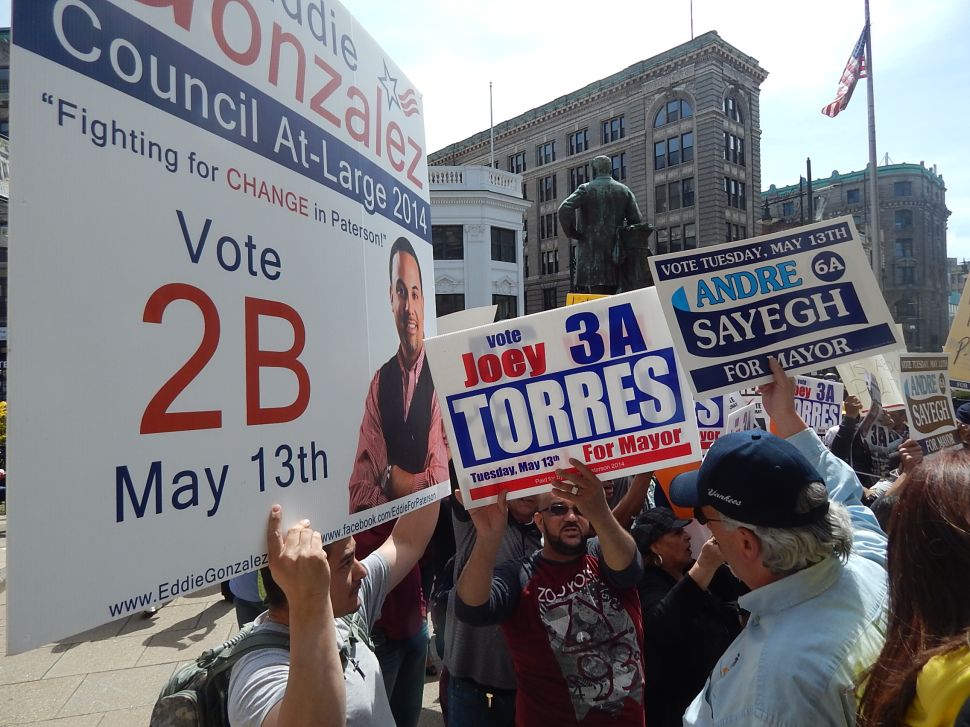