Craig Redman is 35, but his tastes veer toward those of a 3-year-old. This isn’t meant as a slight. Along with colleague Karl Maier, Mr. Redman, whose clients include Nike, Louis Vuitton and Vogue, makes bold, simple, ultimately hopeful art that would be equally at home in a child’s bedroom as it is on the wall of a gallery or the cover of a glossy magazine. Mr. Redman opts for reds, yellows and blues in his portraits, murals and sculptures, which are refreshingly upbeat. The stark, black outlines filled with color in Mr. Redman’s work seem innocent but conceal drama.

“I always think it’s quite strange that I’m drawn to primary colors, because I’m a bloody pessimistic person,” Mr. Redman says on a recent morning in his cozy studio apartment, situated in the storied Hotel Albert in Greenwich Village, where he lives with his partner, the fashion designer Thomas Chen. And yet Mr. Redman’s whimsical artistic sensibility shines through in matters of the home. Look no further than the cat, Pinot Grigio, a docile fluffy Persian who matches, quite perfectly, with the shaggy gray rug in the living room.

Let’s clear this up first: Did you or did you not buy the cat to match the rug? It may have crossed our minds when we saw her in rescue. [Laughs] I tried to talk Thomas out of getting her, but he was desperate for a flat-faced cat.

Your apartment is small but comfortable. Do you feel at home here? I totally love it here, because I’m surrounded by shit that I love. It’s eclectic and weird, and there are little things you can focus on even though it’s small. It brings me immense comfort. How did you go about designing the place? I don’t think there was any design that went into this place at all. As you accumulate, you move things around to fit.

But the two chairs at the dining table, for instance, are bold and bright, like your artwork. Surely some thought went into that. Definitely. I’m just drawn to that kind of stuff. Whenever I see some ridiculous, brightly colored thing, it’s like a cat to a laser beam—and off I go toward it.

Perhaps the colors soothe you. I think they do. For some people, they’re just too aggressive. For me, they bring happiness; maybe that’s part of the appeal. They’re kind of gross colors—they’re quite lurid—but you get to a point where you understand which kinds of gross colors work. Pink and orange can be a pretty hideous combination, but in my artwork, especially, there are ways to make it work, through proportion—small pink and big orange, for example—or mixing patterns, which unites them. The living room, featuring a portrait by Craig Redman. (Photo by Emily Assiran)

So that’s how you go about making your portraits? The idea of the portraits is breaking people down and focusing on each element. Yes, you see it as a face, but then you start noticing the bags under the eyes, the weird area between the eyebrows and the eyes, the bald patch in the beard under the bottom lip that hair just generally doesn’t grow in. They’re just weird things you wouldn’t notice, accentuated with patterns.

One of the patterns in the portrait on your wall looks like the Scottish flag. Was that done on purpose? No, but I am influenced by flags—marine flags, national flags—which is a weird thing to say. They’re super graphic—a red line next to a yellow line, for instance. It’s kind of reflected in my work.

How do you feel about the Union Jack, which is featured in the flag of your homeland? It’s a little too fussy for my liking. The French flag is perfect—three vertical, different-colored stripes. You couldn’t ask for more. The American flag is also amazing—patterns and colors. There are so many interesting works of art on your walls, from Olaf Breuning to David Benjamin Sherry to Oscar Carlson. How did you accumulate all of them? I collect a little bit, but there’s no plan. If I see a piece that I like or if I’ve watched a piece I like for a while and there’s an opportunity to get it, then I usually jump in. There’s no theme, there’s no schedule—just whatever happens. Or I exchange work with other artist friends.

Do you often look at the artwork, or are you kind of over it by now? For sure we look at it. We rotate it a bit so we have different things to see as well. I have some stuff at my studio, too, which sometimes comes here.

What kind of mural are you imagining? I’ve had this conversation with Karl. We’re working on a big mural now. It may not get approved, but ultimately I would like to put the equivalent of a French flag—three stripes—on the wall. Just reduce it to its most simplistic forms. 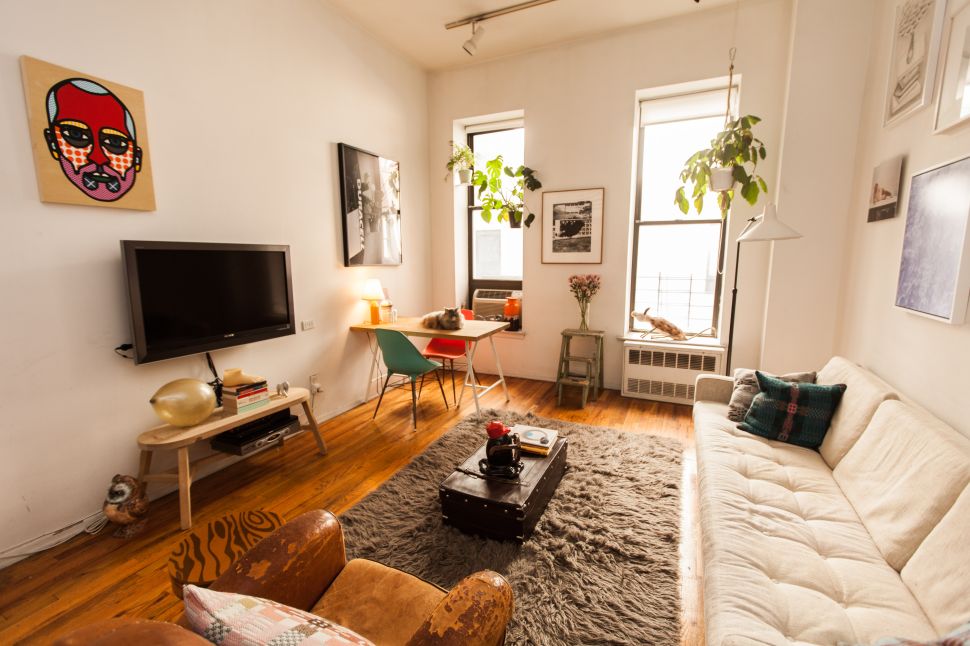